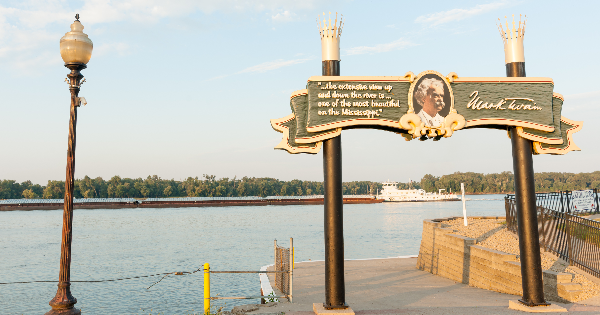 A trip to Hannibal, Missouri, should be a must for everyone. From the Lighthouse to Lover’s Leap, the town is as picturesque as can be. It’s also the boy-hood home of Mark Twain.While vacationing there one summer, my 10-year-old son learned a little about Tom Sawyer and Huck Finn. I knew I had him hooked on one of America’s great writers when he asked, “When we get home, can we paint the fence?”While my boy was immersed with the world of forever fourteen, I happened to strike up a conversation with the ghost of Mark Twain himself. The following notes are from our dialogue. Every word quoted below is from the tongue (or quill) of Mark Twain; some may be just a little out of context.But as Mark Twain would say, “Always acknowledge a fault frankly. This will throw those in authority off their guard and give you opportunity to commit more.” – Don Mathis

Do children disrespect all figures of authority, or just their fathers?

It is a wise child that knows its own father, and an unusual one that unreservedly approves of him.

Are fathers always portrayed as dupes?

When I was a boy of 14 my father was so ignorant I could hardly stand to have the old man around. But when I got to be 21, I was astonished at how much the old man learned in seven years.

Now that’s not entirely true from your experience, is it? Your own father died when you were very young.

Many fathers today are distressed that they are removed from their children’s lives by the courts.

One cannot have everything the way he would like it. A man has no business to be depressed by a disappointment anyway; he ought to make up his mind to get even.

I believe you know how divorced dads must feel. Although you lost no children from a court order, you outlived all but one.

It is one of the mysteries of our nature that a man, all unprepared, can receive a thunder-stroke like that and live. There is but one reasonable explanation of it. The intellect is stunned by the shock and but gropingly gathers the meaning of the words. The power to realize their full import is mercifully lacking.

Some people trivialize the feelings of men who are removed from contact with their kids. These same people give no regard to the child’s loss of a parent.

Nothing that grieves us can be called little: by the eternal laws of proportion a child’s loss of a doll and a king’s loss of a crown are events of the same size.

Some ‘experts’ say to be strong; when your child is 18, they will see the injustices perpetrated on them by the parent who alienates the affection of the other parent.

This curious and pathetic fact of life: that when parents are old and their children grown up, the grown-up children are not the persons they formerly were; that their former selves have wandered away, never to return again, save in dream-glimpses of their young forms that tarry a moment and gladden the eye, then vanish and break the heart.

But still, men are expected to always take the high road.

Always do right. This will gratify some people, and astonish the rest.

Even though it will enrich the undeserving?

I would like a chance at preserving my own wealth.

Few of us can stand prosperity… Another man’s, I mean.

Tell us about love and marriage.

Love is a madness; if thwarted it develops fast. Marriage – yes, it is the supreme felicity of life. I concede it. And it is also the supreme tragedy of life. The deeper the love the surer the tragedy. And the more disconsolating when it comes.

Both marriage and death ought to be welcome; the one promises happiness, doubtless the other assures it.

Just as many women complain they receive less salary than a man for the same job, many men believe divorce courts are prejudiced towards men.

No civilization can be perfect until exact equality between man and woman is included.

Do you think our country’s lawmakers are up to the task?

Can we expect good results from our government?

Those people… can always be depended on to take any reasonably good law and interpret the common sense all out of it.

It’s so hard to find men of a so high type of morals that they’ll stay bought.

You make them sound like a bunch of thieves.

There is no distinctly American criminal class except Congress.

Aren’t they supposed to be our public servants?

Public servants: Persons chosen by the people to distribute the graft.

Are lawyers any better?

To succeed in other trades, capacity must be shown; in the law, concealment of it will do.

Is America ripe for reformation?

Nothing so needs reforming as other people’s habits.

Can the common citizen do anything?

The administration of the law can never go lax where every individual sees to it that it grows not lax in his own case, or in cases which fall under his eyes.

Why can’t people agree on a few basic truths?

It were not best that we should all think alike; it is difference of opinion that makes horse races.

But there is such adversity to be suffered with such injustice.

By trying we can easily learn to endure adversity… Another man’s I mean.

Isn’t there a common ground anywhere?

The universal brotherhood of man is our most precious possession – what there is of it.

Are you saying we should part with the illusion of brotherhood?

Don’t part with your illusions. When they are gone you may still exist, but you have ceased to live.

Do you think our jury system is fair?

Its efficiency is only marred by the difficulty of finding twelve men every day who don’t know anything and can’t read.

Are our judges fair?

The difference between a bench of judges and a basket of vegetables was as yet so light that we may say with all confidence that it didn’t really exist.

Is the system just?

The rain … falls upon the just and the unjust alike; a thing which would not happen if I were superintending the rain’s affairs. No, I would rain softly and sweetly on the just, but if I caught a sample of the unjust outdoors I would drown him.

Sometimes a woman will boast she is the best parent.

Noise proves nothing. Often a hen who has merely laid an egg cackles as if she had laid an asteroid.

Why does a judge often listen to such cackling?

The thug is aware that loudness convinces sixty persons where reasoning convinces but one.

Shouldn’t the principle of diplomacy be observed?

Thou shaft not commit adultery is a command which makes no distinction between the following persons. They are all required to obey it: children at birth. Children in the cradle. School children. Youths and maidens. Fresh adults. Older ones. Men and women of 40. Of 50. Of 60. Of 70. Of 80. Of 100. The command does not distribute its burden equally, and cannot. It is not hard upon the three sets of children.

Doesn’t morality enter into divorce courts, if not the marriage?

What marriage is to morality, a properly conducted licensed liquor traffic is to sobriety.

What about the morality of the rest of society?

The low level which commercial morality has reached in America is deplorable. We have humble God fearing Christian men among us who will stoop to do things for a million dollars that they ought not to be willing to do for less than two million.

Is endurance a factor in court proceedings?

There is nothing comparable to the endurance of a woman. In military life she would tire out an army of men, either in camp or on the march.

Do courts favor breeding and wealth?

Good breeding consists in concealing how much we think of ourselves and how little we think of the other person.

What about no-fault divorce?

No one is willing to acknowledge a fault in himself when a more agreeable motive can be found for the estrangement of his acquaintances.

Will truth always win out?

Truth is mighty and will prevail. There is nothing the matter with this, except that it ain’t so.

So, should one lie?

If you tell the truth you don’t have to remember anything.

Does the government care about a child’s opportunity to see both parents?

Should we try to have the laws changed?

Laws are sand, customs are rock. Laws can be evaded and punishment escaped, but an openly transgressed custom brings sure punishment. Customs do not concern themselves with right or wrong or reason.

So in the end, what can we do?

Let us endeavor so to live that when we come to die even the undertaker will be sorry.

Previously published in The Fourteen Percenter