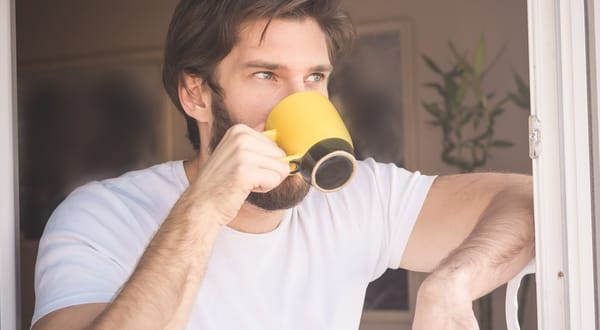 —
My mother began to make regular stops at a downtown Tim Hortons location on the way to work in the mornings. As a youth on my way to school with a penchant for junk food, this was great. If I didn’t feel like eating toast and cereal I went with coffee and donuts from the popular chain.

Sometimes breakfast was coffee and éclairs. It was whatever kinds of garbage I could possibly eat those mornings. Having coffee every few mornings ended up magnifying my already abnormal intake of caffeine that my sped-up overactive brain did not truly need. During my high school years I was coping with what felt like a significant amount of mental health problems. In a way, I might have used caffeine as an excuse to try to hide those issues within a cranked up overactive mind.

It could have been an attempt by me to be more grown-up. Perhaps I enjoyed the offbeat rush that caffeine was providing. There was nothing healthy about it. On top of the morning coffee, I managed to convince a group of teachers at my school to let me into their mini-lounge to make coffee from the maker they had brought in. I was among the first of a few students who would load up on caffeine in hope that it would get me through a dreary day in that shitty run-down rural high school.

Throughout my teens, coffee became a bit of a comforting vice. It was comfort on the cold days. It was a warm-up to the warm weather days. Whether it was cold outside or cold inside my own head, there was always that morning coffee before heading to class. Sometimes it is the warm-up before a cup of tea. I still prefer tea over coffee overall. The health benefits of green tea are well-known and thanks to Sir Patrick Stewart’s brilliant portrayal of a Starship Captain with an affinity for Earl Grey, I keep plenty of it around.

Into my late teens and beyond, I stopped drinking the coffee from Tims and actually can no longer taste it without comparing it to what an ashtray full of what cigarette butts smell like. How the times have changed indeed. During my time living in Northern Ontario I started to develop an appreciation for coffee that was roasted locally. The inviting aromas of roasted java would punctuate the air at the local farmers market on a Saturday morning. By this point I was making the occasional morning stop at Starbucks and realizing how pricey a decent cup of to-go coffee would be. Having market coffee meant I could spend a little less money and enjoy something that was roasted locally.

Coming back to Nova Scotia, I was introduced to more coffee roasting companies than I could have even imagined existed. The great local roasters here are always out to do something unique and refreshing. Maybe I have become a bit of a coffee snob because of my evolved tastes.

Just think, if I had been a coffee snob in 9th grade. Would it have been another reason to have to run and drive away from the boxing champions of the school hallways?

This post was previously published on www.dannalexander.com and is republished here with permission from the author.
—
Photo credit: Shutterstock.com