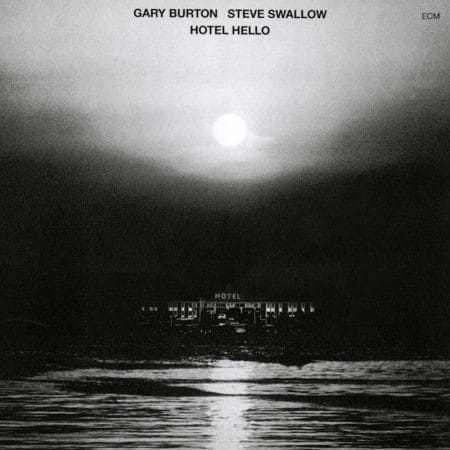 Discovering ECM Records as a young musician and writer was such an awakening. In order to hear some of the people I was reading about in Bass Player Magazine I had to check out these kinds of records. It was not until I was living in Calgary and becoming a loyal customer of Recordland that I was able to get some of those recordings. My record and CD collection contain a healthy supply of ECM music that I will never part with.

Bassist and Composer Steve Swallow’s work continues to be a source of inspiration. This particular record is a blissful soundscape put together with virtuoso Vibraphonist Gary Burton. It is in regular rotation when I’m working in my home office. If you have any sort of connection with music, there are lots of things that draw you to make that connection.  When I discovered I could get my hands on some of these ECM recordings, it opened up a greater world for me to find work from the bass players of the world who I wanted to hear more of. Or in some instance, just hear something of them.

Hotel Hello clocks in at just over a half hour. It’s a half hour that I have happily turned into an hour if the mood strikes me. The majority of the compositions are written by Swallow.  Burton is co-credited on “Impromptu”, while Mike Gibbs’ “Inside In” and Carla Bley’s “Vashkar” round out the composers credited on this record. Bley and Swallow have been together as a couple since the 1980s. They remain constant musical collaborators.

“Hotel Hello” knocked me out at a time when I was really getting more into jazz having acquired so many different records on my trip to Recordland. On the particular trip when I bought this record, there was also a few other albums added to my collection where Steve was playing bass. Another notable album among those purchases was “Passengers”.  Passengers was the Gary Burton Quartet with another of my all-time great bass heroes, Eberhard Weber. That particular record features early composition work from guitarist Pat Metheny. What makes this particular record stand out is having two basses playing through all of it, Swallow picking away on his bass guitar and Weber breezing through with his 5-string electric upright. The album is worth checking out even just for the arrangement of Chick Corea’s masterpiece “Sea Journey”.

Hotel Hello inspired a piece of poetry that I would read at a public performance in Calgary back in 2003. Using the same title as the album, I wrote a nod to Hotel Hello with the idea of driving for long hours and looking for a place to stay just to rest for the night. The deeper meaning behind what I wrote was to park my constantly racing mind for a night. Wanting it to check into a hotel and stop any feelings of anxiety. The piece made its’ way into the Calgary Stroll of Poets 2003 Anthology “Salvo”.

This record is one of many that continues to offer a splendid reflection back into some moments of creative inspiration. It remains part of my chill out soundtrack that spins in my home office. Over 40 years since its’ release date, it remains an interesting chapter in the history of jazz music and the ECM catalog.

This post was previously published on Dann Alexander and is republished here with permission from the author.

Facebook1TweetPin5EmailShares6
wpDiscuz
0
0
Would love your thoughts, please comment.x
()
x
| Reply
Share this ArticleLike this article? Email it to a friend!
Email sent!