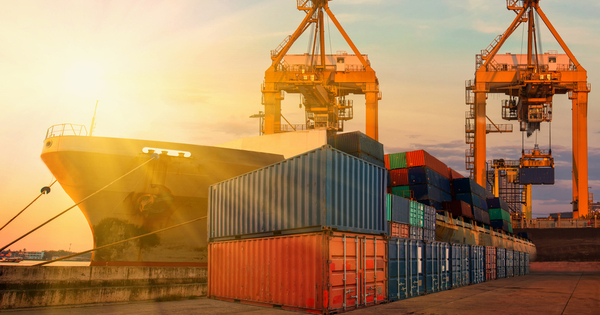 Containerization was a massively important innovation which powered the expansion of global trade but it was a difficult idea to implement.

Before containerization, goods were physically manhandled as break bulk cargo. At the factory or warehouse, goods were loaded onto a truck, driven to a port and then offloaded to await the next suitable ship. The dockers (aka longshoremen) piled boxes, barrels, and sacks onto wooden pallets secured with ropes. The pallets were then hoisted onto the ship where more dockers would carry each item and fit it snugly into the ship’s hold. This was difficult, time-consuming and dangerous work – many dockers were injured or killed at work.

When the vessel was eventually fully loaded it would set off. It might easily have over 1000 different loads on board – each with its own paperwork. If the ship had to visit more than one port to deliver goods then dockers had to find and pick the items to be offloaded and then reposition the remaining cargo. Once delivered the goods were loaded onto trucks and sent to their destinations. Multiple handling and delays made transport costly, time-consuming and unreliable. Each day in port is expensive for ship owners and fractious dockers would use strikes and go-slows in order to secure better terms.

The idea for a better way of doing things had been around for some time. It was simple – put things in big boxes and move the boxes. In 1766 in England James Brindley designed a box boat with wooden containers to transport coal by canal to Manchester. As early as the 1830s, railroads such as the Liverpool and Manchester Railway were using containers.

But there was opposition. Trucking companies, shipping companies, and ports could not agree on a standard. Some wanted large containers and others wanted small. The dockers’ unions were strongly opposed to the idea as they correctly saw it as a direct threat to their levels of control and employment. The freight sector was highly regulated and regulators were happy with the status quo.

The man who changed all this was Malcolm McLean. He was born in 1913 in North Carolina. His family was poor. They could not afford to send him to college but they could afford a second-hand truck. Together with his brother and sister, he founded the McLean Trucking Company.

In the 1950s McLean foresaw the great potential of containers and he used his commercial expertise and political shrewdness to make things happen. He was an expert in trucking but could not persuade shipping companies to adapt their ships for containers. He borrowed $22 million from the bank and bought two World War II tankers which he converted to carry containers on and under deck.

On April 26, 1956, with 100 invited dignitaries present, one of the converted tankers was loaded and sailed from New Jersey to Houston Texas, carrying fifty-eight 35-foot containers, along with a regular load of liquid tank cargo. As the ship left the port, Freddy Fields, an officer of the International Longshoremen’s Union, was asked what he thought of the new container ship. Fields replied, “I’d like to sink that son of a bitch.”

It is estimated that in 1956 hand-loading a ship cost $5.86 a ton. Using containers, it cost only 16 cents a ton, a 36-fold saving. Containerization also greatly reduced the time to load and unload ships.

McLean designed and patented the standard container; 8 feet tall by 8 ft wide by 10 ft and made from thick corrugated steel. The design incorporated a twist-lock mechanism at the corners, allowing the container to be easily secured and lifted using cranes. He then gave the patented designs to industry; thus enabling international standardization of shipping containers.

McLean achieved a huge breakthrough in the 1960s when he persuaded the US military to use his containers to ship equipment to Vietnam. They became a key part of one of the first integrated logistical systems – now common across the world. McLean shipped the empty containers from Vietnam to Japan where they were filled with consumer goods and then transported back to the USA.

Nowadays people across the globe enjoy the benefits of cheap products made far away – cars, toys, electronic goods, clothes, and appliances. They are all shipped in containers and using the systems that Malcolm McLean developed.

McLean died in New York in 2001. Forbes Magazine called him, “one of the few men who changed the world.” On the morning of McLean’s funeral, container ships around the world blew their whistles in his honor.