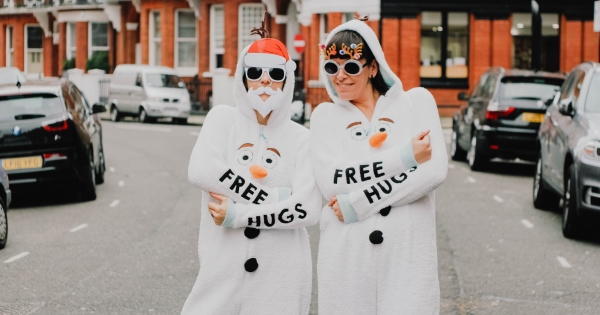 I usually don’t think much about ugly Christmas sweaters. They seem harmless enough. But as a public school teacher, I have learned that there are few things that are truly harmless.

Before I talk specifically about sweaters, I’ll recap teacher rights and limitations with regards to religious expressions.

On the one hand, as U.S. citizens, we have the First Amendment right to practice our religious faith, whatever it is, and to express our beliefs, whatever those are… as long as we’re not at work.

When we’re at work, we’re agents of the government as far as the Bill of Rights is concerned. Hence, we’re not allowed to show preference for adherents of one faith over another. If something we do makes a student, any student, feel like we think less of their faith, that’s a violation of the First Amendment.

So where does our clothing fall? If we’re wearing religious clothing, are we expressing our own faith (great!), or are we showing preference for one faith over another (terrible!)?

Ironically, the answer is clearest for the most pious of religious wear. Jewish yarmulkes, Muslim hijabs, Sikh turbans, and Christian clerical collars are all protected because they are considered intrinsic, if not mandatory, items.

The answer is less clear for items that reflect our faith, but which are not per se intrinsic to it. I’m fairly certain the courts would frown upon a teacher wearing a shirt emblazoned with a crucified Jesus looking pleadingly up to heaven, with the caption “Christ is the only path to salvation.”

Which brings us to ugly Christmas sweaters.

My initial impulse when this came up as a discussion item in a teacher forum on social media was to argue that these are all secular symbols anyway. There are, after all, two sets of Christmas iconography: The nativity, and the symbols that were taken from early Christian plundering of pagan stories.

But… not so fast. It’s true that some elements of the Santa Claus story may have roots in German folklore, it’s true that the evergreen tree has nothing to do with Israeli flora, and it’s true that Christmas is where it is not because the Roman Catholic Church thought that’s when Jesus of Nazareth was born (they didn’t), but because they wanted to co-opt existing Roman Pagan holidays around the Winter Solstice.

Are those arguments, though, in favor of seeing such symbols as being secular, or are they reminders of the way in which European Christianity has and continues to appropriate everything from everyone and call it their own?

Consider Christmas songs like “Baby, It’s Cold Outside,” “Jingle Bells,” “Winter Wonderland,” and even “Over the River and Through the Woods.” If you stopped partway through that sentence and got ready to tell me that those aren’t all Christmas songs, good. That’s the point. None of them are.

“Over the River and Through the Woods” specifically mentions Thanksgiving. “Jingle Bells” and “Winter Wonderland” are generic celebrations of wintertime. “Baby, It’s Cold Outside” first appeared to the masses in a romantic comedy that had absolutely nothing to do with Christmas.

Because of the cultural default of Christmas, though, they’ve become largely associated with Christmas. That’s the point.

“Happy Holidays” has become a strained surrogate for “Merry Christmas,” and the more we insist that it isn’t, the more it feels like it is. Hanukkah isn’t a major Jewish holiday, but it has become one in the United States in large part because it’s always near Christmas. I’m not sure, but it seems like the major reason why Kwanzaa was placed when it was is because of Christmas. And we don’t really mean to include the New Year, because we gladly say, “Happy New Year.”

Pagan festivals like Yule and Saturnalia pre-date Christmas, but modern adherents are few and closeted: If “Happy Holidays” was really a reflection of America’s true religious tolerance, neopagans wouldn’t generally feel the need to hide. And because the Muslim calendar is lunar and doesn’t have adjustments (like the Jewish calendar does), the two major Muslim festivals move relative to the Gregorian solar calendar, and hence usually aren’t near Christmas.

We largely say “Happy Holidays” because we want to say “Merry Christmas” but we don’t want to appear to be insensitive, or because we’re not Christian but don’t want to be outed. So we hide it, just like we often call school breaks during this time “Winter Break” when everyone knows full well that it’s Christmas Break.

On the one hand, it’s true that the evergreen tree, elves, or even the snowflake, were not originally Christmas symbols. But these symbols have become associated with Christmas, and when we put them on our clothing, we’re supporting that narrative, even if we don’t mean to.

For a student who practices a minority faith, being surrounded by Christmas images is a reminder of that. We may not be actively coercive in doing so, but a student may feel pressured or alienated nonetheless.

“But I didn’t mean to…” is behind nearly every defense of innocent microaggressions. Many, if not most, microaggressions are from well-intended acts. I don’t think any teacher who dresses up like an elf thinks, “Ha ha! I’m going to really stick it to my Jewish students today!” It’s fun. It’s festive.

In the school where I work, most of my students are Muslim. Many of them love the quasi-secular symbols I’m talking about here. Some even asked me to dress up as Santa Claus for a PSA they were making.

I declined, because ultimately, my job isn’t about “most” of my students, it’s about all of my students, and if I increase the feelings of alienation in one or two students by supporting the Christian-default symbols of the season, I’ve failed at that.

I’m not sure if an ugly Christmas sweater is ever going to lead to a Supreme Court prohibition. I don’t think a knitted reindeer with a red pompom nose is in the same vein as an anguished Jesus pleading to the heavens, and it’s certainly not in the same vein as teachers leading prayer circles before tests.

Quasi-secular Christmas symbols are “mostly harmless.” But if you’re a teacher, or a parent, it’s worth reflecting on that “mostly” a little bit before you lean back on “But I didn’t mean to….”
—

—
Photo by Toa Heftiba on Unsplash

FacebookTweetPinEmailShares172
wpDiscuz
0
0
Would love your thoughts, please comment.x
()
x
| Reply
Share this ArticleLike this article? Email it to a friend!
Email sent!