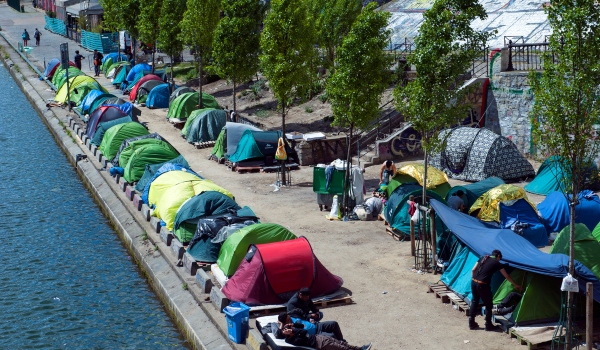 —
LONDON, 20 March, 2018 – The number of climate refugees – people migrating to escape the effects of the warming climate – could reach many millions in barely 30 years from now, the World Bank says.

The total is a conservative one: it is based on just three regions of the developing world, and considers only people migrating within their own countries, not those seeking a new life abroad.

A World Bank Group report says the worsening impacts of climate change in sub-Saharan Africa, South Asia and Latin America could mean that by 2050 more than 140 million people had moved within their own countries’ borders, creating a human crisis and threatening development.

But concerted action – including global efforts to cut greenhouse gas emissions, and robust development planning at country level – could sharply reduce this worst-case scenario, the report says – by as much as 80%, or more than 100 million people.

In another perspective on climate migration, other analysts argue that it can be a valid way of adapting to a warmer future.

The Bank’s researchers say their report is the first and most comprehensive study of its kind to focus on the link between slow-onset climate change impacts, internal migration patterns, and development in three developing regions.

It defines climate migrants as people forced to move from parts of their countries where life is increasingly unsustainable because of worsening problems like water scarcity, crop failure, sea-level rise and storm surges. They would be additional to the millions of people already moving within their countries for economic, social, political or other reasons.

The World Bank CEO, Kristalina Georgieva, says the report is a wake-up call to countries and development institutions. “We have a small window now, before the effects of climate change deepen, to prepare the ground for this new reality,” she said.

“Steps cities take to cope with the upward trend of arrivals from rural areas and to improve opportunities for education, training and jobs will pay long-term dividends.

“It’s also important to help people make good decisions about whether to stay where they are or move to new locations where they are less vulnerable.”

“As a means of survival for us and our animals, we are forced to continuously migrate despite all the risks involved”

They looked at three potential climate and development scenarios, comparing the most “pessimistic” (high greenhouse gas emissions and unequal development paths) with “climate-friendly” and “more inclusive development” scenarios in which climate and national development action increases in line with the challenge.

Across each scenario, they applied demographic, socio-economic and climate impact data at a 14-square kilometre grid-cell level to model probable shifts in population within countries.

This approach identified major “hotspots” of climate in- and out-migration – areas from which people are expected to move, and urban, peri-urban and rural areas to which they will try to move.

“Without the right planning and support, people migrating from rural areas into cities could be facing new and even more dangerous risks,” said Dr Rigaud. “We could see increased tensions and conflict as a result of pressure on scarce resources.

“But that doesn’t have to be the future. While internal climate migration is becoming a reality, it won’t be a crisis if we plan for it now.”

But there is an argument that migration is anyway a successful way of adapting to climate change, and that all governments should legalise and regulate temporary climate migration, both within and between countries

Alex Randall, co-ordinator of the UK-based Climate and Migration Coalition, writes in an opinion article on Al-Jazeera: “Governments should be harnessing, rather than preventing, the use of migration as a climate adaptation strategy.

“Governments must begin to understand that allowing this to happen, making it legal and facilitating it, is their best option. The alternative is trying to prevent it and creating a crisis,” he argues.

Randall quotes Hindou Oumarou Ibrahim, an indigenous woman from the Mbororo pastoralist community of Chad, who says: “Migration has now become an inevitable method of adaptation for us … As a means of survival for us and our animals, we are forced to continuously migrate despite all the risks involved.”

Randall says: “Governments often fail to understand that people will migrate, even if a safe, legal option doesn’t exist. They have a stark choice ahead of them.

“They can either facilitate safe, legal migration. Or they can attempt to stop people moving and create crises like the one that is currently unfolding along Europe’s southern coastline.” – Climate News Network

Facebook95Tweet3PinEmailShares98
wpDiscuz
Share this ArticleLike this article? Email it to a friend!
Email sent!