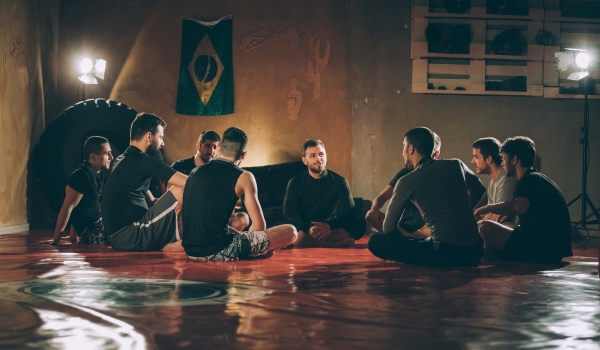 —
In my Sunday morning Aikido Seminar the strong, wise French Sensei instructed us in the Art of the Jo, the wooden staff. Through her interpreter, she said, “Enter the attack and die with honor.” That has resonated, ever since. And I’ve trained in Aikido for 30 years.

The Lesson: Be present, surrender to winning or losing. Bruce Lee said, “Learn the way to lose. Learn the Art of dying” And be freed of it. When ‘it’s on’, you don’t know the outcome. What happens, will happen. Have honor in what I do.

At the core of #Metoo and the pervasive realm of sexual abuse by those in power, who think they are entitled to assault or abuse others, because they deem their victims as somehow lesser than them is only about: Winning.

To be perfectly transparent, those who abuse others, who are also predominantly men, because they view others as lesser than themselves are vile and repugnant. This abusive behavior has no place in our society at all. Not at all. These people who do so are dickheads. They’re jerks.

Yet, do we have compassion for the jerk, for the dickhead?

Let me frame it this way. I’ve been a dickhead in the past – not on the extreme scale of emotional or physical effect, not at all in the realm of Harvey Weinstein. He’s King Dickhead. Yet, I have been unkind. I’ve received an unkindness.

Jesus said, “He that is without sin among you, let him first cast a stone…” I need to, we all need to look at our own selves, before we can judge another. That’s Life’s Lesson of Humility. We’re all human. We’re all imperfect. We all will and shall make mistakes. The gold is learning from those mistakes, and moving forward.

In the Japanese aesthetic wabi-sabi: There is beauty in our imperfection. We do what we can to become the greater human being, work on our imperfection. I discover wabi-sabi in my Aikido training, my morning meditation, my writing. We do what we can to evolve, to grow into our greater than versions. That requires dedication and grinding it out. Be kind to others and ourselves. Have compassion for others, and ourselves as well.

As for compassion for the jerk, the abuser of others? Yeah, sure. But let me context it in this way. Werner Erhard said that we get to choose who we are going to be in any moment. We do. I don’t have any true influence over another. Much like I can never really know what goes on inside another human being. Yet, I can try to get, who they are. I can have compassion.

Compassion? Yes. But I can’t grind out becoming their greater than versions. THEY have to grind it out. They do. Period.

The abusers and sexual assaulters in #Metoo are essentially glorified bullies. Part of the pathology of bully is recurrent patterns of behavior. Basically, bullies are the outcome of those, who were bullied by others, often family or parents. It’s the ‘bad’ gift that keeps on giving. Growing up with the abusive Father, I get it. Yet, ultimately who I become is my choice. No legitimate excuses.

Over 10 years ago, I did some System Engineering Training in Deer Creek, Colorado. While there I for a week, I worked out at the Littleton YMCA. Littleton may sound very familiar. In 1999 two teenagers shot and killed 13 students at Columbine High School in Littleton, Colorado.

You wouldn’t think that in the realm of possibility visiting that YMCA. Many of the kids there were from Columbine High School. So were their parents. I spoke with some of those kids and parents. They were kind decent people.

Yes, this might be the extreme embodiment of “jerk”. Yet, could anything have been done to prevent what happened with these murderer teens at Columbine? No doubt, they flew under the social radar. It’s even documented that those teens suffered bullying in school.

We must have compassion for everyone, and do our best to bring everyone up with us. Yet, they have to do the work. They have to make it work. Because the consequences are so very costly.

Sure, if some dude wants to bully or abuse me, I tell him straight up, “Do you really want to do this?” If it is, then like the wise French Sensei: “Enter the attack and die with honor.” From my experience, bullies are only about winning. They fear losing, perhaps more than dying itself. It’s all ego. It’s all about them.

I could lose or I could win. Either way, that conflict is such a fucking waste of time. It’s not my job to make someone a better person. It’s theirs.

Yet, even knowing that at times holds little consolation.

Matthew Shephard died on October 12, 1998 from injuries sustained from his beating in Laramie, Wyoming. On October 6, 1998 the 21 year-old University of Wyoming student was abducted, beaten, tied to a fence and left for dead. He died a few days later. Matthew was beaten mercilessly by Aaron McKinney and Russell Henderson. All this, because Matthew was gay?

Matthew was drinking a beer at a bar, while planning events for LGBTQ Awareness Week. Apparently, Aaron and Russell posed as gay and offered Matthew a ride home.

Matthew was beaten 20 times to his head with a pistol. Aaron and Russell stole his shoes. Tied him to a fence and left Matthew to die. A cyclist found Matthew. Because of the severity of his injuries, Matthew died several days later at a hospital in Colorado.

During their murder trial, Aaron and Russell’s defense attorney’s argued the “gay panic” defense. Aaron and Russell’s ‘story’ was that gay Matthew made homosexual advances at them, so they being straight reacted accordingly. WTF? Apparently, that defense is still used in some states. Having dismissed the death penalty, both Aaron and Russell agreed to serve double life sentences.

Fortunately, legislation took up Matthew’s cause in the Laramie Project. In 2009 President Barack Obama signed the Hate Crime Act.

Could you or I have done anything to alter, say Aaron and Russell from what they became? I really don’t think so. Our sphere of influence over others is very limited, if not presumably inconsequential.

We do have influence, are at cause in who we are. I know at least for me, it’s on-going training. You and I really need to get the words of O-Sensei Morihei Ueshiba, “True victory is victory over oneself.” I have to constantly overcome me. Obviously, no one else can.

I can have compassion and appreciate the suffering of others. Yet, it’s really their job to foster their own change. They have to grind it out for themselves.

My lesson from childhood is this: I can’t forgive my Dad’s cruel acts upon me, my Sister and my Mom. I can forgive my Dad for being human, for being afraid not knowing what to do. I believe he experienced even worse from his Dad.

We can have compassion for the jerks, who commit heinous acts. Their actions do have dire consequences. It’s up to them to make amends, to commit to becoming the greater person. That’s their fucking job. Not mine. Again, just saying.

END_OF_DOCUMENT_TOKEN_TO_BE_REPLACED

Facebook16Tweet1Pin1Email4Shares22
wpDiscuz
Share this ArticleLike this article? Email it to a friend!
Email sent!