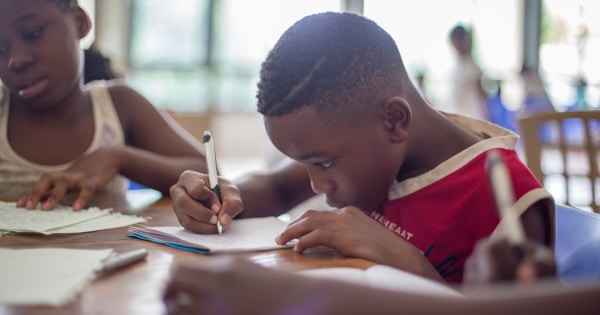 During the most recent Democrat debate, Former Vice President Joe Biden was asked, “What responsibility do you think that Americans need to take to repair the legacy of slavery in our country?”

Biden started out by talking about his background opposing redlining and unfair banking practices before moving on to education. After discussing increasing funding for Title I schools, he then started discussing expanding opportunity for children starting at three (“school, not daycare”).

Up until this point, his comments on education weren’t terrible. As scholars like H. Richard Milner, IV, and Ibram X. Kendi have discussed, the major problem with education equity is opportunity, not ability. It is difficult to learn in schools with low-quality facilities, from less qualified teachers who don’t understand students’ cultural contexts or their own unconscious racial biases.

While more affluent schools are finding it somewhat more difficult to find teachers, lower pay and more stressful conditions have caused poorer districts (both in the cities and in rural settings) to rely on long-term substitutes for chronically unfilled positions. And many students of color, particularly black and brown students, may spend their entire education without a teacher of their skin color, despite research that shows that having even one black teacher can dramatically change outcomes for black students.

To achieve equity, due to the existing imbalance, low-income schools would need more total funding per student, not merely the same. But as it is, Federal and state overfunding of Title I schools do not even balance out the local underfunding.

I’m unconvinced that starting pre-school at three will be productive, especially if that education is the sort of structured factory education we currently have. I would prefer a more unstructured, play-based, and even unschooled approach prior to second grade, if not longer. However, I appreciate the notion that one route to equity is making sure lower-income children have greater access to education at younger ages.

And then, Biden crashed his answer. He reiterated a common White Savior narrative that what poor families need is social workers to come in to tell them how to parent, since “they don’t know quite what to do.” He wrapped up with the currently questioned theory that poor children struggle in education because they’ve heard fewer words as infants.

When Biden refers to “poor” children, it’s crucial to remember that the question was about the legacy of slavery. Coupled with Biden’s comment last month comparing “poor” children to white children, it seems clear that he’s really talking about black children.

Saturday, I attended a presentation called “Colloquium on Education: State Uprising Against Black School Dismantling” at the Charles H. Wright Museum of African American History. The topic was on the State of Michigan’s persistent attempts to undermine and disempower black-majority districts.

The six panelists represented some of those districts: Inkster, which was shut down entirely. Highland Park, taken over by an emergency manager and then turned over the charter schools. Albion, which was given the choice of closure or merging with Marshall Public Schools. Muskegon Heights and Detroit, disempowered through Emergency Managers while private interests profited.

And the most recent story: Benton Harbor, which has struggled and was targeted for dissolution under the previous (Republican) administration. The election of Democratic Governor Gretchen Whitmer was seen as a potential new day, until she tried to go forward with the dissolution plans regardless.

These districts are not stories of hapless parents who simply don’t know how to raise children correctly. The black experience in this country has never been about hapless, disorganized folks needing the help of White Europeans to do things correctly.

That’s only been the White European version of the story.

Over and over, the story of these districts and others like them was the same: State politicians and corporate interests (like the DeVos family) heaping unfair debts onto the districts, taking away state education funding for non-education purposes like sports arenas, and then blaming the districts for their debt. It’s a decades-long bully’s game of “Why are you hitting yourself?”, while the state’s children suffer.

Black communities don’t need record players so they can teach their children words, Mr. Biden. Black communities need white politicians to stop taking their tax dollars and crushing their schools. They need support towards equity, but they can’t even get equality.

One comparison that can be made is between the districts of Highland Park and Hamtramck.

Highland Park Public Schools was turned over to a state-mandated Emergency Manager, who ordered the public schools to be converted entirely to charter schools.

While Hamtramck Public Schools itself was never under the aegis of an Emergency Manager, the city was, and the district struggled with being in the red several years.

Highland Park is a predominantly black community. Once upon a time, it was an enclave for Ford managers, but as the automobile industry in Detroit collapsed, so did the city’s economic stability.

Hamtramck is a predominantly immigrant community. Outside of Michigan, it is probably best known as a Polish city, but most of the current students are from Yemen or Bangladesh. Black students represent a minority (12.5%) of the population.

Highland Park Public Schools continues to struggle. As Board member Eban Morales reports, the Emergency Manager became the Operations Manager for a school district with a single K-8 school that is being run by a charter company. The charter version of the high school was closed three years into a five-year contract.

Hamtramck Public Schools was given the room and supports to rebuild itself. The district is now in the black; teachers have gotten raises in the last two contracts, and each room has enough Chromebooks for all students.

And why is this pattern repeated over and over across the state?

During the colloquium, the panelists were asked: Why has the state pushed so hard to destroy public schools in black-majority areas? Helen Moore, the take-no-prisoners matriarch of the pushback against these seizures, was quick and simple: Gentrification. Without the schools, the land can be grabbed and used for white people’s needs.

The bigger message: Black lives don’t matter. As one audience member said, the education system in this country, from the very beginning, has always been against the education of black people.

Another story from last week was Felicity Huffman being sentenced to two weeks in prison for bribing a proctor to cheat on a standardized test. Meanwhile, black parents get sent to prison for enrolling their children in districts they’re not legal residents of. If schools were equitable, this wouldn’t even be an issue.

Over and over in Michigan, black-majority districts have been disempowered, defunded, and stripped of property, while other districts that struggle just as much financially are given more support to fix things themselves. The districts represented in the colloquium are from all over the state, not one concentrated area. And while I’m most familiar with the situation in Michigan, I know we’re not alone in this pattern.

The message is clear: To politicians, to the private sector, black lives don’t matter.

What impoverished black communities need is something they have yet to get at any point in 400 years in this country: A fair shake. Respect. True financial support, not table scraps. Social workers that work with parents, not intruders who tell them to just play the radio more.

The broad backlash of Benton Harbor is a ray of light in what has been a gloomy landscape for black-majority school districts in Michigan. As a result, Governor Whitmer changed course and gave the district a temporary reprieve. While the reprieve seems small compared to what truly needs to happen to bring the district out of the red, at least the train of destruction has been slowed.

When Whitmer reinforced former Governor Rick Snyder’s position that students have no guarantee of literacy under the State Constitution, Attorney General Dana Nessel disagreed, and supports children over politics.

I’ll close with this message of hope from the students of Benton Harbor High School: “Get up, and put your hands in the air. … All we need is dedication with that education” (Mission Music featuring De’Asha Spencer Kyle, 2Tru, Cam G, and Queenn Barzz).
—

—
Photo by Santi Vedrí on Unsplash

I’m listening. Please write more about education. Our public schools are the foundation of our democracy, right? (As for politics, I hope we can get some younger people in office.) Thank you–

END_OF_DOCUMENT_TOKEN_TO_BE_REPLACED

Facebook27Tweet1Pin1EmailShares29
wpDiscuz
Share this ArticleLike this article? Email it to a friend!
Email sent!