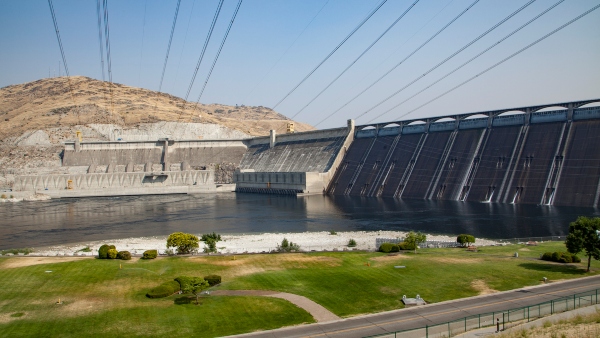 Salmon used to swim all the way up the Columbia River from the Pacific Ocean near Astoria, Oregon to the Canadian Rocky Mountains at the river’s headwaters in Canal Flats, British Columbia. It was an astounding journey of 2,000 km upstream that cut through a landscape of lush forest, dry desert and high peaks.

But since the construction of the Grand Coulee Dam 1942 (which the Canadian federal government consented to), salmon have been blocked from their ancestral spawning grounds in the upper half of the watershed. Their absence has deprived upper Columbia ecosystems of valuable nutrients that salmon bring from the ocean and has caused hardship to Indigenous peoples, who historically relied on this resource.

Now, with the renegotiation of the Columbia River Treaty (CRT) underway, we have a promising political opportunity to bring the salmon back home to the upper Columbia through a collaborative international restoration program.

Federal Treaty Negotiators appointed by both Canada and the U.S. have been in negotiation since May. However, hopes for salmon restoration (and ecosystems more generally) took a dive when both countries chose to exclude Indigenous nations from the process.

Indigenous voices have been the strongest champions for salmon in the lead up to the negotiation. They must be at the table — or we may lose this once-in-a-generation opportunity.

In a recently published study, my colleague and I investigate the factors that may matter most for negotiating salmon restoration as part of the new CRT agreement. We analyzed previous and similar treaties, as well as other fish passage projects and trends in global water governance and found that, in treaty negotiations, parties will often cede rights in one domain to gain advantage in another.

As the upstream party, Canada has a substantial geographical advantage because flood control, hydropower, ecosystem health, water supply, recreation and navigation in the U.S. all depend in-part on managed water flows from Canadian storage dams.

However, as the downstream party, the U.S. has an advantage on the issue of salmon restoration because the essential first step in a restoration program would be to get salmon over American dams, which are the first barriers to their passage.

So, for example, the U.S. could choose to “link” its support for salmon restoration to reduced payments for Canadian water management services. In this scenario, it is unclear if Canada would be willing to prioritize restoring salmon ahead of maximizing treaty revenues.

Our study flags the risk that valuable initiatives to restore the health of Columbia River ecosystems, like salmon restoration, could be sacrificed in closed sessions for shortsighted and inequitably distributed monetary gains. This is why it is critical to have strong advocates in the negotiating room that can guard against this possibility.

The CRT renegotiation is not just an opportunity for the U.S. and Canada to pursue salmon restoration. More broadly, it is an opportunity to break with a long history on the Columbia River where ecosystems and rural people, especially Indigenous people, have been systematically marginalized for the sake of generating far away profits.

The original CRT agreement, which came two decades after the Grand Coulee Dam, flooded four of Canada’s agriculturally and ecologically rich valleys and created a system in which water flows are managed solely for downstream flood control and hydropower generation. And it did so with almost no local input or direct local benefits.

Our governments have assured us that things are going to be different this time. But their choice to exclude Indigenous nations from the negotiation suggests otherwise.

This decision is inconsistent with the spirit of the United Nations Declaration on the Rights of Indigenous Peoples, which Canada and the U.S. have endorsed, and is part of a worrying trend, reflected in the recent Supreme Court decision deeming the Canadian federal government need not consult Indigenous peoples when drafting laws.

It also stands in opposition to Canada’s commitment to true and meaningful reconciliation with Indigenous peoples.

Indigenous leaders have been far-and-away the most effective champions for the health of the Columbia River’s life-giving ecosystems — which benefit all residents of the Basin on both sides of the border. To ensure that the new CRT prioritizes the environment in a meaningful way, our best hope is to elevate Indigenous voices.

They must be at the table. Their rights and our future demand it.