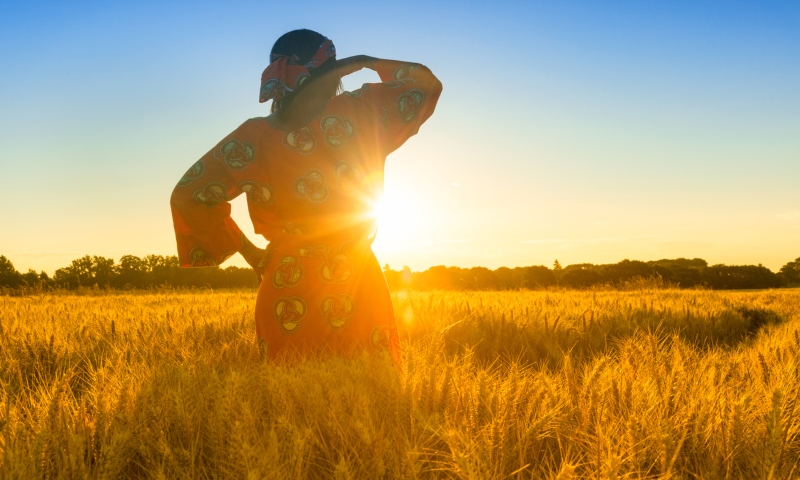 Already cultivated in the arid, sandy soils that characterize much of the region, fonio (Digitaria exilis) is a bit of a miracle grain. It’s an excellent source of protein, rich in sulfur-containing amino acids as well as micronutrients like iron and zinc. Its low glycemic index also makes it ideal for people with gluten intolerance or diabetes.

Fonio may be Africa’s oldest cultivated cereal crop, with an ancient lineage going back more than 5,000 years. Archeologists have even found it buried in tombs in the Egyptian pyramids. Because it matures quickly – in some cases after just six to eight weeks – rural communities have long counted on fonio to bridge the lean season between harvests as food supplies dwindle.

Now, a research project carried out by Cornell’s Climate-Resilient Farming Systems (CRFS) program and 3-A Sahel in Mali has found that farmers can almost double their yields of fonio by adapting principles from CRFS’s System of Rice Intensification (SRI) methodology.

Originally developed in Madagascar in the 1980s, SRI practices emphasize the cultivation of a stronger, more productive plant, and to achieve that, encourage farmers to plant seedlings at an early stage, give them more space to establish root systems, improve soil conditions with organic matter, and apply a minimum of water instead of flooding. Weeds are controlled and incorporated into the soil by using a simple push-weeder. Increasing yields by anywhere from 20 to 200 percent, SRI principles have already been applied to crops as diverse as wheat, finger millet and sugarcane.

What’s more, the program’s partnership with Yolélé Foods – a hip company based in Brooklyn, New York that brings West African smallholder ingredients to the American market – has led to a major advance in processing the hard-to-mill seed, opening up markets both local and global.

“The first plot was the control plot,” she explains, “planted in the traditional way farmers grow fonio.” After light tilling, the fonio seeds were broadcast, or scattered by hand, over the land and, as per custom, given no organic fertilizer. In the second plot, the same planting method was used, but a light dose of nutrients from cattle manure was added. In the third plot, SRI techniques were employed, including line seeding with a special rake to make shallow furrows, spaced planting, and fertilizing with small amounts of cattle manure. Weeding was done with a mechanical push-weeder instead of by hand.

The results after two years of study were striking. While yields in the second type of plot were higher than in the control plot, those in the third plot were almost double. Significantly less seed was needed (12 kilograms per hectare compared to 20) and plants were taller, stronger and had more tillers, or shoots, sprouting off from the main stem to produce more seeds.

“The farmers had not used manure with fonio before,” says Styger, “but they noticed that it improved soil moisture, and that the little furrows that appeared when using the push-weeder allowed for water to collect and infiltrate the soil after a rain.”

For Styger, those outcomes are a clear indication that agronomists should focus more on so-called minor crops, like fonio, as a tool in the development of future sustainable agriculture strategies. “It’s important to look at what people have been doing for thousands of years,” she says.

As global weather patterns and higher temperatures heighten food insecurity throughout Africa, smallholder and subsistence farmers are more vulnerable than ever. “With climate change, you never know what will happen,” she points out. “Will there be a drought at the beginning of the season? In the middle? Will we have floods? So the more [crop] diversity, the better.”

In the cosmogony of the Dogon people, the universe was born from a fonio seed. Yet, while fonio is a popular food item with great cultural significance, increasing its production in and of itself doesn’t necessarily offer a clear path to better and more secure food supplies for African consumers. A recent study of fonio value chains in Mali headed by Charlie Mbosso of World Agroforestry (ICRAF) found substantial obstacles to its cultivation and trade.

“Processing constraints are definitely an issue,” says Gennifer Meldrum, a consultant with Bioversity International and a co-author of the paper “Fonio and Bambara Groundnut Value Chains in Mali.”

“The lack of a reliable market stood out as a limitation that demotivated farmers to produce fonio and Bambara groundnut commercially and traders to deal with these crops,” the paper states. High prices were also seen as a barrier, while “the quality of the processed products, which can often contain sand, reduced their desirability.” And because fonio is usually an ingredient at ceremonial or special occasions, demand for it tends to be concentrated in certain times of the year.

According to Philip Teverow, co-founder and CEO of Yolélé Foods, while farmers in West Africa produce about 700,000 tons of fonio annually, milling the tiny circular grain is a challenge, wasting up to 40 percent of the harvest and failing to meet international quality standards.

That’s why the company has invested in developing new milling technology, he says, that will come onstream in early 2022. “We are building it with joint venture partners in Mali, an industrial processor that will process not only the crops they are currently working with but fonio, millet, and sorghum as well.

“We look at this technical solution as offering an opportunity to meet market demand not only in volume but also quality,” he says, “reducing post-harvest loss, reducing the prices, and increasing the availability of fonio in West Africa. And if we increase productivity, without dedicating any more land, we can grow more fonio.”

Meanwhile, Yolélé Foods remains determined to bring fonio to a wider audience. Its products, including an upcoming fonio chip snack, is now distributed across the United States in Whole Foods and 500 other stores, he says.

Processing fonio more efficiently is “extremely important,” Styger agrees. “We can talk about improving production, but if there is no way of processing and distributing it, and get the market better established, how will the products flow? We need to make it real for our famers, not just do an experiment.”