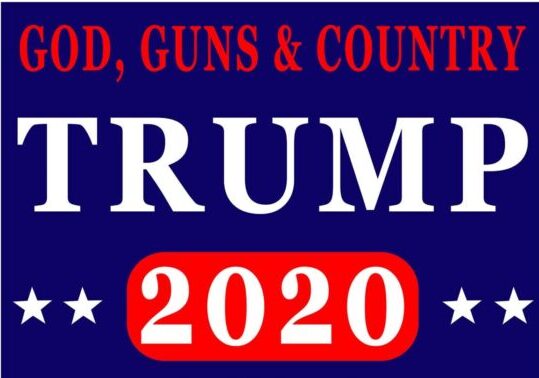 “Let’s take the normal route.” Eventually it sticks. Sometimes we walk it, sometimes we run it. We’re not the only ones. Seniors actually drive to our neighborhood to walk the loop. People from the Y, located a half mile away, come here to run. It’s a good place to put up a yard sign. People see it.

I live in Trump-country. In 2016, two-thirds of my county voted for Trump. But because I live close to town, things skew a little left. Judging by the yard signs I see this year, I’d say allegiances approach fifty-fifty. We don’t have a Biden sign. In fact, I’ve never had a political sign in my yard with the exception of when a family friend ran for county commissioner.

In 1992, I put a Clinton bumper sticker on my car. A friend asked me to create a spreadsheet to help track the effectiveness of Clinton’s political advertising. In exchange, I received a sticker. A couple of nights after the election, my girlfriend, appalled by my support of such a conservative candidate, grabbed the edge of the sticker and shouted “Can. we. please. take. this. off. now?” as she struggled to rip the sticker from the bumper.

Instead of a political sign, we have a Black Lives Matter flag. It’s a modest thing, twelve by eighteen inches, black with white lettering, and a fist. I nailed it to a pillar on our front porch. It really pops. I feel it says the same thing as a Biden sign, and so much more. Unlike my boss who routinely has her Biden sign vandalized, no one has touched our BLM flag.

The sign I saw on the normal route is a Trump sign. The top border reads “GOD, GUNS, COUNTRY.” Susan and I don’t talk much as we run or walk. We use it as meditative time to veg-out or troubleshoot or problem solve. Every now and then, one of us will bring up what’s on our mind, but usually, we just keep our mouths shut and contemplate. I didn’t mention the sign when I saw it, but I sank deep into thought.

When I see Trump signs, especially over-large Trump signs, or yards with multiple signs, I realize how proud these people are to support Trump. And then I wonder what makes them proud. I abhor Trump’s policies, especially his stance on immigration, his denial of climate change, and his desire to lower taxes on the rich while cutting services to the poor. But I understand that an open society must include room for people with differing views. What I can’t get past is mocking and mimicking a disabled reporter, bragging about sexual assault, caging kids like stray dogs, and the on-going middle-school name-calling that fills his Twitter feed.

The family with the God, Guns, Country sign have three Trump signs in their yard. Clearly, they’re proud of their affiliation with Trump. But here’s an interesting thing. They are people of color. I’ve never stopped running to talk with them, so I know nothing about their background.

Is it racist to assume that a non-white person would hate Trump? When I stop and think about it, it seems a little racist to me. But still, these people hail, in some recent generation, from what Trump refers to as a shithole country. Maybe this family likes Trump, but I can’t believe Trump likes them.

When I saw the sign, I thought: Yes, if God, Guns and Country are your chief concerns, you certainly should vote for Trump, but then I thought again. I’m sick of racist, right-wingers like Trump claiming patriotism. At a recent Black Lives Matter rally, Susan held a sign proclaiming that Confederate flags are racist. A woman and her shirtless husband (carrying an assault rifle slung over his shoulder) called Susan un-American. I’m sorry, I suck at quick comebacks. A few minutes later I realized that the Confederate Army was actually at war with America. The Confederate flag is, by its very nature, un-American. It would have felt great to zing that back at them.

When I think about our Country, I think of the cities, the mountains, the deserts, the lakes and streams. I think about the environment, the people, democracy, civic engagement and social justice. These are things I love about America. Things I’ll fight to defend.

I never think about the flag. I could care less about the flag. I know it’s popular for people to wrap themselves in the flag and give the finger to everyone who isn’t white and Christian. To call themselves ‘Americans’ because they revere the patriarchal society that existed at the founding of our country.

As an agnostic, I don’t have much right to claim God as my own. And Guns? You can keep them as long as you keep them locked up in your home.

But Country? That one belongs to me.