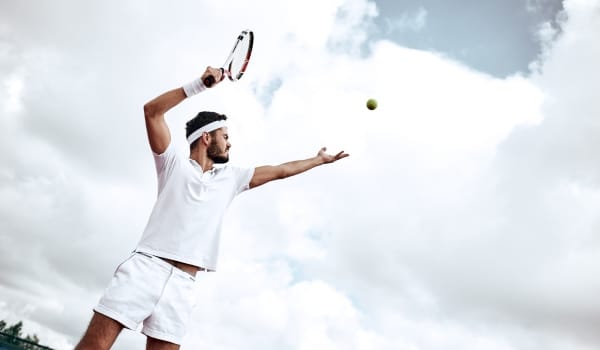 Clearly, Roger Federer is the GOAT of Men’s Tennis. Roger is cognizant that he’s nearer the twilight of his career rather than its inception. Seemingly, the GOAT conversation speaks to mortality and legacy rather than individual achievement.

After the Championship Trophy presentation, the interviewer asked Roger if losing “must be hard?” Roger humbly replied, “I’ll try to forget [laugh].”

He graciously acknowledged Novak: “Novak was great. Congratulations, man. That was crazy…” They battled for 5 sets, for 5 grueling hours.

When asked whether he inspired other 37-year-olds out there, Roger offered: “I hope I give other people a chance to believe that at 37, it isn’t over yet.”

So now with Wimbledon complete, Roger can go back to being a Dad? Yes. Of his wife and children, he said, “I love them.” Amen.

2019 Wimbledon Champion Novak said, “…Roger said he hopes it gives other people hope they can do this at 37. I’m one of them. It’s extra special with my son in the crowd, and my family too. My wife and daughter are here in London but watching at home, and I give them a big, big hug.”

Sure, Novak will do his best to surpass Roger’s 20 Grand Slam titles for his chance at becoming the next GOAT. Novak loves Tennis. Like Roger, he loves what he does.

Novak also said that becoming the GOAT is only meaningful and possible, because of the love and support of his parents and family. Both Novak and Roger get: The Art in the Bigger Picture. Respect. Family. Legacy. Love.

We all get older. We all shall eventually ride off into our respective sunsets. I believe that we really get old when we stop doing what we love to do. We do what we love, accepting the inevitable graceful decline. We all must define our own graceful exits, as well.

Roger and Novak inspire me as they keep reinventing their greater than versions. 6-time Super Bowl Champion 41-year-old Tom Brady inspires: He continuously improves his game as he starts training camp for his 7th Super Bowl run. That love is what makes me get up early every Sunday morning to practice Aikido. I’ve been doing so, for 30 years.

Sure, the body is getting older, in decline, and it aches after a hard practice. Yet, like Tom, Roger, and Novak, I believe we keep grinding it out, keep enduring because we so love what we do.

Tom, Roger, and Novak are the GOATs of what they love to do. I’m not at all the GOAT of anything. Yet, witnessing these good men reinventing their greater than selves, inspires me to do the same.

Much like Sensei Dan what did for 25 years, and what Sensei Bobby inspires me to grind it out to become my greater self.

Sensei would always say, “Just train.” Yeah, I just train, because I love. That shall be my graceful exit. Just saying.

Hey Lisa – We couldn’t get a pic of Novak or Roger? I kid. The post look great!!

Facebook18Tweet2Pin1Email1Shares22
wpDiscuz
Share this ArticleLike this article? Email it to a friend!
Email sent!