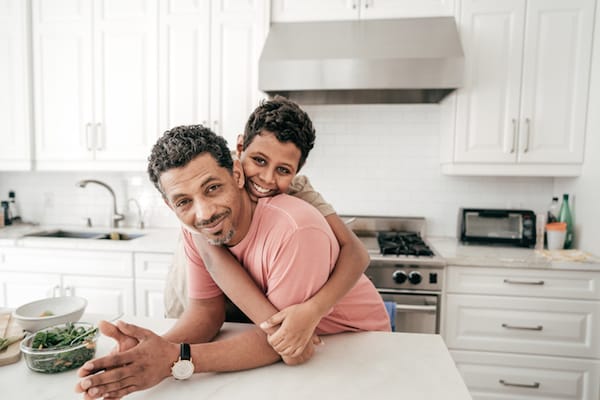 Where there is a strong father-child attachment in the early period, research shows a link with the child’s later social skills, better behaviour and stronger cognitive skills (such as language and IQ). Fathers influence their children’s futures.

Interestingly, these links between strong father-child attachment and later child development are weaker in traditional families where the mother is a primary carer. This suggests that the difference an involved father makes is greater in non-traditional family structures.

THE INFLUENCE OF A FATHER ON HIS CHILD’S IQ

Supportive parenting of two year olds by fathers (and also by mothers) predicts later academic achievement. Anne Martin and her team found that supportive mothers and fathers at the age of 2 both appeared to promote better arithmetic and language scores when their children were aged 5. Other studies find similar links between the amount of parental conversation with the child and the degree to which fathers read books to their children.

Eirini Flouri and Ann Buchanan found that British children with more involved fathers had higher IQs at 7 years of age. Other researchers have found similar associations at 11 years and 16 years of age.

Some researchers have worked hard to distinguish fathers’ influences on educational performance from the effects of other wider family and community influences. The links remain: fathers who are supportive appear to promote language and cognitive development.

THE INFLUENCE OF A FATHER ON HIS CHILD’S SOCIAL SKILLS

Ross Parke and his colleagues found that a physically playful and affectionate father-son relationship predicts the son’s later popularity with his peers. Other researchers found that fathers who are more sensitive to their 5-year-olds’ emotional states have more socially competent children 3 years later.

Researchers have looked to see if fathers and mothers have different influences on the social development of children. It is very difficult, however, to separate these from the many different roles that mothers and fathers play in different families. What researchers did find, however, is that children who report secure attachments to both their parents were more likely to report positive friendships.

THE INFLUENCE OF THE MOTHER-FATHER RELATIONSHIP ON CHILDREN

This is true the other way round – the father and the mother-father relationship both influence the mother-child relationship, but the influence is less. Perhaps this is because maternal behaviour is framed by clearer conventions and role definitions, whilst the father’s roles and behaviour are more influenced by what the mother believes.

The conclusion of all this research is clear: a father who wants to be close to his children and influence their future for the good should invest in the relationships with both the children and their mothers.

MICHAEL E. LAMB
Professor of Psychology at the University of Cambridge, UK