Get Daily Email
Join/Login CLOSE
Home / Featured Content / How to Kvell––or, Boast About Your Kids With Love So It’s Not Obnoxious 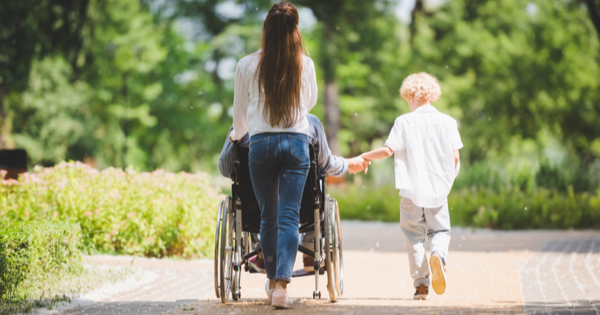 My son Ben was only five the day I said goodbye to him, went off for a half-hour bike ride, and basically came home four months later a completely different father from the one he had known, paralyzed from the chest down. The trips we had talked about taking as a family, the kinds of games and activities Ben saw his friends doing with their fathers, and even my ability to pick him up and hold him—they were all gone in a minute. The loss of the normal life we had enjoyed together had to have had a traumatic effect on a five-year-old, but it took quite a while for me to recognize his pain and confusion. I was too embroiled in my own fears and losses.

Ben flew with Dora, my wife, to Colorado, where they stayed in a rental apartment and visited me at Craig Rehabilitation Hospital every day. The facility was filled with all kinds of weird-looking rehab machines, and there were lots of kids suffering from various crippling conditions—kids who had been injured diving into shallow water, surfing, or falling off a motorcycle or a ladder. Teenage boys and young men most often sustain spinal cord injuries, since they are the ones who are most active and heedless of danger. I was the exception there, together with Willie Shoemaker, the famous jockey, who lay in a hospital bed across the hall from me watching horse races on satellite TV.

The year before my accident, we had enrolled Ben in Solomon Schechter Hebrew Day School in Newton, thinking that he deserved a very different early school experience from the one I had known. I am not a particularly religious or observant Jew, nor is Dora, but we strongly identify with Jewish values and culture and wanted Ben to be exposed to Jewish teaching in a way that we could not provide at home. It was a good decision; today he has a strong moral compass that points him to a life of kindness and compassion toward all people.

At Schechter, everyone was Jewish and no one drove a Ford station wagon with wood trim or belonged to a yacht club (except me) or had a flag decal stuck to the rear left window (I had that too, oops). The teachers were loving, caring Jewish mothers, the kind of women you would expect to say, “Darling, have a little more kreplach.” I especially loved the school musical productions they put on. In Ben’s first year they did West Side Story, actually sung in Hebrew, and the following year, Annie, also sung in Hebrew. What a difference from my preppy elementary school fifty years earlier! I saw one kid wearing a T-shirt that read, on the front, in big letters: Undefeated—25 Years. Printed across the back was this: Solomon Schechter Football.

From Solomon Schechter, Ben went on to Beaver Country Day School in Brookline, where he met one of those rare teachers, Larry Murphy, who chaired the Science Department and immediately noticed Ben’s passion for the subject. As it happened, Beaver was a satellite for the Boston University City Lab. Beaver had a modern biotech lab that was to be used to introduce biotechnology to students from other schools that lacked such equipment. With Ben’s sophisticated computer and website skills, he worked with Larry to set up a summer program for advanced high school students that offered hands-on learning in the lab along with a trip to the NIH’s Bethesda campus to meet with researchers and see all the specialized equipment. And with that specialized training, there was the possibility of placement in a lab at Harvard or Tufts Medical schools.

He also taught himself computer programming and computer science, since Beaver didn’t offer it. If you walked into your kid’s room any morning after he left, you’d expect to find a pair of dirty socks and maybe Harry Potter or Charlie and the Chocolate Factory on the nightstand. But if you walked into Ben’s room, you would find the socks, but on the floor at the head of the bed, instead of Harry Potter, you would see C++, Java, Pascal, or Pearl, all three-inch thick computer language textbooks.

So, am I kvelling over my son Ben? Yup.

Kvelling is a Yiddish idiom, and as usual with Yiddish, there isn’t a simple translation. To explain it requires a story.

Example: You want to know the meaning of, say, schnorrer?

Somebody says to you, “You want two tickets to opening day at Fenway Park?”

And you answer: “Do you have four?” That’s a schnorrer. So, here’s the story on kvelling. “So, how’s everything with you?” your friend innocently asks. “Oh, I just can’t stop kvelling over my son,” you answer. “So, tell me.” And now you have sucked the person in and now have a green light to tell her the whole thing. She asked, didn’t she?

“You know how he loves computers and how he taught himself to program and got himself a summer job at Harvard Medical School, and how Beaver is letting him take a semester off, with credits no less, to work in a lab at Harvard on a completely new program called Systems Biology, which uses an entirely new computer language called ‘Little b?’ Well, guess what? Their work was published in a peer-reviewed journal, and Ben is listed as a co-author! He achieved the highest score in his AP Biology, Computer Science, and Math exams. And he’s been admitted to Columbia.” (All true!)

So, kvelling is pretty much just boasting, only done with so much love, it doesn’t seem obnoxious.

Fatherhood has opened my eyes to Judaism in a new way, and pushed me to want to share what I have learned with my son­––and now that he is an adult and a father himself, with my grandchildren. I now see Judaism as a spiritual and intellectual legacy, one that has profoundly influenced Western civilization by contributing a set of moral principles and a blueprint for a just society. The principles contained in the Torah (the five books of Moses) and the Talmud (the laws and their interpretation) actually comprise the principles upon which every moral democratic society is built.

Even our holy days (holidays) are celebrated to remind us of the importance of ethical behavior and social justice. For example, as each new year begins with Rosh Hashanah (Head of the Year) and Yom Kippur (Day of Atonement), we are asked to examine our behavior to search out where we have treated others unfairly or unkindly during the previous year, and to seek their forgiveness and make amends. We cannot privately confess to a rabbi and say a prayer to redeem ourselves. God cannot forgive us for injustices we have done to our fellow man; those we have harmed must forgive us. In the spring, at Passover, the readings around the seder table remind us of the immorality and cruelty of slavery and of oppression and tyranny of all kinds. This is brought home by the fact that our ancestors were slaves in Egypt. As we retell the story each year, we become part of the suffering of oppressed people everywhere and responsible for the redemption of all people everywhere.

Judaism more than a religion, it is a philosophy of life, and a mitzvah (required good deed) to share that philosophy of just behavior and good works with your children and your grandchildren.

Matthew, Mark, Luke, John and Me

Arthur D. Ullian is the author of "Matthew, Mark, Luke, John...and Me: Growing Up Jewish in a Christian World" (Bauhan Publishing). He is also a founding partner of the Boston Land Company, a real estate development firm. In 1991, he became paralyzed following a bicycling accident, and has since used his business and entrepreneurial skills to advocate for increased federal funding of biomedical research. His contributions in this area include testimony at numerous congressional hearings and organizing research-related educational forums and roundtables on Capitol Hill. Ullian served as president of the National Council on Spinal Cord Injury, chairman of the Task Force on Science, Healthcare & the Economy, a member of the Advisory Council to the director of the National Institutes of Health (NIH), and the Harvard University Embryonic Stem Cell Research Oversight Committee. He has received numerous awards and honors for his service, and has co-authored articles in several national and international peer-reviewed journals. He is married to Dora with one son Ben, his wife Anne-Marie, and two grandchildren, Otis and Seraphina.