Get Daily Email
Join/Login CLOSE
Home / Featured Content / Instead of Going on Another Date, I’m Just Going to Find a Woman Who Doesn’t Want to Have Sex and Buy Her Dinner* 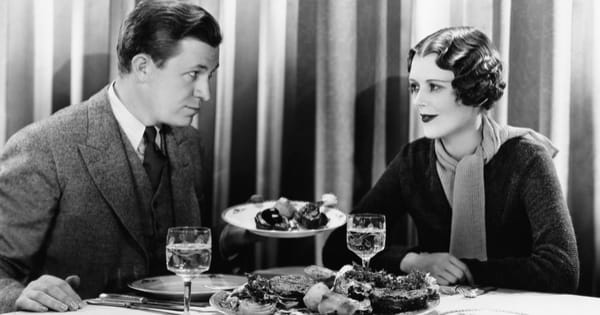 According to The Atlantic, we are amidst a sex recession; the flows of the sexual revolution are ebbing; intercourse as recreation is receding from our crazybusy lives.

Post-postmodern civilization and its discontents. Consumer-based surveillance capitalism and its hedonic treadmills. Technology and its permanent sensory overload — everyone is now somewhere on the ADHD spectrum.

I see five main reasons people are having less sex:

1) Too much confusing foreplay due to technology.

After a hard day of wielding iPhones like lightsabers, people are all foreplayed out. People are having less sex because most interactions on our mobile devices are subconscious exercises in power. ACCEPT-ed or DECLINE-ed. LOVED or UNLOVED. Ten DECLINEs in a row and your brain tells you that you are UNLOVABLE.

See, everything is sex, Except sex, which is power

You know power is just sex, You screw me and I’ll screw you too

Everything is sex, Except sex, which is power

You know power is just sex, Now ask yourself who’s screwing you

Mobile phones empower everyone including the impotent. But it is all foreplay. And after a day of foreplay people are tired of all of the accumulated rejections, abandonments, denials and betrayals.

The impotent feel powerful when they DECLINE calls, when they GHOST you. They showed you who is in control, who is in charge! Each DECLINE, each swipe releases endorphins like a tiny orgasm. Now every imposter suddenly has the ability to instantly FUCK YOU and inform you that his or her time on planet earth is more important than yours. DECLINE! (Tiny orgasm!)

2) Women are tired of being sexually harassed and sexually assaulted

I don’t live in one of those African or Eastern European countries where marauding militias rampage through a town raping and pillaging everything in sight. However, sexual harassment and sexual assault statistics in America are staggering (AND I believe that most still go unreported). Women live in constant fear. They are objectified by men in the media and in real life. They perpetually feel unsafe.

In our society we are not taught how to interact compassionately with members of the opposite sex. We are taught to use them as if they were commodities that can be divorced and deleted as soon as they stop providing.

Men are even sometimes taught that women are shrews that need to be tamed. Thankfully, this subconscious narrative is dying as I discuss in the chapter on “The Myth of Romance” of my book. I write about the possibility that all great passions in literature as well as real life (cf. Alain de Botton’s “Romanticism” video) are hierarchal, illicit and ultimately dysfunctional.

Is titillation possible without even a hint of exploitation?

On average, men are physically larger than women and men are more often in positions of power; females, until 30–40 years ago, were mostly relegated to sexy servile service positions in restaurants, bars, banks, schools, stores, and on airplanes, while men did the “real” business of investing in stocks, working forklifts, traveling to the moon, earning boatloads of money playing professional sports, directing movies, producing records, etc. This is changing and more women are becoming CEOs and running businesses; however, what are the ramifications of sexual business equality in our bedrooms?

As I say in my workshops, if we set up two 35 year-old University of California graduates on a blind first date, both earned exactly $100,000 per year and were democrats who enjoy yoga and hiking, although they appear to be the perfect match on paper, that at least one of them would return from their first (and last) date saying, “S/he’s awesome! But there was just no chemistry.”

This elusive “chemistry” that we all seek and crave… could it depend on hierarchy, a power difference, some mysterious “other” like disparate social classes (cf. “Pretty Woman”) that must be overcome? Why do basketball players and rock stars have unlimited access to sex? What are women thinking when they line up backstage or in hotel lobbies for alpha-male basketball players or musicians?

The #MeToo movement is the best thing to happen to America since the Civil Rights Movement. We need transparency, we need authenticity. We need to eradicate exploitation. We need to make the workplace safe for everyone.

Yet the #MeToo movement has made cowards of some men — and understandably so. Any accusation has the potential to destroy both a social and a professional life forever. A sexual assault accusation can make a man indefinitely unemployable. And even in today’s no-place-to-hide world, it often boils down to she said, he said.

Thus, because men do not wish to risk going to jail, being thrown out of school, being shunned for life, they have become gun-shy.

Recall the line from City Slickers, “Women need a reason to have sex. Men just need a place.” Assuming that that sentence is accurate, do we need laws to govern how people interact to make women feel safe, to eliminate sexual harassment and people (mostly men) using positions of power to take advantage of people with less power?

For the workplace, I believe the answer is a resounding ‘YES’ although it does not seem to be occurring. Healthcare professionals such as psychotherapists cannot legally interact socially with our patients for two years once we see them professionally. It’s actually a crime.

Why don’t we have laws like this in other industries? Would there be as many abuses of power, men coercing women into sex, if we had laws against fraternization for co-workers?

Listen, you’re going to have to talk to most sex partners IRL. And by talk… I mean listen. Your sex partner is going to have emotions. His or her body is going to smell funky at certain times. There might be excess flesh or a blemish somewhere. Wrinkles. Freckles. Some misplaced hair or lack thereof. A mangled toenail. An asymmetrical nostril. An ear. S/he might not act out your favorite fantasy on every occasion.

You might actually have to care about a fellow human being.

Well, all of those sticking points vanish into the ethers thanks to pornography! Voila! A visual partner who will do everything your eyes could desire! There’s little downside to a private wank; no drama, no hassle, no complaints. A quick rub and you’re right as rain. The greatest invention since… uhhhhh… the myth of romantic love.

4) Dating and mating rituals fall somewhere between obsolete and dead.

Because rendezvouses have become amorphous and unstructured and there are no agreed upon customs anymore, dating is officially dead. As Nietzsche wrote, “the greatest labour of human beings hitherto has been to agree with one another regarding a number of things, and to impose upon themselves a law of agreement — indifferent whether these things are true or false.”

Since the gender roles are now fluid, there is no clearly delineated way to know who holds the door open, who pays the check, who decides what activity the couple shall partake in or not partake in.

However, face-to-face communications about dating and gender roles do not flow as swimmingly as one would imagine. Discussing the most common instruments of power — money and sex — is often quite awkward. And unsexy. In fact, in my workshops I claim that if you analyze most divorces you will find that couples frequently divorce because of disagreements about two fundamental subjects: money and sex.

All of the above is to state that we are living in extremely confusing times where impeccable, compassionate and authentic communications are the only way to navigate through the minefields of what is left of “romance.”

From my male perspective, I would say that the balls are now in your courts, ladies (mostly because men have behaved so terribly for so long).

Thanks to the #MeToo movement many men have been dissuaded from pursuing women lest they are outed as sexual harrassers; courtship has entered uncharted waters we are all going to have to learn to uplevel our communication skills in order to avoid mis-expectations.

How many generations will it take for women to transcend slut-shaming? 90% of females I see on Tinder have “Not here for hook-ups” in their profiles. IT’S A FUCKING HOOK-UP APP! It’s like me going to Whole Foods and saying, “Not here for shopping.”

I haven’t checked but I’m fairly certain that dear few men on Grindr have “Not here for hook-ups” first thing in their profiles.

Women today like to think of themselves as sexually empowered… yet many still appreciate being pursued rather than pursuing… but they don’t want to be stalked or hunted like prey… they may enjoy men being chivalrous and doing knightly things like buying them flowers and presents and drinks and meals as signs that men are providers and protectors… but they do not want men to be macho to the point of rapey (unless the women are total submissives)… and above-all, women still cringe at the thought of their friends or anyone calling them “slut.”

How can we correct this?

It all sounds rather confusing.

And I didn’t even mention STDs!