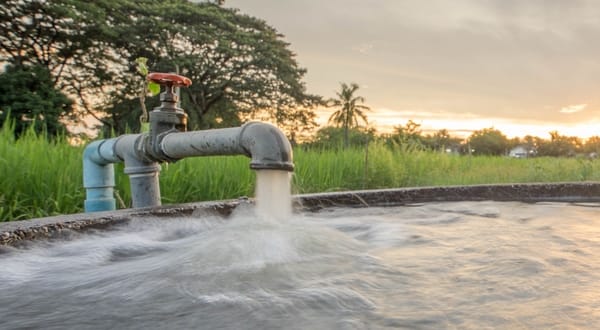 —
Traditionally, communities all over the world have relied on fresh surface water to meet their water needs. Thus, with the advent of urban centers and rapid development, one of the first thrust areas was to control and store surface water resources so that the population of an area can reliably survive on it.

Investment in dams have been occurring all over the world. While the investment today is primarily to produce power, it used to be for supplying irrigation water to agricultural lands around the dam. Channel control and manipulation has also occurred extensively in almost all parts of the world.

But there are problems with relying solely on surface water. It is very difficult to support a large population for a long period of time. There is a question mark on the availability of fresh surface water throughout the year, and it is also susceptible to climatic fluctuations. A single drought or flood can affect the surface water sources adversely.

Thus, many communities have switched to groundwater for their water needs. Groundwater is present throughout the year. Aquifers are usually recharged in the monsoon and fill up sufficiently to survive for a year or even more. There is also a sense of autonomy with groundwater; you can install a tubewell in your backyard and pump water according to your needs instead of relying on the surface water that is surrounded by government regulations. Groundwater is also relatively less polluted than surface water. Groundwater is not affected by climate fluctuations and can help stabilize agricultural populations in times of drought (Shankar, Kulkarni and Krishnan 2011).

But this paradigm shift to groundwater has resulted in over-exploitation (who is surprised?).

Recent studies all over India have shown that people are drawing more and more groundwater. The lack of regulation regarding setting up of tubewells meant that it was very easy for farmers and private home-owners to set up tubewells in their backyards to withdraw groundwater. It is more accessible, a private source of water and did not require large investment of money or time. The most dramatic change in the groundwater scenario in India is that the share of tube wells in irrigated areas rose from a mere 1% in 1960-61 to 40% in 2006-07. By now, tube wells have become the largest single source of irrigation water in India (Shankar, Kulkarni and Krishnan 2011).

THE PROBLEMS THIS IS CAUSING…

Groundwater recharge occurs only after a certain level of precipitation. Below this level, all the water flows as surface run-off. Therefore, there is no guarantee that the rainfall we receive is entering the aquifers below.

Groundwater storage below is not controlled by us. The space available completely depends on the situation below. Most of India (about 65%) have limited groundwater storage capabilities. Adding the fact that groundwater recharge is slow, this causes a major problem for development in the long run.

The unregulated use of tubewells is not helping anyone’s cause. Since tubewell installment is cheap and easy, most people and farmers install high powered tubewells and draw water indiscriminately. Some households may even rely on multiple tubewells.

Drawing groundwater also requires a large amount of energy, and this energy is provided through diesel or petrol run engines. This has increased the carbon footprint of the populations dependent heavily on tubewells.

The recharge of groundwater because of changes in LULC is varied and depends on a case to case basis. You can read more about this here.

If managed properly, groundwater resources can be an excellent source of water to a community for a long time. But the key is management. It is extremely important to take appropriate steps to regulate the groundwater extraction and promote groundwater recharge in communities at the local level for this resource to be used.

The first step to management is to regulate the implementation of tubewells. This will put a check on the amount of groundwater extracted by households and farmers.

It is also important to regulate the changes in land use and land cover. Mindless increase in urban areas, as seen in Bangalore, India, can be extremely detrimental to people in terms of water resources. Agricultural water needs also need to be regulated by governing bodies, and the growth in agricultural land requires careful planning with the joint efforts of farmers and local governing bodies.

solar tube wells_FotorTubewells can be powered with solar panels, as this can significantly reduce the carbon footprint problem.

Constant monitoring of the groundwater situation is extremely important in management. There are various ways in which groundwater resources can be estimated. Using these methods, scientists should conduct regular estimation of groundwater draft, groundwater recharge as well as groundwater storage changes to ensure that we are able to balance the resource effectively.

If this can happen, we can truly weather the problems caused by fluctuating weather and the water scarcity we are facing in India as well as many other nations abroad.

This post was previously published on www.eco-intelligent.com and is republished here with permission from the author.
—
Photo credit: Shutterstock