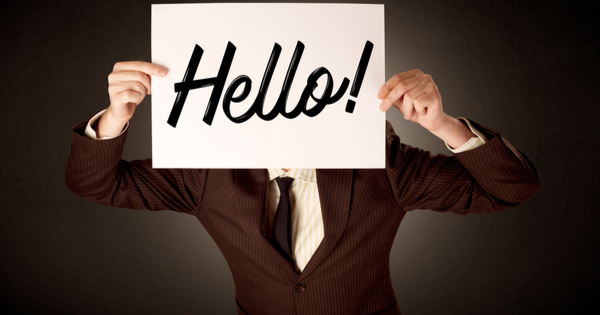 Am I right to think that you can tell a lot about someone, or something about someone, by the way they greet or say goodbye to someone? I mean, imagine if you had a penchant for reciting the famous Shakespeare quote from Romeo and Juliet – “Parting is such sweet sorrow that I shall say goodnight till it be morrow” – whenever a situation arose for a farewell. Right or wrong, people might think you decidedly dramatic, poignantly poetic, emotionally evocative, or just ostensibly odd.

Okay, I proved I can be alliterative, now how about making a point? Which is, we all have signature expressions we say when we’re coming in or out the door, so to speak. We might vary it up now and again, depending on mood and place and whoever we are with at the moment. But in the aggregate, if, say, you had a personal stenographer by your side to jot down your every utterance (dare to dream), you’d see a definite communication pattern emerge in the later reading.

So it was the other day when I met a casual acquaintance while out shopping for groceries, that I greeted him with my standard, “How’s things?” And he shot back with, “I can’t complain.”  And that was that.

It was not an unfriendly or brusque encounter – we were moving in different directions down the condiment aisle, masked and pushing carts. It was not the time or place to stop and chit chat.  We had more or less kept up a normal social exchange for our limited relationship, as well as good social distance.

And that should have been that.

Except I am a writer.  And more than a bit peculiar.  I am fascinated, okay obsessed, with language, and often look for deeper meaning in the shallowest of wells.   So I thought about his greeting – “I can’t complain”- while I finished my shopping and long after it was productive to expend precious cognitive fuel on the matter.  But what’s done is done, and this is what I came up with.

To start, taken literally, his response would surmise that he was “unable” to complain.  Either he had some sort of neurological issue stopping him from sending vocal signals from his brain to his mouth, or he was being stopped from griping by some external force – be it his job, a loved one, the government!  If true, what he was sharing with me wasn’t a passing pleasantry, but rather a plea for intervention, seeking assistance to free up his mind and body so he could whine to his heart’s content.

Because I do have some hold on reality, I knew the above interpretation was highly unlikely – that he did not intend for his greeting to be taken verbatim.  More he was just letting me know his life was going well.  And maybe he was just being humble about his good fortune.  Rather than saying, “I’m doing great!” which, sometimes, when I hear from others, makes me think I’m not doing so great in comparison, he downplayed it

In the end, however, I believe he was hinting that things were not going so well in his life as to be perfect.  I took it that he could complain if he so desired, maybe about many things, but he was choosing not to do so at this time.  Maybe if we had a closer relationship and were not surrounded by shelves of ketchup, relish and salsa, he might have greeted my “How’s things?” with an “I’m hanging in there,” which I always decipher as a four-word cry for help.  But he let me off the hook, and imparted a short greeting an important life lesson – complaining does no one any good.  Or as Confucius taught, “It is better to light one small candle than to curse the darkness.”

But it’s not a terrible thing to listen closely to what others say, even in passing and no matter how mundane.  And it’s certainly important to listen to what comes out of our own mouths, to take stock of what we say, and what we don’t say.   In this way, we can better understand who we are, what we aren’t, and where we most likely will land in the future.  And it also might just keep us happy and honest.  As Shakespeare also wrote, “This above all: to thine own self be true, And it must follow, as the night the day, Thou canst not then be false to any man.”

Until my next column, Take Care, Be Well, and Stay Strong.