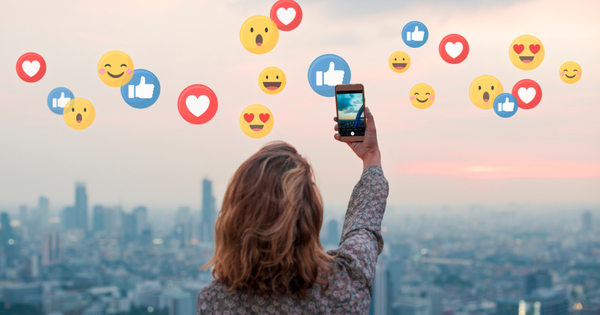 I truly believe, as the saying goes, “That adversity doesn’t build character, as much as it reveals it.”  This adage applies to the individual – how they react to stressful situations, how they hold up, treat others, and learn (or not) from the experience, as well as the collective.

Our society, today, is under siege.  Some might say even at a breaking point.  And for good reason.  The COVID-19 outbreak has brought with it untold loss, pain, sorrow, despair and frustration.  But the virus and its impact have also been the foundation for heroism, endurance, strength, determination and unity.

But while I am all about the positive in this column, looking (and finding) silver linings and seeing the glass half full even when it might be emptying, my goal in this piece is to point out a continuing and growing problem I see in our culture: a reliance on social media to bring us affirmation.

Particularly now, when our computers and phones serve as vital portals to the outside world, there is, understandably, more desire to connect with people… lots of people.  But while nothing feels better than a slew of “likes” and supportive comments after a post, for example, nothing can also hurt more than being ignored, rejected, even bullied.  In the end, there is potential to develop an up-and-down emotional addiction to social media, a condition that threatens balance and overall well being, at a time when balance and overall well being are essential.

All that said, here’s something I wrote before about this issue, citing George Orwell and one of his most creative and controversial works.

In 1984, George Orwell created Oceania, a dystopian society overseen by “Big Brother,” who monitors citizens on “Telescreens” to keep them compliant to the totalitarian agenda.

But in my opinion, in 2020, social media is the (virtual) bully on the block in terms of thought-control, the affirmation-driven elements of Facebook, Twitter, Instagram and others, the “Likes” and “Follows,” for example, posing a rising threat to autonomy and mind independence.

While you might think me an anti-technology crank, it’s true that in the quest for recognition, some online users will create exaggerated and misleading personas, bending or breaking truths to conform to what is popular or currently trending. And don’t we all know people who share the most mundane activities (#chewinggumandlikingit) online? Do they think it valuable to disseminate such information, or are they really working through an existential panic?

No doubt, social media has many benefits, but it also has the potential to damage, such as creating ‘praise junkies,” individuals, as per the Urban Dictionary, who constantly seek/crave praise and attention and highlight everything good they achieve in order to get praise.

As with all addictions, an unhealthy reliance on affirmation can cause psychological damage. Beverly D. Flaxington, in Psychology Today, notes: “…social media users whose self-confidence is lacking can become more anxious or depressed over what others seem to have and they don’t. That nagging feeling of not being able to measure up will only lead to less self-confidence and an erosion of self-worth.”

In sum, in a society steeped in selfies, where conceit and deception is often rewarded with followers, are we not the living embodiment of Winston Smith’s words, the hero of 1984, who concluded this about the proles in Oceania: “Until they become conscious they will never rebel, and until after they have rebelled they cannot become conscious.”

I say it’s time to put down our mobiles and start this process.

A version of this previously published on Democrat and Chronicle

Facebook39Tweet3Pin1EmailShares43
wpDiscuz
0
0
Would love your thoughts, please comment.x
()
x
| Reply
Share this ArticleLike this article? Email it to a friend!
Email sent!