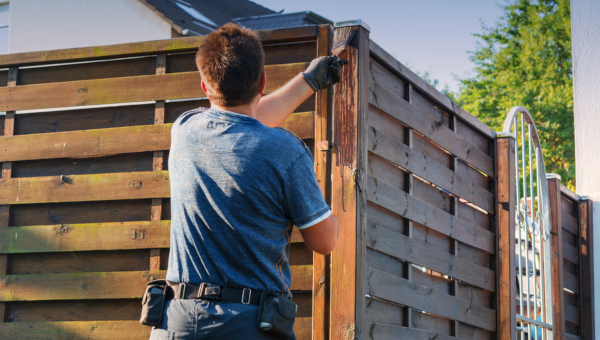 —
When Lydia and I moved into our house, we had the only dwelling on the block. It was a new development, and while there were several structures to our west, behind our home, all else surrounding us was open field. This is not the case anymore; now we are boxed in, and there is no more open space.

When new houses go up, a tacit form of leeching takes place among neighbors; the first home up will put in a fence, and then the next resident takes advantage of this. Not only will the second resident already have one side of his yard fenced in, but he also gets to hook on to the existing fence when putting in his own. This saves the later-arriving people money and materials.

A few months back, one of the few remaining lots in our area was sold, and a house started going up. The builder noticed something odd along the way and informed the future home-owner of their discovery: the family next to the lot had accidentally placed their fence 18” across the property line, and were, therefore, encroaching into the new home’s lot.

This infuriated the new-to-be homeowner, and he immediately contacted his soon-to-be neighbor and cried, “Get your fence off my property!”

The fence owner, shamed, contacted the fence company and explained, “Hey, when you put the fence in, you put it in the wrong place.” The fence company, for reasons that defy all logic, said, “Well, it’s going to cost you $900 for us to move it.”

I shall repeat that: the fence company that put the fence in the wrong place the first time said they were going to charge $900 to correct their mistake.

The owner of the fence was unhappy with this arrangement, and through diligent searching found someone willing to move the fence for $400.

(Why they paid at all and didn’t take the fence company to court is unknown to me.)

The manner in which the fence owner responded, however, makes me smile muchly: they moved the fence 10” inside their own property line.

This move did not go unnoticed by the new homeowner, who quickly contacted the fence owner: “Hey, you put your fence on your own property; I can’t attach to it now, and it’s going to cost me $900 to build a section of fence down the property line.”

This post was previously published on NathanTimmel.com and is republished here with permission from the author.
—