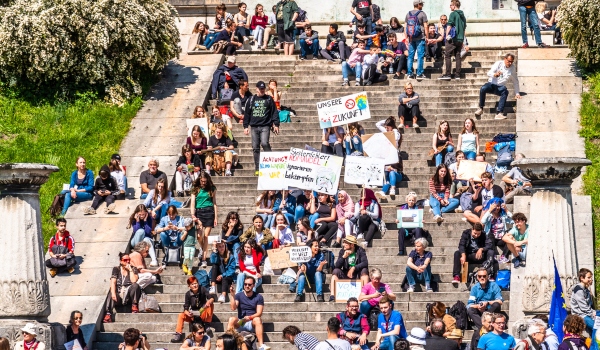 LONDON, 20 September, 2019 − Leading scientists have declared their support for the global climate strike which starts today.

In a statement published by the Earth League, headed Humanity is Tipping the Scales of the World, 20 respected scientists throw their weight into the argument. Among a stellar company, they number Lord Nicholas Stern, Johan Rockström from the Potsdam Institute for Climate Impact Research in Germany, and Hans Joachim Schellnhuber, its founder.

The world is approaching a dual tipping point of social and environmental systems that will arguably determine the future of life-support systems on Earth, they say.

On the one hand, young people across the world are struggling to tip the social scale towards swift and concerted climate action.

“If that tipping towards sustainability does not happen quickly, we risk crossing different kinds of tipping points – those in the Earth System that may threaten the stability of life on our planet.

“Humanity is tipping the scales of our planet’s future”

“Tropical coral reef systems and the Arctic summer ice are at risk already at 1.5°C warming and we now know that there is a likely tipping point for the destabilisation of the Greenland Ice sheet, which may be as low as 2°C.”

Much of the factual material they explain is by now all too well-known; many of their specific warnings, however acutely they present them, echo with leaden but still necessary familiarity. But there is a new note to what they have to tell the world: that time really is running out.

“Humanity may tend to take the benign conditions of the past 10,000 years for granted, but we are already experiencing the highest global mean temperature on Earth since the last Ice Age”, they write.

“If anything, there is a growing understanding that expert assessments, which are usually conservative in the best sense of the word, have contributed to allow decision-makers to underestimate – not overestimate – the risks of climate impacts. Now it is apparent that impacts are happening much sooner and more severely than expected.

“In each report since 2001, the Intergovernmental Panel on Climate Change has corrected its assessments of the so-called ‘reasons for concern’ upwards, i.e., to higher levels of worry.

“The world is following a path which even at a conservative assessment will result in more than 3°C of warming – with definite irreversible tipping points – by the end of this century. Last time we had this level of warming on Earth was 4-5 million years ago.”

The scientists echo the call of the young strikers: “This is not a single-generation issue”, they say. “Humanity is tipping the scales of our planet’s future.”

Serious scientists are usually cautious people, unwilling to stick their necks out and speak out on something about which they are not absolutely certain. But today’s statement is not like that − and it is not the first of its kind.

Three other experts, all renowned in their fields, last April urged support for the school strikers, declaring: “The world’s youth have begun to persistently demonstrate for the protection of the climate and other foundations of human well-being … Their concerns are justified and supported by the best available science. The current measures for protecting the climate and biosphere are deeply inadequate.”

They attracted the support of more than 6,000 of their colleagues. When scientists are prepared to voice their fears as openly as they are now doing, where does that leave the rest of us? − Climate News Network