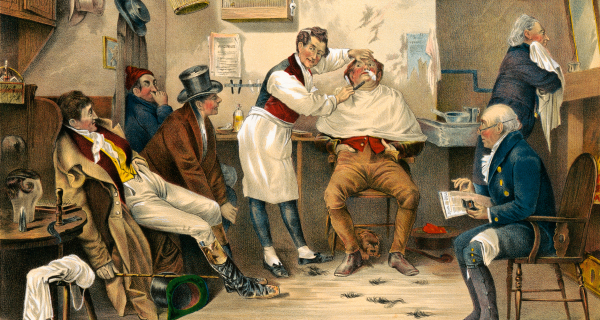 Forty-year-old song lyrics I can recite from memory:

I have a sad story to tell you, It may hurt your feelings a bit
Last night when I walked into my bathroom
I stepped in a big pile of Shhhh-aving cream, be nice and clean,
Shave every day and you’ll always look keen!

If you remember the song Shaving Cream, well, you’re old. Sorry, gotta tell it like it is. Originally released in 1946 (OK, really old), but then re-released in 1975 (old like me). It fit right in with the novelty song craze of the seventies. This was the era that brought us Kung Fu Fighting , Convoy, and Troglodyte.

From time to time, and way too sporadically, I write in my Gratitude Journal. This is a diary where I take some time to recognize the things in my life that make me happy. Some are deep (family), some are serious (coffee), and some are frivolous. Today I’m writing about Shaving Cream. Frivolous!

This is a topic that has been running through my head for thirty years. Shaving cream is all but free. In a market segment that seems to gouge consumers without embarrassment ($5 toothbrushes), shaving cream has skated by without the usual toiletry mark-up.

After observing this pattern for a year or so, I decided to undertake an experiment. I bought a new can of shaving cream, and I wrote the start-date on the bottom with a permanent marker. In the eighties, we didn’t call all permanent markers Sharpies yet. In fact, they were more likely to be Marks-A-Lot brand than Sharpie. I used my shaving cream sparingly. Not stingily, I used enough to shave, but I didn’t waste any.

After six months, the unpainted steel ring around the bottom of the can was so rusted, I was staining the porcelain. I threw the can away and called my experiment a success.

I don’t recall how much a can of shaving cream cost in the eighties. I’m thinking under a buck. An international toiletry manufacturer was letting me shave for a half a cent per day. Where’s the income in that?

Today, I use Gillette Foamy brand shaving cream. It’s pretty cheap stuff. $1.87 when it’s not on sale. I think the can size has shrunk down a bit so it only lasts about three months now. The bottom doesn’t rust any more, but this is probably due to a change in the metal. Aluminum now? So, a better product, and still only a couple of cents a day.

This is a complete bargain, especially compared to the razor blades. I use Gillette’s Mach 3 Turbo blades. This would be a stupid name for a car… or a skateboard. As a razor blade, it makes no sense at all. I almost expect the blade to rev-up and drive all over my face. These cost $20 to $25 for twelve blades. I think the blades are supposed to last about a week, so that’s about $100 per year on razor blades.

Me? I get a twelve-blade pack in my Christmas stocking every year, and I make those blades last until the next Christmas. I push each blade a full month. It hurts so much to shave at the end of that month that I truly look forward to swapping my blade.

So, Gratitude. I’m grateful that shaving cream has been overlooked as the cash-cow it deserves to be for the toiletry industry. It’s not like it’s optional. I’m not going to shave without cream. And I doubt I would even think twice if it were five dollars. I think someone is missing out on a lot of extra revenue. Thanks!

This post was previously published on JefftCann and is republished here with permission from the author.