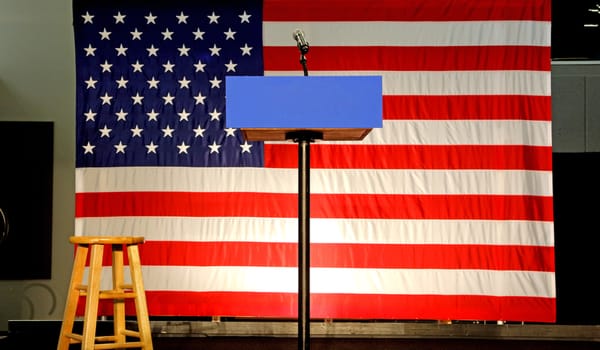 You know who you are…

You are a political party the leadership of which is having a hard time accepting that the game has completely changed. You’re hanging onto and playing by old rules, old methods and strategies, dismissed precedents, evaporated courtesies and respect for laws and policies that are no longer being acknowledged, recognized or heeded by your competition.

He’s changed the game on you, leaving the lot of you still fighting battles that he’s already winning.

You’re becoming a collective laughingstock as you continue to squabble and bumble about, being chided, teased and egged-on by the Game Show Host Press who are with few exceptions far more interested in ratings than in Truth. [Let us not forget that it was largely through the embraced corporate avarice of the Press that Trump was able to “win” the 2016 election cycle.]

“It May Not Be Good for America, but It’s Damn Good for CBS”

“I’ve never seen anything like this, and this going to be a very good year for us. Sorry. It’s a terrible thing to say. But, bring it on, Donald. Keep going.”

Never forget that, all in all; The Press Does Not Care About You…or Us.

So maybe change the game, yourselves.

Here’s how I think you can do it.

Enough with “Family Feud” debates. Y’all’re looking ridiculous. There is far too much brilliant, insightful and sorely-needed brainpower being misrepresented and chastised on that Debate Circus stage.

First, take the dialogue back from the Press. Most of them are too eager to seem “balanced,” far too afraid to have a spine and call out, time after time, the lies and misleading narratives that constantly pour forth from 1600 Pennsylvania Avenue.

Then: this is what I’d like to see this party do…

Warning: It’s going to take the setting-aside of personal ego in the name of Democracy and Freedom in America. You’re going to have to really want to evict the current resident of the White House, and you’re going to have to put the country before the political ambitions you have held so dear for so long that those long-treasured ambitions may already have become the filter through which you perceive everything.

Gotta clean up that shite.

You won’t have to throw them out; but you will have to embrace the spirit of them as motivation over aspiration. Politics can no longer be personal for you, though you will have to become personally committed to them in the name and for the true benefit of the USA.

Ready to know what it is; what this secret, audacious, rule- and groundbreaking plan entail?

For a minute. Just stop running.

Every candidate, just shut down and shut up for a week or so: then get together in order to get it together.

And, by “get together;” I mean every one of you 20+ presidential candidates from the Democratic Party should go away together to a place by the sea for a week.

Together. In Private. No press. With Party leadership; from the venerated to the liberated. You guys, the Big Guys and the New Guys; from Pelosi and Schumer to Ocasio-Cortez and the Squad – gather, talk, and make some hard decisions.

While you all have your fights, clear the air, say what you want to say, say what you need to say, blame, apologize, explain, ask your questions, listen to one another and get clear on what’s important: right here, right now, of dire importance.

(Hint: the answer is ending this presidency and cleaning up this magnificent, malignant mess into which we’ve gotten.)

When you return from this Week by the Sea – which is what it will be called in the History Books, “The Week By The Sea (that Saved the World)” – come out as an Administration.

And then RUN FOR OFFICE AS AN ADMINISTRATION.

Come out of that process with ONE candidate for President with all other erstwhile candidates positioned for specific positions or jobs: Cabinet members, Department Heads, Special Prosecutors…

Come out of that space, each of you knowing and sharing your coordinated and mutually embraced plan of action with your populace that is desperate-for-leadership-and-security. Show the country and the world that you are together and you are for the citizens and principals of the United States of America.

Spread out and head out across the country not as One Voice (that’s not even American!) but as One, Nationwide Cohort; bound and committed to assuring the country that you are on OUR side…then prove it.

Screw the Primaries; they’ve become a circus, and few actually believe they’ll be fair. Don’t wait for the convention to build a platform; come out with with your platform, already intact, supported, done. Right now.

The old ways are over and you need to get off your traditional asses and challenge – and eliminate – this malevolent maelstrom of hate and disorder that is taking this country down faster than you can say “quorum.”

You can exit that space as partners in getting that one person elected, replacing this entire Administration and defeating Trump. Show the country that you can and will work together, that every citizen will hear a voice they support in this administration and show us that you can think differently.

Take away the doubt; jettison past processes and show generations of voters that you are not irrelevant.

Show that you get it: that the old ways are dead and that the American Election Process is in critical need of revitalization.

The world has changed and it’s not going to change back.

You have to change in order to stop this tsunami of hate and divisiveness in which you are now irretrievably a part. (That last debate was a ridiculous example of what a joke the Party System has become.)

You do this and you will win.

All of you campaigning for ONE person.

There will be NO sore losers from the Primaries, nothing to clean up, no bad behavior of demonstrated enmity to rationalize or diminish. Imagine: a Civil Primary! No fallout from the battle for nomination. No attacks on each other. Rather, a willingness to form and present to your constituents a very public coalition, READY to evolve government and protect all citizens.

Can you imagine: knowing, on election day, who will be each of these officers, who will run each of these departments, who will be filling offices – some of which will have been effectively empty for the past four years? Imagine the security and confidence this will bring to the patriotic and committed staffs of Washington; knowing months in advance who’d going to run things and having time to gather, present and brief the Incomings.

They will see you coming and they will know who you are and you will be welcomed and embraced; over and above party lines and philosophies. The transition can begin immediately on election.

It’s going to take some serious ego-shedding. You’ve all got to go in with the idea that It Might Not Be Me; please get over that and seek the best combination of the best, most qualified and experienced talent in the right positions to clean up this mess and move into this damn century.

I believe that this will pave the way for a massively successful, revitalized Party.

Think you guys can do that?

Great. Here’s the list. Don’t come out until you have a name next to each title.

List of Jobs to be Filled for 2021 Democratic Administration

See? There’s room for everyone to have a VERY IMPORTANT JOB! (I’ll bet there is even a good spot for Marianne.)

Do this, and you will win. I guarantee it. Keep on as you’re currently doing, and Trump will be “elected.” Do not fall victim to the mirage of traditional procedures and processes. We all know they don’t work, anymore; you might want to note that.

The eyes of Your Nation are Upon You.

A nimble, collaborative producer and show director; Kile shows up with a career in the creation of Resonant Audience Experience: often offering effective new approaches to show, spectacle and ceremony. At his core is an innate ability to create Experience at any level of magnitude such that it connects and creates personal resonance for each member of an audience. Be it Civic Ceremony or Inaugural, Stadium Show or Sports Celebration, Theme Park Installation or Product Launch; on Ozier’s teams it’s never Just a Job. Everyone learns, everyone teaches; the best work of all is achieved.

He writes about Creativity, Love, Community, what moves and has moved him, self-awareness…and occasionally an opinion or two on the World Around Us.

And the man can roast a chicken like you ain’t never tasted.

Facebook81Tweet5PinEmailShares86
wpDiscuz
Share this ArticleLike this article? Email it to a friend!
Email sent!