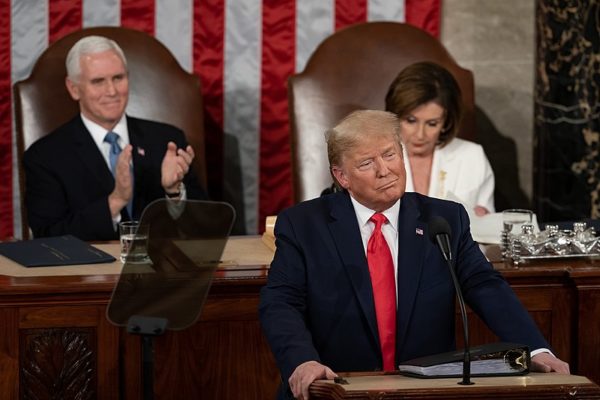 If enough time passes between its original stupidity and its ultimate worthlessness that, sir, is a tradition.

I don’t remember where I read that or who said it but I remember seeing it and thinking “hell yes.”  And it seems obvious the State of the Union address has reached its ultimate worthlessness.

Originally, the State of the Union was a vehicle for the President to convey “to the Congress Information of the State of the Union, and recommend to their Consideration such measures as he shall judge necessary and expedient.” For a long time, it was submitted as a written report. Woodrow Wilson began giving a speech as a way to marshal support for his initiatives. Then along came radio to spread the word. Television released the genie from the bottle and killed any sense of decorum and common decency.

It has become a campaign tool, pure, simple and undeniable. But, Trump’s monotone, lifeless delivery makes it almost unbearable. Maybe, when he is willing to go off-script he is a decent public speaker, but when he goes with the plan it is like Chinese water torture. It starts slow and small and builds with each drip into unendurable agony.

And this was before he awarded Rush Limbaugh the Presidential Medal of Freedom. Despite having one of the last surviving members of the Tuskegee Airmen in the audience Trump felt it appropriate to “pin the medal” on a radio show host, one of the earliest architects of the politics of outrage. One more slight to minorities and one more nod to hardcore supporters. It would have been hard to be any more inflammatory.

Finally, 78 minutes after it started he stopped. He tried to project a hopeful message at the end, but his strength comes with dissension. His power comes from discord and his promise of a better tomorrow sounds hollow and contrived. You start to think even he doesn’t believe it.

But, everybody was happy it was over. Half of the crowd clapped with enthusiasm, no one more than the President. I guess the Tale of Narcissus wasn’t taught at Wharton.

I just can’t think of any good reason to continue the charade, another campaign stump, another television camera and another shot at immortality. Let the president, every president, buy time for his commercials just like everybody else.

Facebook5Tweet3PinEmailShares8
wpDiscuz
Share this ArticleLike this article? Email it to a friend!
Email sent!