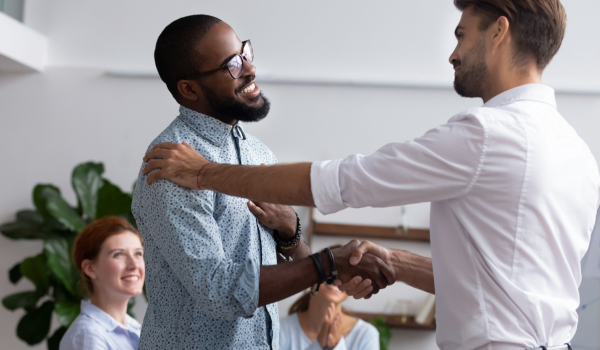 Back in the day at the Aikido Dojo, Sensei Dan was not one for empty praise. If I didn’t listen and follow his instruction in doing iriminage, clothesline to the opponent’s head, that wasn’t “Awesome”. No. Sensei would say, “Jon, you gotta move his head first…” When I finally got it and followed his direction, he’d say, “That’s it.” Then Sensei half-smiled and walked over to teach the next students. Amen.

Intentionally, as I evolved in my Aikido training, listening to Sensei from the space of nothing, mushin, there was less and less, “No, that’s not it.” As our partnership evolved too, Sensei refined my Aikido technique: a correction was in the nuance. Sensei might say, “Jon, just wait it out a little longer. Take a glancing blow if you have to.” As Yondan, 4th-degree black belt, I’d get what Sensei said quickly and regenerate the technique.

Sensei would watch me throw my partner in iriminage. Then he’d half-smile, “That’s it.” As usual, he’d walk on to the next students. I’d be almost 50 years-old. Yet, hearing that made me so happy. I was developing my greater-than version, albeit in the nuance. Also less volume on Sensei’s part as well. There was that, too.

Sensei Bobby and I trained under Sensei for over 25 years. Now, Bobby is my Sensei. In Sunday morning practice, Bobby showed me how to do a technique with the bokken, wooden sword. I got what Bobby said. I regenerated the technique. Sensei Bobby smiled, “That’s it.” That was an authentic acknowledgment. That was meaningful to both Sensei and me.

Over the years, like Sensei Bobby, I’ve adopted the acknowledgment: “That’s it.” Sensei Dan really didn’t care if what we did looked pretty or not. We had to be present, and do. We got what he said. We had to make it work for ourselves, not for anyone else.

In this day and age of political correctness, praise can be tricky territory. Life in its very design might not be even or fair. Granted, we all have our various strengths and frailties. When some beginner screws up an Aikido technique, by not paying attention and possibly hurting their partner, that’s not cool. No, that’s not awesome. I would say, “Stop. Be careful. Do it this way…”

No, not everything is awesome. Not everything is great, by definition. Yet, I want everyone to do their best, which will not be “my best”. Theirs, alone. When 14-year-old Lukas did his best version of Nikkyo, wrist lock technique, which doesn’t look anything like mine, I’d say, “That’s it.” He made it work for him.

Acknowledgment from Sensei wasn’t false praise that dilutes the Mastery journey. Even back when Sensei taught Bobby and me, he wanted us to evolve into the best versions of ourselves. That didn’t mean doing Sensei’s best, it was our best.

The perplexing paradoxical quandary: Do we praise mediocrity? Do we praise being average? No, not really. Yet, I believe that we acknowledge others for dedicating to becoming greater than they know themselves to be, in any magnitude or scale. When they continue to improve and grow, that deserves authentic acknowledgment.

No, praise is not reserved for perfection, which I believe is a ‘false god’. In the Japanese aesthetic wabi-sabi: There is beauty in our imperfection. Praise is for those who embrace the words of O-Sensei Morihei Ueshiba, “True victory is victory over oneself.” That’s the lifelong game worth playing full out. At least it is for me. In the bigger picture, that’s what Sensei crystallized for Bobby and me when he’d say, “That’s it.”

Yeah, Sensei would also loudly let us know when we failed to execute an Aikido technique. That was also part of the unspoken deal. Yet, it was our job to swallow our pride, listen, and just train. “That’s it” was about us making ourselves, and to a certain extent: making the world work.

We can acknowledge accomplishment, doing one’s best, becoming your greater-than version in the politically correct culture that seems to impose equality on varying circumstances, metrics, and innate abilities.

Sure, human design might be inherently unfair, not even. Yet in the bigger picture, our human design is becoming our greater-than versions. So perhaps, acknowledge others and really our own selves for our evolution, our sincere commitment to growth. Acknowledge by saying, “That’s it.” It’s just that simple. Just saying.

END_OF_DOCUMENT_TOKEN_TO_BE_REPLACED

Facebook22Tweet3Pin1EmailShares26
wpDiscuz
Share this ArticleLike this article? Email it to a friend!
Email sent!