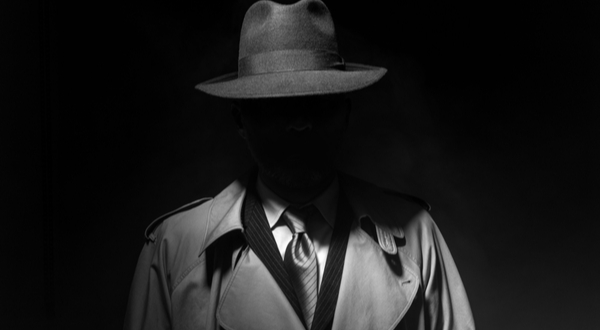 The minute she walked into my world, I knew she meant trouble.  A dame with long legs never brings good news.  If I was smart, I would have asked her to leave.  But there is something about a woman of confidence that always suckers me in.

“Our son can’t find his Being a Reader notebook.  I need you to find it,’ she said as she took a drag of her Starbucks coffee because we are old and don’t smoke anymore.

“You’ve got a reputation as a man that can solve cases like this.  I’m prepared to pay.”

“My price isn’t cheap.  Especially when I have to give up a nap.”

“Dinner tonight of your choice.”

I took the case.  I wish I let it pass me by like my last kidney stone.

There were three suspects and none of them were talking.  It’s funny how everyone gets amnesia all of a sudden.  But now that I was on the case, there was no turning back.  It’s that kind of behavior that ruined my napping schedule, but as they say, old habits die hard especially when a dame comes calling.

I started with the oldest.  Long hair with clever eyes, she was giving up nothing.

“Where were you today during clean-up time,” I asked.

She thought for a moment as if she had just met her conscience for the first time.

“Go talk to the 13-year-old,” she said.  “He may know something.”  Then she closed the door to her room to continue whatever Tik Tok rituals teenagers have going on.

The next suspect wasn’t easy to find but once I got a sniff of the trail, I have to follow it to the end.  Hidden in what is known as the Toy Room, he was doing his school work.  The puppy he keeps as a guard dog wouldn’t let me pass, and he took a chuck out of my heel.  But I’ve been down this road before and distracted him with a piece of bologna that had sat out all night in the kitchen.

“Someone told me you may know the whereabouts of a certain workbook. The green one,” I said.

The mastermind leaned back in his chair and finally took his eyes off his books.

“Well, well, well.  I thought you would be paying me a visit,” he said as he ate a Fruit Roll-up.

“I may know something, but it comes at a cost.  I trade in knowledge.  It has power.  The real question is not if I know where the workbook is, but how much are you willing to pay?”

And there it is.  Nothing in this life is free.  It either costs money or ulcers, but either way, you’re going to have to pay.

“Thirty minutes extra screen time, and an hour of gaming with me,” I offered.

“You try my patience.”  My hands tightened on my phone, ready to kill the WIFI should things get dicey.  The guard puppy growled at my feet.

I knew he had me.  As I sat thinking, my phone buzzed with an email from The Teacher.  It began “Mr. Carpenter, your son has lost…”  I didn’t bother to read the rest.

“Done,” I said. Sometimes you gotta know when you’re beat.

“I would ask the little one where he was last. I saw him sitting on the couch with that very workbook earlier today.”

I left as fast as I could.  Then I found him, the one that had started it all.  A small little fella, but I wasn’t fooled by his cute smile and peanut-butter-covered fingers.  I knew trouble when I saw it.

“Spill it.  Where’s your notebook?” I asked him.

“Both The Teacher and your mother think that you do.  That’s right, your mother hired me.”

“Never trust family,” he said.  “It will always be your downfall.”

Then he ran, and I gave chase.  His 8-year-old legs found sure footing as I stumbled.  My trick knee gave out on the stairs and for a minute I was at his mercy.  He looked down on me.  A slight smile on his lips turned into a sneer.

“You’ll never make me do schoolwork!” he said.

But I wasn’t beat just yet.  Sometimes, old dogs can learn new tricks.  From my pocket, I took out the Nintendo Switch and held it out to him.  Knowing that he could never resist, his eyes glossed over as he took a step towards me.  That was his mistake.

I grabbed him.  “Tell me where you were last when you had your notebook!” I screamed.

“Never!” he screamed back.

I threw him over my shoulder and took him to the living room.  We struggled.  He went for my eyes.  I dodged.  The battle was as pretty as a New Mexico sunset in June.  I lifted the couch and shoved him under there.

We checked between the cushions.  Moved the ottoman and a black cat hissed.  We journeyed to behind the TV where only the most lost go.  And yet, no workbook.  I got another email from The Teacher.

Some cases aren’t meant to be solved, and what they cost is your soul all because a dame had to walk into my world.  But then, I thought of something.  It was crazy and made no sense but nothing about this case made sense.

“You went to your friend’s house yesterday afternoon, right?”

I took a chance because sometimes a chance is all you have left.  I went out to the backyard to our deck.  And there, in a potted plant, was the workbook Being a Reader.  As green as the vegetation it sat next to.  The case was solved.  I emailed The Teacher and The Mother.  I didn’t expect a reply but a thank you would have been nice.

At dinner, I sat with the dame that caused all this trouble to begin with.  I sipped my bourbon, a Kentucky blend that is slowly becoming my best friend.

“I have a case for you, Mr. Carpenter.  If you’re interested,” she said.

Her tilted head and seductive smile told me that she knew I would.