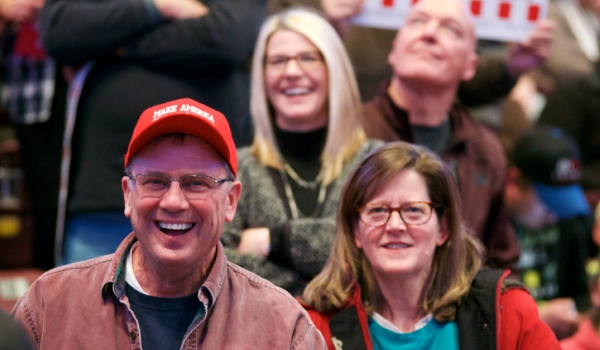 Those of us who have been involved in 12-step recovery movements over the years understand the term “codependent,” a take-off on the original term “co-alcoholic” for family and friends, often a wife, of an alcoholic who, because of the partner’s own addiction, has centered his/her/their behavior around the hope that, for the good of the relationship, the person will eventually change. Often the partner calls him/her off work when drunk or hungover or might say, “Well, s/he really didn’t mean that” concerning an inappropriate public remark made when drunk.

Probably the two key books published in the 1980s following the adult-children-of-alcoholics movement were Melody Beattie’s “Codependent No More: How to Stop Controlling Others and Start Caring for Yourself” and “Women Who Love Too Much: When You Keep Wishing and Hoping He’ll Change” by Robin Norwood. I’ve read the latter book which, despite my being a man, proved very insightful.

You can guess where I’m going with this. The vast majority of evangelical Christians who support President Donald Trump seem to have this delusion that he will suddenly turn into a strong Christian leader who will wipe the “enemies of God” from this nation — this despite his womanizing, abuse of workers, stiffing of contractors, ignorance of basic Scriptural principles and lack of humility and remorse. They do so likely because he demonstrates hatred toward many of the same people that they do — those of color, Hispanics, Muslims and, especially, those of a more politically liberal bent.

I think we need to face facts: Trump is who he is and will, and likely can, not change because, as the active alcoholic, his own needs take primacy over everything and everyone else. We also need to face that, because of our own emotional ties to him, the Good News of redemption and reconciliation through Jesus Christ is being besmirched, sabotaged and downright compromised. And that also may say something about us as well because, rather than an attitude of selfless service, we often display one of bullying power for the sake of maintaining our privileged status.

I don’t see Jesus in that at all, and you can bet that much of the rest of the world doesn’t, either.

The irony is that Lois W., wife of Bill, the founder of Alcoholics Anonymous, was encouraged by her husband to find her own recovery; according to the biopic “My Name is Bill W.,” he had to confront her because she had become so accustomed to his drinking that she couldn’t handle his being sober and accused her of trying to pull him “off the wagon.” She thus started Al-Anon, which uses the exact same steps and principles of AA, originally as a support group for wives of alcoholics but which has since opened to anyone in any kind of intimate relationship with an alcoholic.

And the first thing you learn in Al-Anon — and I did attend meetings myself for quite some time — is that trying to change a person to suit you is not only impossible but indeed shouldn’t be the focus anyway. There’s a reason the church has no business having any relationship with any politician — it has a mission to accomplish, and coddling or bashing elected leaders inherently interferes with that purpose.

Look, I don’t particularly care if Trump says he wants to end legal abortion or even takes steps to do so; after all, addicted people often make promises just to keep their subjects in line even without a conviction. This is what happens when we declare such a flawed-person a messiah — we forget that he too will have to face God someday, where the one question to be asked is “How well did you reflect Me?”.

This is yet another reason I say, “Either Jesus or Trump.” Ultimately, you will have to choose.

This post was previously published on Uncommonsensecommentary.blogspot.com and is republished here with permission from the author.