Get Daily Email
Join/Login CLOSE
Home / Featured Content / The Sense of an Ending: Divorce in the Time of Corona 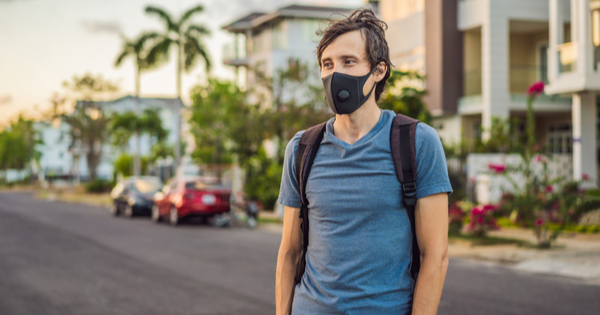 I bowed, offering my forehead to the guard at the entrance of the parking garage. The guard held a thermometer inches away from my skull. The infrared wavered in the summer morning’s humidity.

My work had called back all its furloughed staff like me under the Paycheck Protection Program. Before that, only fifteen people, mostly leadership’s senior team had stayed on salary waiting for the state of Florida to offer guidance. They had decided how things would change. They reopened the building with new protocols. Everyone would wear masks and stay away from each other as best as possible despite being in cubicles.

The senior team must have thought that staff would say they were O.K. So, everyone’s temperature was checked. But who took the temperature of the guard taking temperatures? The guard was close enough for me to see his face mask inflate from exhaling.

All the staff corralled outside of one entrance from the parking garage to the enclosed sky-bridge into the building. We wore bandanas like bandits stealing back into work. We wore cloth masks craftily made in the once seemingly infinite minutes when we stayed at home. We wore surgical masks, sterilized and ready to go into a non-medical facility. We wore N95s like we were entering a biohazard.

The sliding glass doors unlocked in an electronic click. One by one the staff entered. Stickers stuck on the bridge’s carpet traced a path of how far apart we needed to stand together.

I looked overhead at the rainbow of glass hearts hung from the rafters that caught the sunrise. The light pulsed through the hearts like the beat that once thumped through those souls killed at the nightclub. Nearly as many people had died in the county from the virus. How could anyone compare death to death, though?

I plugged in the fridge and the microwave and the coffee maker. A sharp film of bleach cut through the plastic and rubber of the dormant appliances. I put my marked lunch container in the fridge.

I had crossed out L.’s last name next to mine. Once, we had used the same containers. Now, I used them for salads since my solo cooking didn’t leave leftovers.

A fragrant hint of powder and blossoms trailed from my office that I shared with my direct report. Her perfume was strong, perhaps stronger after being alone in my studio alone with my own stale smell. It had been a month since I had smelled any woman.

Of course, I thought of L. but I couldn’t recall the smell of L. She could have been jasmine or lavender or vanilla. I tried to think, to recall, to conjure her, but there was no thought, no memory, no magic.

I remembered how we had prepared for the last disaster. A hurricane threatened enough for both of our offices to close. The hurricane was one that scared Floridians who dealt with storms every year.

We had sleeping bags and my cat’s carrier in the bathtub of the central bathroom of our ground-floor apartment. We had thought we would have to spend the night held in the center of our building. We had filled our backpacks with water bottles, a change of dry clothes, rain gear, sandals, our social security cards, birth certificates, and our wedding license. We were ready to escape together even if we had to walk out of there holding hands with only our rings on our fingers.

The hurricane spun out; it dissipated just before L. said she didn’t want to be married anymore. It didn’t do damage like she had. Our apartment was dry. We were fed. My cat was safe. We still had our jobs.

I wondered if L. and I could have cleaved another way. If we had had to face disaster then would we have stuck together instead of cut apart? We would never know.

I left our apartment for a studio. I took my cat. We still had jobs, just not each other.

Later, my supervisor calls me. He says that his supervisor in H.R. wants to talk to us. I know what this is but that doesn’t help.

All I want is for my direct report to not have to take this same walk with me up the stairs and down the hallway past the shut-off water fountain. The building feels stuffy like the saving of cents by running the air conditioning less. The air is thicker than when I gasped after L. said it was the end. I don’t want my direct report to have to sit in the chair that stinks of doubt and fear from other, former staff. I hope that I smell like acceptance.

I hear the words, but I look out the window. The palm fronds sway. They wave good-bye.