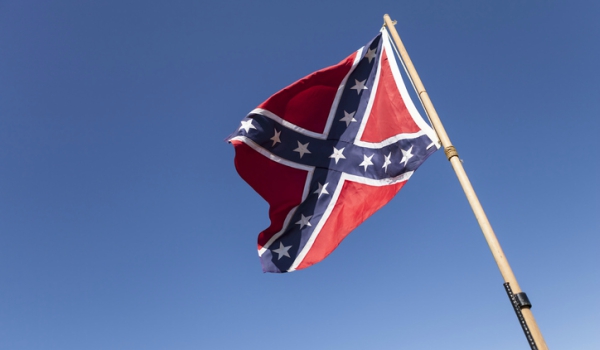 Enough with the “Party of Lincoln” nonsense. The Republican Party is now the Party of Trump, and that means the party of nativism, racism, religious bigotry and white nationalism.

They no longer campaign for office on platforms of small government as a matter of economic principle. They no longer advocate free trade. Rather, they beat the drums of xenophobia, speak of the nation being “overrun” by swarms of dark-skinned others, and warn of the existential threat to western culture itself posed by migrants of color and Muslims.

And their congressional representatives stand by while their leader — the President — tells four congresswomen of color to go back where they came from if they don’t like America as it currently exists, under his administration.

Rather than calling out this racism for what it is, Republican leaders were more upset about Democrats labeling Trump racist than for Trump being racist. And polls indicate the president’s approval rating went up among Republicans after he did it. Both are definitive indications that the party has now decided to go all-in as a white nationalist cult.

The GOP has finally and fully metamorphosed into the very thing it initially opposed. They are the new second coming of the Confederacy, resurrected from its ignominious defeat over 150 years ago.

It’s ironic because Republicans never tire of reminding everyone that the Democrats were the party of southern confederates. It’s a way to position themselves as the party that has always opposed racism and white supremacy, while the Dems were the party of slavery, segregation, and lynching.

Of course, the only way anyone can make this argument with a straight face, and use it to score modern political points, is to ignore some significant contemporary developments.

First, it is conservatives, and indeed GOP lawmakers in southern states in particular, who are today the most vociferous defenders of the symbols of the Confederacy.

They are the ones who support the continued flying of the confederate battle flag.

They are the ones who deny it’s a symbol of racism, even as progressives and Democrats call for its removal and are clear about the racism that motivated the government whose army flew it.

They are the ones who fight to keep statues standing that glorify confederate war generals as valiant soldiers for a noble cause, while most progressives wish to remove them and consign them to museums. After all, the left sees these worship altars for what they are: tributes to traitors and racists who fought for a government whose admitted purpose was to maintain slavery, and whose states joined it for precisely that reason.

Historian Kevin Kruse has noted the unmistakable trend on his Twitter feed:

They are the ones — like Donald Trump himself — who insisted that some among the white supremacists in Charlottesville for the “Unite the Right” rally were “good people,” because they were only there to defend southern heritage as represented by those statues. Democrats didn’t say that. Liberals and leftists surely didn’t.

The idea that the Democrats of today are the party of slavery, segregation and lynching, and that liberals, in particular, are the inheritors of the confederate mantle would be hilarious were it not so completely untethered from reality.

People say these things as if we don’t have Google.

Or eyes, with which to see this: 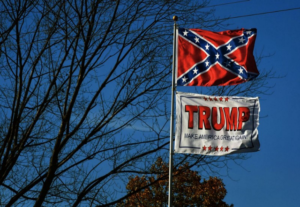 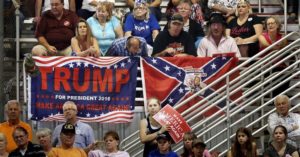 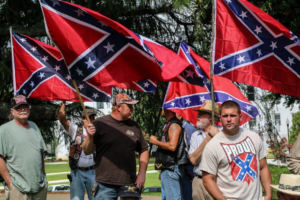 …one will find Obama and Hillary Clinton supporters.

They say these things as if we will forget the accolades for the Confederacy offered not by any liberal publication, but by none other than Breitbart in 2015, during the tenure of Steve Bannon:

…might include among them Democrats and particularly liberal ones at that.

They say these things as if the kind of people who make and purchase racist, puerile shit like this, and put it on their bumpers just above their truck nuts…

…are flaming leftists, rather than the Trump-supporting, uneducated, bigoted, and irredeemable know-nothings they actually are.

In other words, to claim the Democrats or Republicans of the 1860s are equivalent to their namesakes today is intellectually lazy and nonsensical. The parties have changed quite a bit even in the past sixty years to say nothing of the past century-and-a-half.

In the 1950s, for instance, the GOP platform included praise for labor unions and the expansion of the minimum wage, support for the UN, expansion of Social Security, more government intervention in job and housing markets, and even an Equal Rights Amendment. All of these are positions they would run from today and have abandoned.

And at that same time, the Democrats — in their southern iteration — were militantly committed to the maintenance of segregation: a position they abandoned with the presidency of Lyndon Johnson, while it was the Republican candidate, Barry Goldwater, who courted (and captured) the southern segregationist vote.

For instance, Major League Baseball’s Dodgers once played in Brooklyn. Now they play in Los Angeles. Both Dodgers, but ya’ know, different.

See how that works?

The Republicans long ago decided to court racism, initially with dog whistles, just obtuse enough to afford plausible deniability to those engaged in the practice. Don’t take my word for it: consider the words of the late Lee Atwater, one of the nation’s most prominent Republican political consultants, who explained the game that he and others like him had been playing for years.

In a 1981 interview, he noted that by the 1960s it was no longer acceptable to use blatant racial slurs to gain votes; as such, conservatives had to use more abstract language to get the point across.

The only difference now is that rather than dog-whistling, the Trumpist GOP has opted for bullhorns. They are broadcasting their hatreds for all to hear and leaving no doubt as to what and who they are.

Anyone from this point forward who remains in their camp, who votes for their candidates, or who supports their continued existence as a political force is an adversary of everything decent about this nation.

They have declared war on the principles of justice and equity and pluralism.

They cannot be reasoned with.

They cannot be made part of a broad political coalition.

They can only be defeated: entirely and without the least bit of mercy.

We should have salted the earth after Appomattox. But I guess it’s better late than never.

Facebook302Tweet2PinEmailShares304
wpDiscuz
0
0
Would love your thoughts, please comment.x
()
x
| Reply
Share this ArticleLike this article? Email it to a friend!
Email sent!