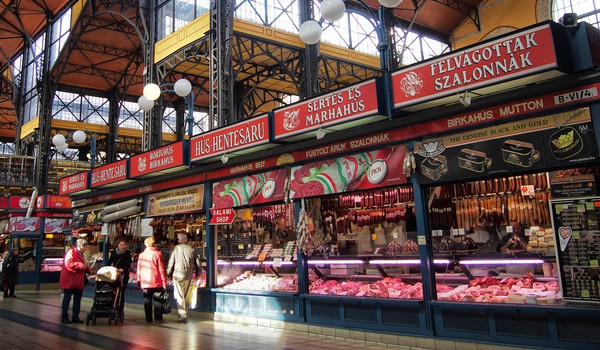 —
LONDON, 12 October, 2018 – The hopeful news is that by mid-century a well-fed world may be able to feed everyone alive, while halving the gases causing global warming. There’s just one snag: for most of us it would mean an almost meatless diet.

On 8 October global scientists said the world must make “rapid and far-reaching changes in all aspects of society” to keep global warming from reaching unacceptably dangerous levels. They included the food we eat as one sector demanding radical change.

Bang on cue, a report by a separate group of scientists says the 10 billion people expected to be living by 2050 could enjoy sustainable food supplies – while emissions of the greenhouse gases that are warming the Earth fall by more than 50%.

But, for this to happen, the rich world would have to pay a high price, while the poorest people still faced malnutrition and hunger.

The report says Westerners need to make a drastic switch away from meat and dairy products, cutting their consumption of beef by 90% and eating five times more beans and pulses than they do today to stave off hunger. Similar though slightly less radical changes are in prospect for people in other prosperous countries.

The researchers who wrote the report, published in the journal Nature, say it is the first to quantify how food production and consumption affect the planetary boundaries that define a safe operating space for humanity, and beyond which the Earth’s vital systems could become unstable.

“No single solution is enough to avoid crossing planetary boundaries. But when the solutions are implemented together, our research indicates that it may be possible to feed the growing population sustainably,” said Marco Springmann of the Oxford Martin Programme on the Future of Food and the Nuffield Department of Population Health at the University of Oxford, UK, who led the study.

“Many of the solutions we analysed are being implemented in some parts of the world, but it will need strong global co-ordination and rapid upscale to make their effects felt”

“Without concerted action, we found that the environmental impacts of the food system could increase by 50-90% by 2050 as a result of population growth and the rise of diets high in fats, sugars and meat. In that case, all planetary boundaries related to food production would be surpassed, some of them by more than twofold.”

A global shift towards healthy and more plant-based diets, halving food loss and waste (about a third of the food produced is lost before it can reach consumers), and improving farming practices and technologies, is needed to feed 10 billion people sustainably by 2050, the study says. Adopting these options cuts the risk of crossing global environmental limits on climate change.

But there will be other advantages too, the researchers say – reductions in the use of agricultural land and freshwater, and in the pollution of ecosystems through the over-use of fertilisers.

The study, funded by EAT as part of the EAT-Lancet Commission for Food, Planet and Health and by Wellcome’s “Our Planet, Our Health” partnership on Livestock Environment and People, combined detailed environmental accounts with a model of the global food system that tracks the production and consumption of food across the world. With this model, the researchers analysed several options that could keep the food system within environmental limits.

They found that climate change can be checked enough only if diets change to include more plant-based food and reductions in meat and dairy products. Adopting more of these plant-based “flexitarian” diets globally could reduce greenhouse gas emissions by more than half and cut fertiliser application and the use of cropland and freshwater by between a tenth and a quarter.

But dietary changes alone will not be enough, the researchers say. They argue that improved agricultural management and technology will be essential too. Increasing yields from existing cropland, balancing fertiliser application and recycling and improving water management could, with other changes, reduce those impacts by around half.

A significant contributor to food insecurity is the deterioration and loss of soil. By one calculation, a third of the world’s arable land has been lost to erosion or pollution over the last 40 years. Restoring lost soil quality helps to increase harvests and slow warming.

The report says the world will have to halve wasted food to keep within environmental limits. If that happened worldwide, it would reduce environmental impacts by up to 16%.

EAT is a science-based global platform for food system transformation founded by the Stordalen Foundation, Stockholm Resilience Centre and Wellcome.

Fabrice de Clerck, its director of science, said: “Tackling food loss and waste will require measures across the entire food chain, from storage and transport, over food packaging and labelling, to changes in legislation and business behaviour that promote zero-waste supply chains.”

“Many of the solutions we analysed are being implemented in some parts of the world, but it will need strong global co-ordination and rapid upscale to make their effects felt,” said Dr Springmann.

“When it comes to diets, important aspects include school and workplace programmes, economic incentives and labelling, and aligning national dietary guidelines with the current scientific evidence on healthy eating and the environmental impacts of our diet.” – Climate News Network

This post was previously published on climatenewsnetwork.net and is republished here under a Creative Commons license CC BY-ND 4.0.
—
—