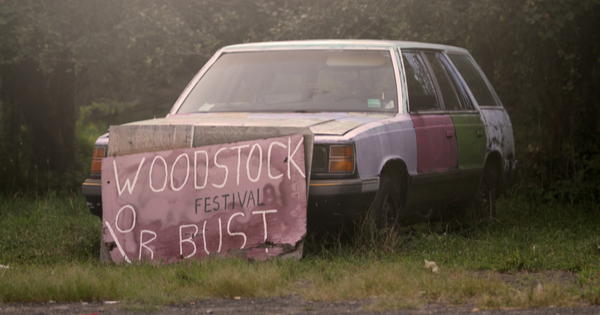 It’s not exactly a book for earnest seekers of everyday spirituality, but I’ve always been attracted to that “off the beaten path” approach. This summer I picked up Barney Hoskyns, Small Town Talk. It’s the story of Woodstock, not the festival that captured the imagination of a generation, but the town and all the characters that came here beginning with Bob Dylan in 1964.

Hoskyns is a fine writer and he weaves the narrative of this Catskills town from its famous residents, now long gone, to those less well-known carpenters and mechanics who currently occupy the town.

There was a music festival that was supposed to be held in this town in 1969, but a variety of factors forced its relocation 60 miles away to Yasgur’s Farm. That event put Woodstock, NY on the map, and every year tourists come to the town looking for the site of the festival. What they find is a small town of about 5,000 people, some of whom moved here after that festival and now their children run shops, inns and repair cars. There is an arts scene today, but forty years ago it was Jimi Hendrix, Janis Joplin, The Band and Van Morrison along with others who played music and ate in local cafes.

In my book Everyday Spirituality, I wrote a chapter about music. There I reflected on the third sacrament as a gift of the sacred. Hoskyns paints a portrait that is quite down to earth. One might wonder how spiritual music really is as you read this book. But, I would suggest, that it is in the blood and guts, the loves lost and gained, the fear and redemption of these musicians lives that we find a certain holiness.

I was born a little late for this sixties adventure. So reading about this time period is more history than biography for me. If I want something from a period I lived through, I’ll have to pick up Hoskyns Hotel California, which chronicles the early 1970’s and the West Coast version of Woodstock.

But, that’s a read for another day.