Get Daily Email
Join/Login CLOSE
Home / Featured Content / What Is a Best-Selling Author? 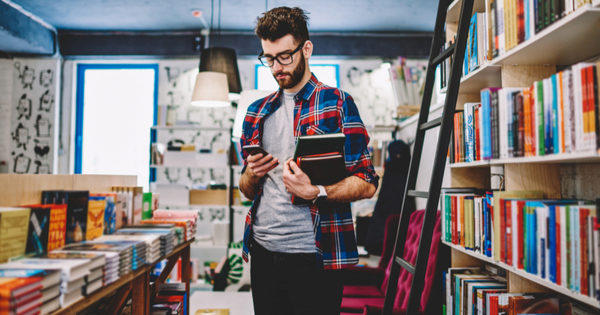 The lyricism of marginality may find inspiration in the image of the “outlaw,” the great social nomad, who prowls on the confines of a docile, frightened order.

I read the Best-Selling (New York Times Nonfiction Best Sellers list) book “The Long Tail: Why the Future of Business Is Selling Less of More” by Chris Anderson” in 2006. In it, he writes,

What we’re now starting to see, as online retailers begin to capitalize on their extraordinary economic efficiencies, is the shape of a massive mountain of choice emerging where before there was just a peak…. By necessity, the economics of traditional, hit-driven retail limit choice. When you dramatically lower the costs of connecting supply and demand, it changes not just the numbers, but the entire nature of the market. This is not just a quantitative change, but a qualitative one, too. Bringing niches within reach reveals latent demand for noncommercial content. Then, as demand shifts toward the niches, the economics of providing them improve further, and so on, creating a positive feedback loop that will transform entire industries — and the culture — for decades to come.

I was so inspired by this prospect that I decided to bypass the traditional media behemoths and independently produce, write, and direct a DVD entitled “Yoga for Depression and Anxiety.” For a few hours in the middle of its first December online on Amazon, as people franticly purchased Christmas presents for their loved ones, my independently produced “Yoga for Depression and Anxiety” DVD was the #2 “Best-Seller” IN ITS PARTICULAR CATEGORY and I shipped over a thousand copies from my tiny apartment in Oakland that week.

To be honest, I think many people purchased “Yoga for Depression and Anxiety” as either a stocking stuffer or as a joke-present to not-so-subtly tell their loved ones to stop complaining. Or both.

The Internet has given people like me the opportunity to compete with legacy media companies. It provides individuals a long tail to compete with corporate-backed celebrities but/and it also gives everyone the ability to vastly exaggerate his or her own accomplishments under the guise of “marketing”;  specifically, I have come across scores of people declaring themselves “Public Figures” on Instagram and “Best-Selling Authors” on LinkedIn and other autobiographically generated media with no third-party verification. (And if you were a “Public Figure” or a household “branded” name wouldn’t we already know it? Does anyone besides Kim Kardashian write “Public Figure” as the profession on his or her tax return?)

As Andy Warhol so presciently prophesized: “In the future, everyone will be world-famous for 15 minutes.” What Warhol didn’t anticipate was the capitalistic impulse to “fake it until you make it.”

When I started corresponding with my dear friend Katherine Woodward Thomas, who wrote the preface to “How To Survive Your Childhood Now That You’re An Adult: A Path To Authenticity and Awakening,” I immediately was struck by the footer of her email:

Bravo! Katherine sold hundreds of thousands of books and improved the lives of hundreds of thousands of people (including mine) and she earned the right to call herself a Bestselling Author! However, soon after connecting with Katherine, I started noticing on LinkedIn and Instagram hundreds of people referring to themselves as “Best-Selling Authors.” I reached out to a few of them and asked them to please send me the lists that their books graced as Best-Sellers. As you can well imagine, nobody replied.

When we see an advertisement for a Bourne Identity franchise film and it says “Starring Academy Award Winner Matt Damon” we all understand that Matt Damon is no Meryl Streep and recall that his Academy Award was for co-writing “Good Will Hunting” with his childhood friend Ben Affleck. There is something disingenuous about this sort of advertising. Does winning an Academy Award for writing mean that we should shell out $17.50 to watch Matt Damon attempt to act?

For the first few minutes when “How To Survive Your Childhood Now That You’re An Adult” was released on Amazon, here is how it appeared:

Yes, for an extremely brief amount of time my book was the #1 New Release on Amazon. According to Techcrunch.com, there is one new book released on Amazon every five minutes, which means that EVERY BOOK IS A #1 NEW RELEASE ON AMAZON FOR APPROXIMATELY FIVE MINUTES.

Does that mean that every individual who has a book on Amazon – even a self-published book – is a Best-Selling Author (FOR FIVE MINUTES)???

The New York Times Book Review Best-Sellers list is the gold standard of Best-Seller lists and, according to various sources, to grace that list a book has to sell between 5,000 and 10,000 copies that week. This list is highly coveted because being on the list vastly increases a book’s sales. I greatly appreciated Eric Weinstein’s first “Portal” podcast where he and his boss Peter Thiel agreed that all systems have become corrupted — our healthcare system, our government, our agricultural system, our electoral system, our educational system, etc. The New York Times Book Review Best-Sellers list is not immune to corruption and I personally know of two instances where it was gamed to get books onto the list: 1. my best friend was an agent who arranged for his celebrity client to do book signings in specific New Jersey malls on specific days that he learned directly reported their sales to the New York Times and 2. another dear friend reported of a celebrity who asked the CEOs of major corporations to purchase copies of his book as presents for all of his employees on one particular day so that there were more than 10,000 books sold that week. Both books were Best-Sellers and enjoyed massive success.

At the risk of sounding like the Media Police, is it too much to ask for truth in advertising? Yes, I understand how difficult it is for any good capitalist to have personal integrity when all of the competition is lying, cheating or gaming the system, but these “Reality Distortion Fields” à la Steve Jobs that are inspiring individuals to “fake it until they make it” (c.f. Donald Trump, former President of the United States of Amerigo Vespucci) — well, if you watched “The Social Dilemma” you will understand that it is splintering our society.

We need to stop looking at every other human being as a potential client, as a wallet with legs. We need to replace competition with compassion.

So until there is some new agreed-upon standard of what constitutes a “Best-Selling Author,” I recommend that you consult several sources before deciding if this often self-anointed accolade — mostly on self-published books — is bonafide or not.