Get Daily Email
Join/Login CLOSE
Home / Featured Content / What’s a Penis Got To Do With It? 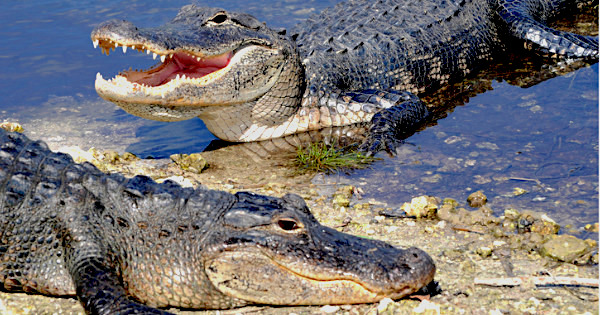 I’ve always been interested in the natural world, and it was my interest in the alligators of Lake Apopka, Florida, that sparked my interest in gender identity.

I know: it seems strange at first.

But the link between these fierce beasts and gender can be seen quite clearly along the shore, north of State Road 50, where the Tower Chemical Co. pesticide plant once operated.

In 1980, the company was found to have discharged a chemical called dicofol into ponds that emptied into the waters of Lake Apopka. Dicofol kills mites and continues to be sprayed on fruit crops today.

A few years after these spills, when reproductive endocrinologist Louis Guillette began studying the alligators for the state of Florida as a potential renewable resource for ranching, only a small percentage of the eggs hatched at Lake Apopka. At another nearby lake, protected in a wildlife preserve, some 80 percent did, and the little baby boy alligators had fully formed penises.

But at Lake Apopka, the baby boys’ penises were a quarter of normal size. Other males were born intersexed. In some no circulating testosterone could even be measured. That was when Dr. Guillette began asking questions.

As it turns out, the pesticide dicofol acts like the hormone estrogen once it is in the mammalian body.

Dr. Guillette’s earliest work came to my attention when I represented the public interest on a safe seafood committee at the National Academy of Sciences in Washington, D.C. Because gators were considered aquatic, they had become part of my purview too, and I had to study them for pollutants in their flesh.

Working completely independently, I too was finding evidence of dicofol’s known contaminants in alligator meat from data the Food and Drug Administration had provided me under the Freedom of Information Act. I had been concerned with dicofol and cancer. But these effects were different and far more wide ranging.

WHERE ARE THE BOYS?

A few years later, in 1996, I began to make sense of the gators’ plight in a human way. This time, it had to do with a close relative of dicofol called dioxin. Both dicofol and dioxin are organochlorines, which are generally powerful synthetic carcinogens.

Dioxin, however, is thought to be the most toxic chemical known to humankind (and has been used to poison political dissidents). Measured in the parts per trillion, which is the equivalent of a grain of a salt in an Olympic-sized swimming pool, dioxin also acts like estrogen in the human body.

Following a massive explosion in Seveso, Italy, Italian scientists found that fathers exposed to dioxin when they were younger than 19 years of age sired significantly more girls than boys. Instead of the typical ratio in humans of 106 males to 100 females, this cohort had produced 26 boys to 48 girls through December 1984. Updated findings have continued to report sex-ratio anomalies.

More reports have shed light on the neurological effects of these and similar chemicals. Scientists have discovered similarly acting, estrogenic substances have begun to inundate our everyday lives: bisphenol-A in the plastic linings of canned foods; phthalates in beauty products; and chemicals called poly and perfluorinated alkyl substances (PFAS) in our tap water. Scientists coined the term endocrine-disrupting chemical (EDC) to describe the similar properties of dicofol, dioxin, bisphenol-A, phthalates, and PFAS.

In 2013, reports emerged about another Italian environmental disaster. Male boys in the Veneto region were exposed during pregnancy to the PFAS family of EDCs used to make Teflon and other heat-, stain-, and fire-resistant materials. These EDCs contaminated the drinking water their mothers drank or bathed in while pregnant. The boys’ penises and testicles were smaller than normal, and they had suffered sperm damage.

All the exposed boys had smaller-than-normal anogenital distance (AGD), the distance between the male genitalia and the anus.

A smaller-than-normal AGD indicates physical male demasculinization. More studies were published from other exposed populations that told essentially the same story. But I felt as if I were in a cave, chasing shadows. The effects couldn’t simply stop at the physical. How deep within the human body did they actually go?

The two largest sex organs in the human body are the genitalia and the brain. That is what I learned from a team of neurosurgeons and brain researchers from the Netherlands Institute for Brain Research of the Royal Netherlands Academy of Arts and Sciences.

According to their research, the sex organs develop earlier than the brain with genital development completed in the first trimester and brain development continuing throughout pregnancy. However, since each organ develops at different times with different bursts of the sex hormones, the two don’t always match.

It can also happen that, within the context of a toxic environment, perturbations, measured in the parts per billion and parts per trillion, disrupt these hormone flows to the fetal genitalia and brain.

Receptors that would be filled and activated by endogenously produced hormones become occupied by toxic estrogen mimics that have passed through the placenta into the baby’s bloodstream. An infusion could block the impact of androgen hormones necessary to the developing brain.

In fact, that’s what we learned from scientists at the University of Rochester where they have associated prenatal exposure to EDCs with feminized play behavior in young boys.

Yet, our brains are not gender monoliths. They are gender mosaics, and the distinction between the female and male brain is not always clear-cut.

Brain regions may be more or less programmed by androgens and estrogens from the environment and placenta, leading to greater or lesser masculinization. Cortical thickness, gray and white matter densities, the brain’s very topography are influenced with a lasting, genetically imprinted impact.

“This ‘mosaic’ of maleness and femaleness occurs among cisgender and transgender individuals,” say researchers in the journal Neuropsychopharmacology. “A genetic component may also be involved, as siblings of transgender individuals are more likely to be transgender compared with the general population,” they add. But environmental chemicals also trigger genetic expression.

The biggest lesson we should take away from this emerging science is that gender identity is complex, evolving science.

We still are mapping the brain and beginning to understand the impact of environmental chemicals on the male sex, much less women, persons of color, and other minority communities. (Much of the research right now appears to be skewed to studying persons assigned as boys at birth.)

We should no longer think of the human brain as a monolith of maleness or femaleness. It is a mosaic with each region impacted differently by EDCs, producing innumerable combinations and degrees of behaviors on the male-female continuum.

In 2016, when North Carolina enacted anti-transgender legislation restricting restroom use to gender assigned at birth, politicians demonstrated an outdated understanding of gender identity that no longer reflects science.

Yet, anti-trans bills that target transgender and nonbinary people for discrimination, such as by barring access to or even criminalizing the use of appropriate facilities, including restrooms, restricting transgender students’ ability to fully participate in school and sports, barring health care for transgender youth, allowing religiously motivated discrimination against trans people, or making it more difficult for trans people to get identification documents with their name and gender have been introduced in Alabama, Colorado, Florida Georgia, Iowa, Idaho Kentucky, Missouri, Mississippi, Ohio, Oklahoma, South Carolina, South Dakota, Tennessee, and Utah, according to the American Civil Liberties Union. In Russia and other repressive nations, it is far worse for trans-identifying persons. We have a long way to go.

While some Americans have become somewhat more accepting of transgender- and non-binary identifying persons, nonetheless fully one-quarter say their views are more opposed compared to five years ago, according to a Public Religion Research Institute poll.

Clearly, many Americans, on a very personal level, haven’t been able to process these societal changes that are appearing in greater frequency. In fact, members of the LGBTQ community should be well concerned when such fundamental research into gender identity is being used to fulfill a political agenda. Or when reputable news outlets use headlines that turn transgender identity into a biological mistake instead of what it really is, which is a naturally occurring variation.