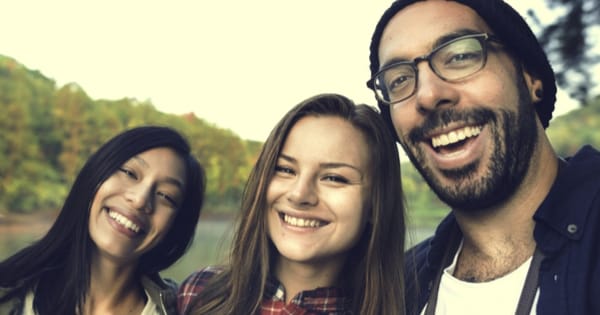 A few years ago, I was seeing this guy. He was older, seemingly very nice but made some questionable choices in regards to how he talked about women. Stupid jokes, unnecessary comments, lived in a “man cave” – you get the picture.

It was all pretty tame, but, as a blossoming feminist, it bothered me. And I wasn’t sure how much was too much or how to know for sure if we were on the same page. He knew I was a feminist – but just being with a feminist doesn’t automatically make you one too.

So, as I do, I consulted every smart lady I know, and they all said amazing things because they are amazing. But one queen of a friend led me to what I now see as my litmus test for dating a feminist (at least at heart, he may still need you for the terminology/theory/general woman feelings and you will have his back).

She asked me, “Does he have close friends that are girls? It’s always a good sign if he does.”

Though it’s simple, I had never explicitly thought of it that way. Did he have any friends that are female? The fact that I had to think about it wasn’t great.

The more I ruminated on the idea, the more it made sense. It is a really good sign if your boyfriend has friends that are girls. And if he doesn’t, you have to ask yourself why.

I don’t mean he just gets along with girls or that he’ll spend time with your friends. I also don’t mean that girls sometimes hang around his group of guy friends. And I really don’t mean that he’s friends with the girlfriends of his friends.

I mean does your boyfriend, potential date, or even f*ck buddy have close female friends that he values and chooses to be in his life?

Because this is exactly like John Waters’ famous quote, “If you go home with somebody and they don’t have books…don’t f*ck them.” If he doesn’t have female friends, it’s got to be a no. And I’ve got three levels to explain why.

On the most basic level, this means that he does not see women as merely sex objects. This is fundamental!

If he has close female friends, that means he recognizes that women are people and not vessels that make his penis feel good or are just there to validate his masculinity. Though I would hope you would be able to detect this level before becoming his girlfriend, at the very least you can check off the box if you’re already in a relationship with a guy with friends that are female. Yay!

On the second level, if your boyfriend/potential boyfriend has female friends it means that he believes women bring more than just sex to the table. I mean duh. But also it’s amazing how many men hear those words but don’t understand them in practice.

This means he thinks that female stories are interesting, their points of view should be understood and shared and that he can relate to women on a deeper level. It also signifies that he doesn’t just view women as ‘other’ or the second half of the binary.

There’s a lot of advantages here: he’s better at listening to women rather than talking over them, he gives women the space to share their thoughts and feelings and he thinks women are cool.

This is important because guess what? They are. If he’s aligned with that, then you can feel good about aligning yourself with him and his penis!

It also means he’s more likely to be interested in female narratives, which means you’ll enjoy watching women-centric shows, movies, theatre and everything together. This is super important because he’s demonstrating that he’s willing to reverse his male gaze, as we all are slowly and surely doing (even those that don’t really know it yet – LOL we’re coming for you).

The last level means that he’s not participating in this insane and toxic idea that close male and female relationships or friendships inevitably have to end in sex.

This is important because this is a big factor in why women are generally still miles behind in the professional world. (There’s obviously lots of other factors but this is part of it!) Higher up men often choose to work with other men because it just ‘seems easier’. It also contributes to why women are ostracized from male work bonding sessions, thus leaving them ‘out of the room’ and adding to why it’s so hard for women to move up the ladder.

Finally, this is why it’s so hard for men and women to just be friends because we think they can’t, which just perpetuates a negative separation between genders. Plus, it pits women against each other because they’re constantly worried that other girls are only there to steal their boyfriend.

Which they’re not. They’re also there to be good friends and people and can play more exciting roles than just the ingénue or ‘whore’.

Yay! Your boyfriend has girl friends! Now to actually embrace them
If you’re squirming at the thought of your man spending time connecting on a deep level with another girl, I hear you. Of course jealousy is a thing. It’s completely normal to feel uncomfortable seeing your man close with another woman, but that does not mean that it’s the most productive way to feel.

So here are my tactics that I live by if I’m ever twinged with these kinds of feelings. First, think about the girl. Is she cool? If you met her on the street, would you want to be her friend? If the answer is yes, then be proud that your boyfriend has good taste in people and be thrilled that you get a cool friend too.

Think about your guy friends. You love them but aren’t with them. It’s exactly the same for him and his gal friends. And how annoying would it be if you had to tiptoe around your relationships with your guy friends for your boyfriend? (And if you have to do this, then maybe talk to him about that!)

Lastly, just focus on how great it is that you have a boyfriend who values women. Because not all of the people in this world do. So you can feel good about that everyday.

Now if you’re more worried about the girl than your boyfriend, try to give her the benefit of the doubt. Remember we live in a society that forces women to be against each other. It teaches us that a woman brings along drama with her.

This is why we generally don’t believe women when they report sexual attacks: because we see women as the problem or the cause. This is not a stereotype that we need to perpetuate. So believe her when she says she’s your boyfriend’s friend, which hopefully means she’s your friend too.

And there you have it – the perfect test to see if your boyfriend is worthy of your sacred body and time!

For those keeping tabs, that older guy ended up being the complete worse. No surprises because he definitely doesn’t have close friends that are female.

But my boyfriend does. And they are really f*cking cool!

Originally Published on Her Me Out

Charlie Brook is the creator of Her Me Out, a blog that writes about our relationship culture from a feminist perspective. Big on inclusivity, she believes the only way to make change is to talk about it...with everyone. Currently living in Barcelona, Charlie works as a full-time content writer.

Facebook205TweetPin3EmailShares208
wpDiscuz
Share this ArticleLike this article? Email it to a friend!
Email sent!