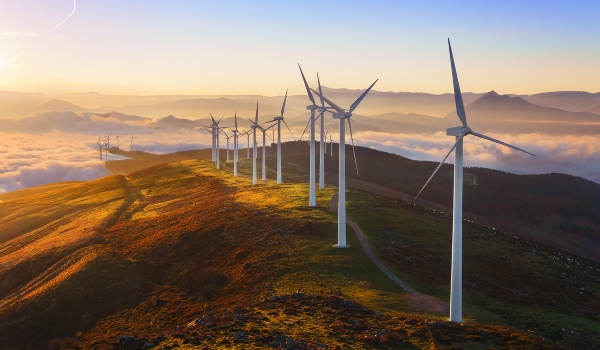 The wind blows almost everywhere, but its power to turn turbines may have been overestimated, according to US scientists.

Amanda Adams from the University of North Carolina and David Keith of Harvard suggest that large-scale wind farms may create conditions that would ultimately limit their capacity to fulfil demand.

The problem, they warn in Environmental Research Letters, is not one of economics, or engineering: it is one of atmospheric physics. When a steady wind slams into a blade and keeps it turning, it transfers energy to the blade, and thence to the turbine. That slows down the wind.

Because each turbine carries a “wind shadow” beyond it, wind farm entrepreneurs have to compromise: they need to space their turbines as far apart as possible, given that it makes sense to erect as many turbines as possible on the limited land available.

That is, output is going to depend on calculations involving both capacity and density. The usual rule of thumb is that a wind farm could sustain production rates of 2 to 4 watts per square metre. Over a square kilometre, that is 2-4 megawatts.

Adams and Keith calculate that, in wind farms bigger than 100 square kilometres, generating capacity is more likely to be limited to one watt per square metre, because of the local drag on winds. In effect, harvesting the resource also reduces the resource.

There are other problems. Wind farms change the natural wind shear and produce turbulence; they also – consistent with the logic of thermodynamics – affect local temperatures.

She and Keith based their findings on a series of simulations involving modest, medium-sized and very large notional wind farms studded with hypothetical turbines at varying intervals, in various regions of the US, and using global forecasting system final analysis data over specific 10-day periods in winter and summer to provide the wind levels.

The results showed that, for large wind farms, it would be difficult to sustain wind power production with a power density of much more than 1.2 watts per square metre.

“It is easy to mistake the term renewable with the term unlimited when discussing energy,” said Adams. “Just because you can keep generating new energy from a source does not mean you can generate energy in an unlimited amount.”

These cautious conclusions run counter to a much more hopeful scenario reported by Climate News Network in January – that, in theory at least, renewable sources could provide more than 99% of American needs.

They are also countered by some positive findings from Germany in the last few days. And the Earth Policy Institute recently reported that Iowa and South Dakota in 2012 got almost 25% of their electricity needs from wind power. Wind provided at least 10% of electricity generation in seven other states.

The US, says the institute, now has 60,000 megawatts online, enough to meet the needs of 14 million homes, and developers scrambled to complete wind farm construction before the end of 2012, to qualify for federal wind production tax credits that were scheduled to expire in December. – Climate News Network

FacebookTweetPinEmailShares125
wpDiscuz
0
0
Would love your thoughts, please comment.x
()
x
| Reply
Share this ArticleLike this article? Email it to a friend!
Email sent!