Get Daily Email
Join/Login CLOSE
Home / Advice & Confessions / Who Are the Brothers in Your Life? 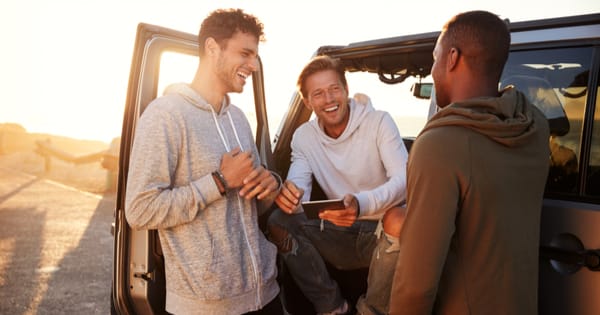 Before I get into the meat of this article, I want to tell you about a couple of guys I met not too long ago. I needed a little time to decompress after work a couple Sundays ago. It was a frustrating day where the sales were slow to non-existent.

After I clocked out, I headed to a little Italian restaurant/pizzeria in White Plains, NY, which is only about ten minutes from me. I needed a beer and some pizza. Y’know, guy food.

This was also the day that Auburn University – my alma mater’s most hated rival – advanced to their very first Final Four. And I didn’t hate it. Honestly, y’all…I felt like I needed to wash away some sins. As if I could feel the disappointed stare from my late granddaddy…

I sat at the bar and while I was there, I met these guys. They were both White Plains firefighters and complete “guy’s guys.”

Let’s call these guys Frank and Tony (because those were their names.) When Frank had to leave, the two friends did something that really touched me.

They gave each other a big hug and left each other with a “I love you, brother.”

Platonic, brotherly love is one of the most underrated and overlooked parts of men’s culture. And I would assert, this is something we all need more of.

Speaking of my late granddaddy, I’ve written about him in this space several times before. Melborn Ivey was a Purple Heart recipient, and a highly successful man in real estate and agriculture, as well as the main reason why I’m a writer today.

Ask me about the legend of Monkeytown…I love sharing this story.

My granddaddy was a highly-successful white man at the peak of his power and wealth in the Deep South during the peak of the Jim Crow era. And one of his best friends was an uneducated black man who worked for him.

Hosea came to work for Melborn when he was 14. And by the time my grandfather passed away in 1992, Hosea was the manager of over a thousand acres of corn, cotton, and peanuts, to say nothing of their registered herd of prize-winning Angus cattle. And when my grandfather was honored with a National Farm of Distinction in 1987, Hosea and his late wife Mable were there on the dais. Right along with my Mom and my late Uncle Ed.

My grandfather caught a lot of grief for his relationship with Hosea (as you can imagine.) But he loved him as a brother and would defend him to the hilt.

I’ve also been single since Obama had dark hair.

“Reckon one has to do with the other?” King Ryan asks sheepishly.

The circle is getting bigger, but for the longest time, that circle was a dot.

I think at the depth of my being; I didn’t trust the men in my life. I couldn’t trust that I wouldn’t be made fun of. This was because most of my bullies growing up were boys.

I couldn’t trust that I’d be safe.

It wasn’t until I joined Accomplishment Coaching – the coaching and transformation program I’ve spoken about many, many, many, many times in this space – where my circle of guy friends started to grow.

On my team of 18, my first friend and real connection was my friend Emily. I mean, we started a short-lived podcast together. She and I were an unlikely pairing anyway, but I digress.

But during the program year, and subsequently, afterward, I’ve become quite close with two men from my team who I’ve grown to see as brothers.

Ian is built like a middle linebacker. And truthfully, he intimidated me at first…y’know, not unlike a middle linebacker. But at his heart, he’s the most laid-back and easy-going island cat you’ll ever meet. Since we’ve been friends, I’ve seen him become a father and strengthen numerous relationships in his life. Even though I have yet to meet his daughter, I see her as a niece. And God willing, I’ll darken the doors of his Cayman Island home very soon.

I have yet to meet anyone who Alex doesn’t know. He’s got to be the most well-connected human being I’ve ever met. At first, he struck me as the anti-Ryan – outgoing, gregarious, and popular. But over two years of weekly phone calls, we’ve become quite close and I see him like a brother. Even though he drives crazy and pisses me off (y’know, like most younger brothers), he’s my brother. I’ve seen him meet and fall in love with a really remarkable woman. And Good Lord willing, I’ll be at his wedding in a few months. I was also at his engagement party last August.

This past weekend, I took a drive from Westchester County to Queens. And when I got there, I was met with love, brotherhood, an incredible meal, and baby’s first acupuncture session.

Parks, Steve (I actually have a friend named Steve now) and I met at our friend Fred’s home. We have been getting together like this for almost a year after we all met at the Writer’s Hotel conference last June. We spoke about our writing and geopolitics. We enjoyed an incredible meal from Fred and his lady and drank some terrific wine.

And I’d been complaining for a while about tension at the top of my neck. What with all the drama with my living situation, financial situation, preparing for two different workshops, looking for a full-time job, and with a sister fighting cancer 900 miles away.

Fred’s lady just happens to be an acupuncturist in NYC, and I got a session from her. It was a bizarre experience, but one that truly helped the tension and pain in my neck.

I will be visiting her for a follow up as soon as I’m able.

Here’s my point in sharing all this.

We all need that brotherly love in our lives.

We all need brothers in our lives.