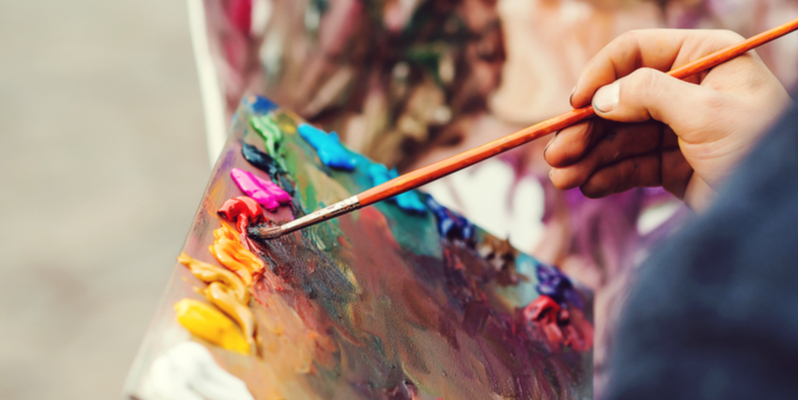 When generations of your family have been in the military, there is a pressure to do the same. I was the black sheep that went to art college.

I grew up in a military family. At least I think I did. I wonder how people would define it. My father was in the Navy, and eventually retired as a Commander. He was deployed in the Falklands War, and was also in the first Gulf War. When he was home the discussion around the dinner table would often be about adventure and derring do.

The language of the military would influence how we communicated. Dinner was at eighteen hundred hours, and as a teenager I could quote Blackadder, especially when he went Forth. It was fun, but expected.

My two younger brothers would later join the Royal Marines. My grandfather was in the Army, as was my great grandfather. My aunt, joined the Army as well. My Uncle was in the Navy, and my great, great, grandfather served in all three battles in the Crimean War.

Our home had medals, and photos, and paraphernalia of the military all around. It did influence me, but not quite enough to join up. I was probably too scared.

But I loved the idea of the military, and I loved war films. It started with Star Wars, when I was 7 years old. The nobility of standing up to an overwhelming force. Later I would watch a ton of movies about brotherhood, sacrifice, and good vs evil.

Anything from Kelly Heroes, and Zulu, to Navy Seals.

And I fell in love with, film. (Well not Navy Seals)

This led me to study film and media. I went to Art College. I did a degree, a Masters, and then moved in to teaching. I made films and taught storytelling, audience theory, and critical thinking.

My family is in Plymouth, on the south coast of England, and I moved to the north, to Carlisle, by the border with Scotland.

I got as far away as possible. I felt like a black sheep.

But black sheep is a label. It is a border and boundary we create as human beings that doesn’t really exist. It is created by a lack of communication.

Decades later I would find that my family and I had far more in common than I would have possibly thought.

Do you want to know what artists and the military have in common? They want to influence the world, and make it a better place.

Whenever I was teaching I would encourage my students to think about the impact they wanted to have in the world. How were they going to persuade their audience to feel something new? Or act in a different way?

Persuasion is the keyword, and it is similar in the military. As is morale and wellbeing.

Over time my family and I would share the same books, and podcasts. We would talk about psychology, management of ego, and the different methods to achieve productivity, motivation, and wellbeing.

We would talk about stepping out of our comfort zones, world politics, and the social and political changes that were sweeping the globe.

The military has incredible bands, and study the words of Churchill, JFK, and Robert Burns. The military is riddled with artists, relying on effective communication perhaps more than any other industry.

It might even be “art” that gets people to join the military in the first place.

The label “black sheep of the family” is just that. A label. Humans have far more in common than they think, and yet focus on what makes them different.

Military personnel will speak of brothers and sisters in arms. As though it is a closed group that excludes those that have not had those experiences. But the truth is that we are all part of the same family. We feel the same fears, the same hopes, the same emotions. The path we take may be different, but the destination is often the same.

Doing something “new” or different doesn’t make you a black sheep. It makes you a pioneer. Someone who can take a new view point back to your family, and find that you actually have far more in common than you think.