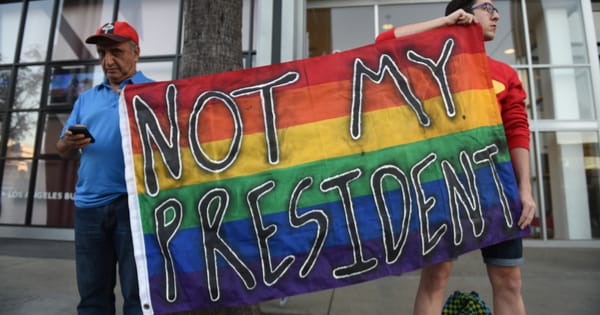 Today is Presidents’ Day. Originally created as a day to honor President George Washington, it is now more broadly a day to commemorate past presidents—or to sell mattresses and enjoy a day off from school, or so it seems. This day is troubling, however, as it is a reminder that we are supposed to hold the president in high regard. That is increasingly difficult with the current president. Donald Trump is, for many, not an admirable president nor an admirable man. In the context of gender issues, it is hard to argue that Trump is anything but divisive and dangerous.

The president himself has been accused of sexual misconduct by 22 women ranging from ogling to harassment to groping to rape. During his campaign, an “Access Hollywood” tape was released in which Trump boasted about grabbing women’s genitals. During the presidential debates, Trump made derogatory and sexist comments toward his opponent, Hillary Clinton, and female reporters.

One of Trump’s first moves upon taking office was to reinstate the Global Gag Rule, which withholds federal funds from organizations that even discuss abortion as an option. The Gag Rule was previously in effect between 2001 and 2008, and during that time women’s access to contraceptives decreased, the rate of unsafe abortions increased, and HIV prevention programs were significantly scaled back.

He backed Brett Kavanaugh for Supreme Court justice despite claims of sexual misconduct. Trump backed Rob Porter, the White House aide who was forced to resign after it became public knowledge that two of his ex-wives had accused him of abuse. Although he was not elected, Trump threw his weight behind Roy Moore, the Republican candidate for U.S. Senate in Alabama who had been accused of engaging in inappropriate contact with a 14-year-old girl, among other violations.

Trump was the first sitting president to address the anti-abortion March for Life. The administration’s removal of asylum status for victims of domestic violence may be deadly for women seeking to flee abusers. His family separation policy has ripped children from their mothers and forced pregnant women to sleep on floors. Trump himself has repeatedly mocked the #MeToo movement.

The list here is far from exhaustive and doesn’t even get into the Trump administration’s anti-transgender policies.

The president’s behavior obviously influences others and is yet another way that misogyny is normalized. The national gift-store chain Spencer’s was selling a “Grab America by the Pussy” t-shirt. In the days after the election, the Southern Poverty Law Center documented several incidences of young boys parroting Trump while harassing girls.

While young people are out of school to commemorate the day on February 18, perhaps we’d all be wise to talk with them about the president’s sexism, sexist policies, and what they mean for us as a country.