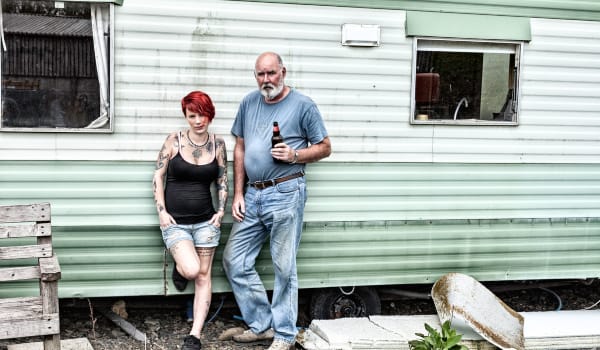 Have you ever lived in a mobile home? Not me. Until the age of 24, I had never set foot in one. But two years later, I’d been inside hundreds. My first job out of college was to work with mobile home owners who rented their home sites in private parks around New England. The goal was to help them organize and buy their parks as resident-owned cooperatives.

On an April day in 1986, I was sitting at the kitchen table of a spacious double-wide owned by Harlan and Mary Parro in Bernardston, a small town in Western Massachusetts. We were joined by seven other leaders from their thirty-unit park.

At 26, I still had distressing facial acne that made me feel quite self-conscious. People regularly assumed I was 17 years old, which compounded my insecurity in situations like this one. The tenant group leaders were all looking at me—this kid with bad skin—waiting to hear my assessment about the fate of their mobile home park.

They were understandably anxious. An unknown buyer had made an offer to purchase their park from its current owner. Some buyers around the region were jacking up rents, knowing the residents were basically hostages. And with land values rising, some developers were buying up parks, kicking out the mobile homes, and building subdivisions and condominiums.

Thanks to a state tenant protection law, the Bernardston tenants had forty-five days to match the offer and buy the park themselves. The clock was ticking.

One of the first things I learned on the job is that mobile homes are not so mobile. Moving a home can risk damaging it and diminishing its value. And it presumes you have a piece of land or another park to relocate to. Across New England, local towns were passing snob zoning laws to prohibit new mobile homes.

Equally important, people in mobile home parks put down roots and build tight-knit communities. They construct additions, add carports and garages, put skirts around the base of their homes, landscape and plant trees and gardens. Harlan and Mary proudly showed me the day’s vegetable harvest from their garden plot. All this would be wiped out if the park sold and closed, scattering the residents.

I was in agony, sitting at that kitchen table.

You see, I knew all their secrets. I had confidentially surveyed every member of the community about their personal finances. I knew how much each of them could pay toward rent (and a future mortgage) and how much savings they could apply toward the purchase of their share price in the cooperative. If enough residents could buy their shares outright, we would have the estimated $150,000 required for a down payment.

From my survey, I knew that a third of the residents had no savings and barely enough income to pay current rents. Most residents had low-wage jobs or were living on Social Security. Only a dozen had any savings of more than $5,000, including the retirees. These were people with very low incomes with little to fall back on.

Because I had determined that they didn’t have the money to buy the park, I was distraught. In my analysis, they were about $35,000 short of what the association needed for the down payment, a sizeable sum. I was going to have to break them the bad news.

I was also in agony, however, because I had a secret. I was wealthy. I was born on third base, having inherited a substantial sum a few years earlier.

I could write a check for $35,000 and make it possible for these thirty families to buy the park. And I was seriously thinking about doing just that. Contributing $35,000 would have had a negligible impact on my personal finances.

I broke the bad news to the assembled leaders. There was a quiet pall in the room. And then an extraordinary thing happened.

First, one of the residents named Reggie said he could buy his share and put another $5,000 toward the purchase. Now I happened to know, because of my confidential survey, that this was all the money that Reggie had.

Then a retired couple, Donald and Rita, pledged an additional $8,000. Ms. Dundorf would put in $7,000. Again, I knew that this was all the money they had.

Harlan and Mary said they would buy their full share and put in another $15,000. This was their entire nest egg, saved while Harlan had worked at Greenfield Tap and Die for thirty-five years. “We’d like to buy Ms. Rivas’ share on the condition that she must never find out, in order to protect her dignity,” Harlan said.

The group cheered and immediately started writing out personal checks and handing them to me to take to the bank and deposit.

I was physically shaken by what I had seen. These people were all in. They were willing to risk everything they had to buy this park. I wiped away tears as I drove to the bank.

And they succeeded. They bought the park. On the day of the closing, all the men had cigars like proud parents. Harlan told the local newspaper, “We are hostages no more. We bought the land from Pharaoh.”

Mary approached me after the closing to thank me for my work. “You’re a smart young man, you could get a job on Wall Street. You don’t need to hang around with a bunch of old fogies like us.”

Then Mary leaned confidentially toward me and whispered, “Have you ever tried Noxema? You know, for your skin.”

The Bernardston tenants—now owners—had taught me something about solidarity, about the power of community.

I did not have to write a check that day. But sitting there had opened the door to a thinking process. Why not? What would happen if I gave the money away to meet some of the urgent needs around me? I was beginning to understand the rather remarkable privileges that had flowed my way.

At the age of 26, I had three or four times as much money as all the residents of the Bernardston mobile home park combined. There is no rationale I could find that could justify this disparity.

So I decided to give away the wealth. I wrote my parents a letter thanking them for the tremendous opportunities this wealth made possible. And I explained that while having the money was a boost in helping pay for my education, it was now a barrier to my making my own way in the world. I intended to “pass the wealth on.”

My father immediately called me when he got the letter. He flew out from Michigan to Massachusetts to meet with me. We talked for a day, and during that time he asked me a dozen what-if questions. “You’re young and single. But over the course of a lifetime, bad things can happen,” he said. “What if you get married and your spouse becomes ill? Wouldn’t this money make life easier? What if you have a child and that child has a special need, wouldn’t you wish you had this money?”

I had thought about many of these scenarios and more. And my response to my father was, “Well, then I would be in the same boat as 99 percent of the people I know, and I would have to ask for help.”

“Without this money, you might have to fall back on the government,” my father warned. “And that’s a terrible system.”

“Well, then I’ll have a stake in making that system better,” I replied.

“That’s pretty idealistic,” said my father. But after a day of walking and talking, he was reassured that I had not been possessed by an alien cult.

A few months later I drove to the National Bank of Detroit and signed the paperwork to transfer all the funds in my name to four grant-making foundations.

My trustee at the bank was an African-American woman named Glenda who I’d had very little contact with. We talked briefly about my decision. She looked at me at one point and said, “Are you going to be alright?”

“Yeah, I think I’m going to be alright.” I replied. But I didn’t know for sure.

Nor did I fully understand the tall mountain of privilege I still had. I was a white college-educated male in the United States, with a debt-free education and an extended family and social network. At the time, it felt like I was taking a leap of faith. I had my father’s what-if questions in my head, and an awareness of the fragility of life.

A few months later, something bad did happen. The top floor of the house I was living in burned down. No one was injured, but I lost everything I owned. What wasn’t burned was destroyed by the hundreds of gallons of water that had been dumped into the house.

The next morning, the sun came out and shined down on the sooty mess that was our house. My housemate Greg was sifting through piles, recovering little fragments of photographs.

Four cars pulled up to our house. Out climbed a dozen people from the Bernardston mobile home park. They had casseroles and shovels and trash bags. They had come to help.

At that moment, I thought, “I’m going to be okay.”

—
This post was previously published on OnTheCommons and is republished here with a Creative Commons license.
—

END_OF_DOCUMENT_TOKEN_TO_BE_REPLACED

Facebook28Tweet2Pin1EmailShares31
wpDiscuz
Share this ArticleLike this article? Email it to a friend!
Email sent!