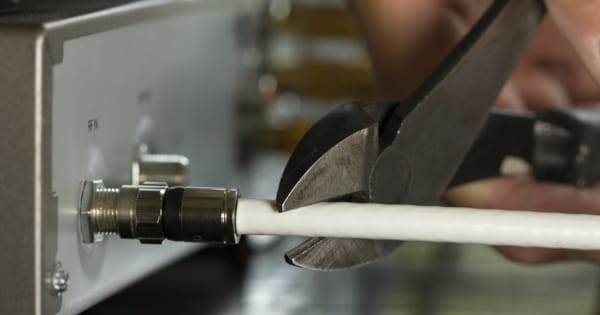 —
When we first cut the cable, back in the fall of 2012, it was an unusual decision. These days, however, it is much more common. According to “The Rapid Decline of Cable TV” by Dennis Restauro, Nielsen reported more than 9 million households cut their cable in the 5 years from 2013–2018.

Cable TV is undoubtedly going the way of landline phones.

For us, cutting cable was a conscious decision to not only cut costs, but also cultivate better watching habits.

When we moved into our new house, nearly seven years ago, we decided not to get cable or satellite TV service installed. Having already cut our landline phone back in 2005, it was easy to say no to the bundle and, instead, opt to only have internet service.

At that time, we had nothing more than a Netflix subscription and our collection of DVDs — an arrangement that sustained us for years.

More recently, we’ve tried other services. The options are incredible and ever-expanding these days. With your smart TV, a Roku, or another device, you can stream endless options from Netflix, Hulu, and countless channels which host their own apps for streaming. Even Disney is launching its own new streaming service later this year.

It is obvious streaming is the way of the future — and for good reason.

We have never once thought about going back to cable. In fact, cutting cable has been beneficial in many ways — both expected and unexpected.

People used to feel the need to clear their schedules to be home when their favorite shows aired — some still do. We only watched a couple shows we felt compelled to do this for, but it was an annoyance. Run late getting home, have a commitment at air time, even simply take too long in the bathroom and you missed part of your favorite show until it re-aired. Back when we cut cable, DVRs were gaining in popularity to combat this issue — yet even those had limitations: it could reach full capacity, unwatched shows could be mistakenly deleted, it could be misprogrammed and record the wrong thing. We never wanted to add another device and expense, either. We decided to give up those shows and move to streaming services where we could control when we started a show, paused, or rewound it. These days, you might not even need to give up your shows, with so many more streaming options available.

When we had cable TV, we often let the TV shows keep rolling on — the show we were watching would end and we’d mindlessly watch whatever came on next. This often happened because, if we’d try to find something else to watch after one show ended, we’d be flipping through channels aimlessly for twenty minutes and end up having to jump into a show that had already started. But, by just allowing the TV shows to roll one-into-the-next, we’d find ourselves hours later in the middle of a show neither of us really cared for, wondering why we had wasted our whole night. With streaming services, we are much more intentional about what we chose to spend our time watching and we no longer have to jump into a show after missing the first twenty minutes.

Or at least fewer commercials. For the first few years, we only had Netflix, which has no commercials. Our kids were young when we cut the cable and, as a result, they hardly ever saw any commercials — which meant they hardly ever wanted the next latest fad toy being constantly advertised. No commercials also meant shows that’d take an hour to watch on cable only took 40 minutes to stream. Now, some of the other streaming services we’ve used do have commercials but they still tend to be fewer and less often than on cable.

Thanks to those first three points — no can’t-miss-appointments, no mindlessly watching show-after-show, less time wasted on commercials — we watch much less TV than we once did. We are no longer sucked into an evening TV routine that often ended up running late into the night. Now, we watch an episode of a show and there is a clear ending and a choice to start the next episode. We look at how long a movie is before we start it and figure out how late it will be when it ends. These days, we get to bed by our desired time almost every night.

5) Paying only for what we watch.

With cable, we paid for dozens of channels we never watched and many more we only watched for one show which aired new episodes for one season a year. Now, we can choose à la carte. We only pay for a service when we are using it and easily cancel it when we are not. A general standby like Netflix or Hulu can be paired with a sports streaming service during football season or a premium channel when your favorite show starts back up. For example, we currently have Hulu and HBO NOW for the final season of Game of Thrones. We canceled Netflix when we added in HBO. When Game of Thrones ends, we’ll cancel HBO. When our promotional rate ends for Hulu, we’ll likely cancel, but we will definitely try Disney’s new service when it launches. It is extremely flexible.

Perhaps the most compelling reason to cut the cable is how much money it saves! Obviously, this will vary depending on how much you currently spend on cable and how many paid streaming services you end up subscribing to. For us, we pay $50 a month for our internet service (which we would have regardless of if we had cable or not, but it is essential to streaming) and we currently pay $0.99 a month for Hulu (a one year promotional rate we got last Black Friday) and $15 a month for HBO NOW (which we will only keep through the final season of Game of Thrones). Often, the only streaming service we were paying for was Netflix at $9 a month.

Our Roku (one-time device purchase of $60 made years ago) also offers access to apps for streaming a selection of programming free of charge — stations such as PBS, The CW, and Pokémon TV offer some of their episodes free for a limited time. And, depending on the weather and reception, we can also pick up broadcast channels with our TV’s digital antenna. Overall, we’ve always had plenty of viewing options for anywhere from $9 to $16 a month for streaming services, plus $50 a month for internet. A low-end cable and internet bundle would run us about $120 a month. So, we are easily saving over $645 a year!

A cable-free lifestyle may still sound intimidating to some, but it is becoming more and more common every year. If you are on the fence, give it a try — you can always go back, but maybe you’ll also find that you, too, don’t miss it at all!
—

Don’t like ads? Become a supporter and enjoy The Good Men Project ad free
Do you want to be part of creating a kinder, more inclusive society?

Elizabeth Joyce is an essayist, poet, and author. Her new book, tumbling: poetic thoughts from an anxious mind is available now!

In her eclectic collection of online and print works, Elizabeth shares her truths as a cancer survivor, mom via IVF/FET & gestational surrogacy, anxiety struggler, family historian, budget traveler, and simple, ordinary life enthusiast. She lives in Illinois with her husband, son, and twin daughters.

Sign-up for her quarterly newsletter and find out more at about.me/WriterElizabethJoyce.

Facebook62Tweet1PinEmailShares63
wpDiscuz
Share this ArticleLike this article? Email it to a friend!
Email sent!