Get Daily Email
Join/Login CLOSE
Home / A&E / Book review: ‘As Sure as Tomorrow Comes’ by Danielle and Christopher Jones

It has a way of showing the naked eye things it needs to be shown, but sometimes they’re the very things that the soul doesn’t want to accept as reality. So, they’re often ignored or pushed down so far into one’s gut that those things become numb. That’s the moment when a decision has to be made: Is it safe – or even wise to let that ball of emotion linger and potentially get bigger over time?

Regardless of how one responds to this question, it is human nature to put its impact at the forefront. It’s human nature to want to make the best possible choice for oneself and those around them – even if it takes a long time to make that choice. By the same token, one has to know deep down that whichever road they choose, the obstacles that lie ahead are now theirs. The way in which those obstacles are handled will in turn ripple through the lives of the individuals who mean the most – and perhaps do the same in others’ lives. Whether or not the outcome is a positive one is up to those who are struggling. 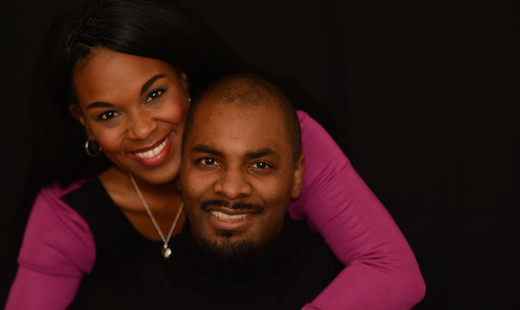 In their new book, “As Sure as Tomorrow Comes”, married couple Danielle and Christopher Jones share what transpired when they chose light and love in the face of unexpected pain and tragedy during their first few years of marriage. Together, they’ve worked through the pain of unemployment, a diagnosis of multiple sclerosis, a cancer scare, the loss of a loved one and the devastating death of their ten-day old son, Christopher Louis Jones, Jr.

The couple tells their story with a refreshing and inspiring perspective on grace and humility, in hopes that their journey might provide readers who may have hit rock bottom with a message of hope – and give them the spark they need to move forward with their lives. Most importantly, Danielle and Christopher tell this heartbreaking, yet uplifting story to let every broken or lost soul who reads this book know that they can fight through any situation – and win. The book starts where every healthy relationship should begin, as Danielle brings readers into the beginning of her life with Christopher. It starts out just like an ordinary day: Danielle and Christopher make their way into an Italian restaurant to enjoy a meal together.

Then, at the end of that night, she told him how much she enjoyed spending time with him. It’s an innocent, beautiful introduction that leads to a less-than-grandiose marriage proposal. As Danielle beautifully articulates, however, she didn’t care if the proposal was a big, fancy undertaking. She loved Christopher whether he was rich or poor, as his employment began to crumble – and that would prove to be more than enough for both of them.

It is that same love and faithfulness which glows in the pages of this book. It’s the kind of love that endures through the worst of weather, and the kind of faith that never wavers, even when the soul is drowning in a sea of uncertainty and despair with no end in sight. Whether or not it was intended, this open and honest approach allows the reader to peel back the layers and see that the Jones put a lot of thought and heart into just the title of the book alone – and did so for good reason.

Not only that, but the Jones’s have chosen their words in a way that, when read silently or out loud, makes the reader feel as if they’re talking directly to them. That simple tactic brings home the notion that it is humanly possible for one to be satisfied with themselves as well as the choices they make along the way – if they foster a healthy attitude.

The fact that Christopher and Danielle chose to take a very intimate, human approach with readers is a testament to their willingness to be a powerful, purposeful voice in this world. It’s also the appropriate approach and essential for a story of this magnitude, as emotionally difficult as it may have been to execute. If this story were told any other way, it perhaps wouldn’t be one that stays in the mind, body and soul long after it’s read.

If anything, “As Sure as Tomorrow Comes” is a beautiful message of hope, faith and resilience. It’s not only a call to the human heart to do what one can when their back is against the wall, but to also learn how to turn a negative situation into a positive experience for oneself as well as those affected by it. Each page is a step in Christopher and Danielle Jones’s journey – a journey that reminds every reader they’re human and can always choose to do good – no matter how hard the curveballs of life may hit.

Facebook122TweetPinEmailShares122
wpDiscuz
Share this ArticleLike this article? Email it to a friend!
Email sent!