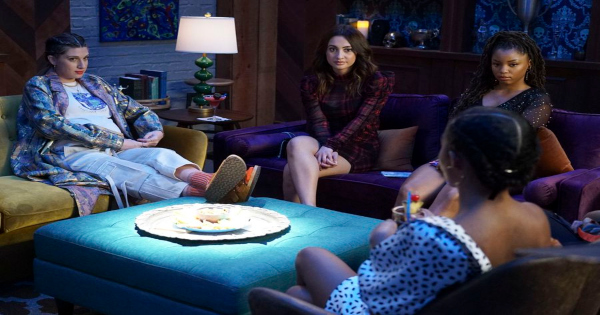 Last time on Grown-ish, Zoey was feeling great. She returned home from a great summer working her dream job. When she gets to her new home, a big celebration was waiting for her. Yet she did have a few things to deal with. Seeing Luca was awkward, and she had to talk to Aaron about something. As this episode came to a close a friend arrived, and brought an unexpected surprise with them. Now this crew tries to deal with it in ‘Damn’. I was able to watch a screener of this episode and here is what I thought of it.

You can read the premise for ‘Damn’ here:

The crew tries their best to cope with a shocking surprise, but another unexpected bomb sends Zoey into a spiral.

This crew is definitely taken a bit by surprise by Nomi in ‘Damn’. She came back sporting something none of them expected to see. Zoey wants to be cool about it, but when she finds out Nomi told someone else before her, she doesn’t handle it that well. A chat with some of Zoey’s close friends helps her realize she may have some things to work on though. As this episode comes to a close she apologizes to Nomi, and does her best to be the type of friend she needs right now. To learn more about Grown-ish, click on this website.