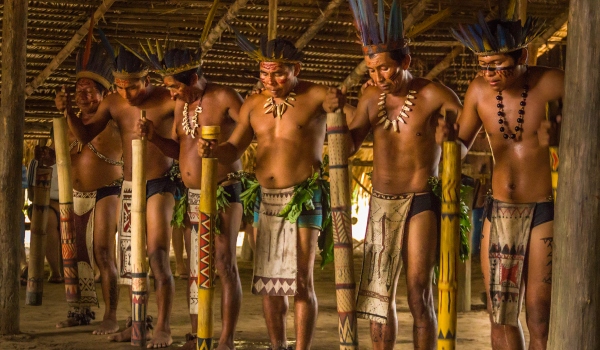 I came across a piece in the North Shore News last week on The Edward Curtis Project. It’s a multi-disciplinary theatre performance and photographic exhibit by Métis/Dene playwright Marie Clements and photojournalist Rita Leistner, to be premiered at the 2010 Cultural Olympiad and the PuSh International Performing Arts Festival later this month. Sadly I won’t be flying over to Vancouver to see the production, but I was struck by the enduring interest in, diverse opinions on, and responses to Curtis’s own project – that extraordinary, collaborative endeavour to document Indian cultures, which resulted in the 20 volumes of ethnographic text and photographs, and 20 portfolios of photogravures, published between 1907 and 1930, which make up The North American Indian. The project was supported by Theodore Roosevelt and part-funded by J. Pierpont Morgan. And it was thanks to the latter, and then, after his death, his son, that the Library received a full set of the publication.

I also read not too long ago about work at Rutgers to restore Curtis’s 1914 silent film In the land of the head hunters, which features Kwakwaka’wakw (Kwakiutl) communities in British Columbia, and this project has also spawned numerous performances, events and conferences.

The entire contents of The North American Indian have been digitised by Northwestern and can be viewed online. The images are also available via the Library of Congress’s American Memory website, where you will also find a useful special presentation Edward S. Curtis in context. But there’s nothing like seeing the real thing, and a photogravure from one of the portfolios is featured in our Points of View exhibition. It is a portrait of Bear’s Belly (Arikara), who was born in 1847 in Fort Clark (in present day North Dakota). And speaking of a warrior of the plains, I’m reminded that the BM’s new exhibition Warriors of the Plains: 200 years of Native North American honour and ritual opens on Thursday.