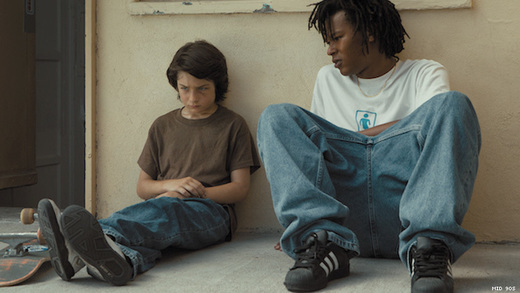 It’s a painful and transformational moment in the film at a point when Stevie (played by actor Sunny Suljic) still idolizes Ruben (played by actor and co-writer Gio Galicia) so much that his perceived rejection by the older boy is seen as an assault.

Mid90s is easily among the best American teen movies ever. It’s so sublimely well executed that it even feels vintage. The story feels personal and according to Hill it is but it’s not autobiographical “It’s a story I wanted to tell. I grew up skateboarding in LA in the mid-nineties.”

The movie has a lot to say about a lot of things but at its core is about the kind of love we have for our boyhood friends that’s often not spoken of especially in the mid 1990s.

It’s loaded with moments of what we’d call toxic masculinity today, but having lived through the time there’s a honesty and authenticity to the love and bonds formed by boys in the skate and hip hop milieu that defies categorization.

The n-word and f-word are thrown around liberally and may trigger certain people but in the words of Dave Chappelle stop “being bitch ass n****s” and listen: the paucity of words and even the words themselves are all intentional even if they feel improvised. Hill takes the suggestion of the dialogue being improvised as a compliment but insists every word is heavy with subtext and meaning.

The movie authentically represents the subculture of skateboarders in the mid-1990s by more than using “skate cult” shortcuts. It documents a period when Jonah Hill was a self-described not-great skateboarder but hung out with a group of much better skateboarders. Drawing on Hill’s memories the film is told from the point of view of a boy, much like Hill, who didn’t really fit in any where else, who wants to be a skateboarder and be accepted by the older skaters he admires, who takes life-threatening risks with skate tricks and stunts and spends the rest of their time smoking, drinking and trash-talking.

The skaters are played by pros, but the skaters they play are unlikely to get anywhere.

They have no money, no connections. 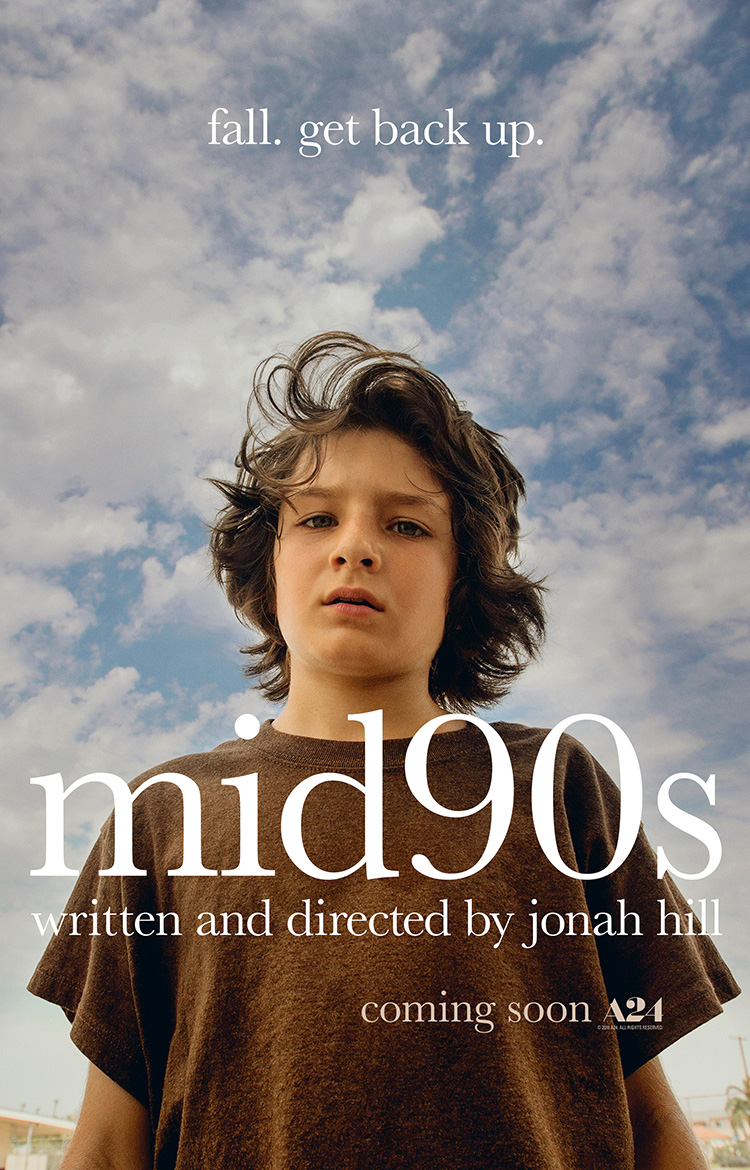 Virtually every critic has pointed to the films parallels to director Larry Clark’s 1995 film Kids and Hill is quick to credit its influence; with the caveat that having re-watched it recently he realizes that watching it as a teen the HIV angle totally went over his head at the time.

Personally I think Hill gives Clark’s Kids too much credit. Kids even when I saw it as a teenager felt voyeuristic and sexually exploitative using HIV as a bludgeon for bad behavior among kids in 90s. Clark likes to call it “A Wake Up Call” presumably because he’d crafted the ultimate fear campaign for parents: a nihilistic HIV-positive boy named Telly who tells his friend Casper that he has taken to only having sex with virgins.

Kids got a lot attention and generated massive controversy over it’s depiction of sex and heavy drug use that Clark shot  to look cinéma vérité but was in retrospect a hackneyed attempt to intentionally outrage and one that also suggested that this milieu was what comprised skate culture which didn’t ring true.

Clark’s “great American Teen Movie”  it was not.

The other thing that Hill gets right that Clark couldn’t possibly see is the intersection of hip-hop and skate culture both of whose peaks in the 1990s dovetailed. Hill brings this home towards the end of the film when the music (composed by Trent Reznor and Atticus Ross) dubbed “The Night Everything Changed” by GZA from Liquid Swords dictates the visual narrative —and is as part of the films DNA just as a cameo by Del The Funky Homosapien as a wise junky works on its own but works on a dual level if you get the reference.

The gay thank you remark is one of many moments of emotional dysfunction that translates into pure love for boys bereft of the language they need. A group of friends who obviously love each other and form an ersatz family but lack the ability to express that love in anything but a constant one up-ness in skating or dissing each other.

It’s one of the many moments Hill sets up and executes flawlessly and why the film reverberates on so many levels.

Mid90s is in theaters now.

This was previously published on Chill magazine. Reprinted with permission of the author.

Photos courtesy of A24 Films.