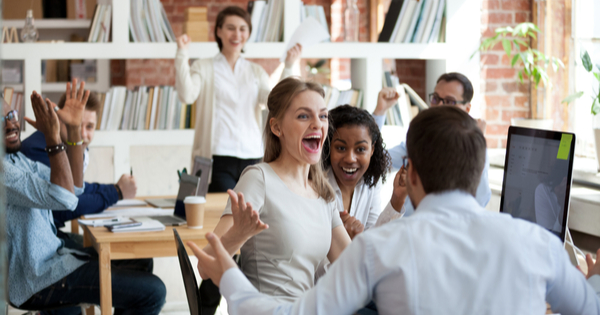 Since 2000, Gallup has tracked employee engagement in the American workplace. In 2018, we hit an all-time high – 34%. I know what you’re thinking – that’s not exactly a high number. Truth be told, for the last 18 years, we’ve averaged 30% engagement. That means on our 10-man team, 3 people actually care, and some days, 1 other person will make some copies. On the other end of those numbers, this means that about 70% of our organization at best, doesn’t care about the work they do, and at worst, are out to sabotage everyone else.

Billions of dollars have been spent over those last couple of decades trying to attack this problem. We’ve seen companies try all kinds of different tactics to curb this issue. Team-building exercises, weekend retreats, office parties, and even extended vacations have almost become the norm, but there still doesn’t seem to be much change. I believe the reason we haven’t seen much change is that all these tactics are putting a Band-Aid on a broken leg.

All these commonly used employee engagement tactics are just that – a short term tactic. A Friday retreat for the staff that includes pizza, wings, and games might be a great team-building exercise, but that doesn’t automatically translate to more engagement on Monday morning. Giving an employee an extra week of paid vacation each year will surely please them, but it doesn’t mean they’ll work harder on the next project. The problem isn’t the retreats or team-building exercise, it’s how we fail to apply the principles of those exercises back at the office.

The whole idea of any of these campaigns is to leave employees feeling so in love with the company, we happily go the extra mile, which drives increased profits. What actually happens in most cases, is that employees enjoy the free food or extra time off and are thankful, but after a few days back in the office routine, that memory fades. As the hustle and bustle of our busy workday take hold, we tend to fall back into the mindset of, “it’s just business.” This is the mindset that sacrifices the human component of an organization for the benefit of numbers or deadlines. All this happens because we’re trying to use external stimuli to fuel an internal drive.

Humans have evolved on this earth for over 200,000 years, and with relative ease, have become the most dominant species on the planet. This is largely due to a single adaptation we possess over other animals – a highly developed limbic brain. Our limbic brain is what produces our emotions, and controls our decision making, long-term memory, and rational thought process. It’s what drove our ancestors to form small communities for the benefit of shared food and protection. It’s also what’s at the core of our current disengagement problem.

People don’t need to be taught how to be more engaged, that’s an inherent trait we all have. What we do need is to be shown why we need to be engaged. Here’s where most companies fall short.  Money doesn’t engage people emotionally – at least not for the long term. In fact, research published in Psychology Today shows that 83% of employees surveyed said recognition for their work was more fulfilling than any financial reward or gift.

We are biologically wired to seek emotional connections, and that doesn’t stop when we walk into the office. To do our best work, we need to have an emotional connection to the work we’re doing, or at the very least, the individuals we’re doing the work with. These connections are what cause people to turn down a higher paying job elsewhere to stay with the team they’re on.  These connections also spark innovation and the desire to consistently improve the current process. People who are emotionally tied to their work don’t need to be convinced to stay late to prep for tomorrow’s meeting, or enticed to work a Saturday morning for extra money. Sure they probably won’t turn down the money, but they’re showing up because they’re working for a cause larger than themselves, and that’s what emotional intelligence brings to the workplace.

Rather than focusing on retreats and off-sites to build connections, the focus needs to happen on-site where we work, in our normal daily environment. We need to stop focusing on the dangling carrot to produce short term engagement, and turn our attention to building a long-term, sustainable, emotionally intelligent workplace. This doesn’t mean the office turns into a giant therapy session, but it does mean people can be people. We don’t need to walk around and hug everyone to start the day, but we do need to ask, “How are you doing? How can I help?” and actually engage in the response. Building these emotional connections will automatically drive engagement because these connections are what our brains are programmed to search for. This is why we hear in sports, “They won that one for the coach.”  When our brains are able to find and establish these necessary emotional connections, we build an internal drive to achieve the goal. Whether it be on the sports field, building ancient civilizations, or in today’s workplace, positive emotional connections drive engagement, productivity and results.

Let’s look at some of the simplest ways to promote emotional intelligence in the workplace.

Building a workplace that is focused on emotional intelligence is the only way to correct our employee engagement problem at its core. Without that connection, engagement will last only as long as the carrot.  Eventually, a business will either spend more money on carrots, or through turnover, be back to square one. Leveraging the emotional connections that are hardwired into our brains eliminates an external stimulus, such as a team-building event, and replaces it with an internal drive, like the desire to work harder so we don’t disappoint our teammates.
—

Brenden is a writer, speaker, and business coach for professional and leadership development. His work focuses on driving increased productivity and profitability by focusing on the human side of the business rather than just the numbers.