Kenny Bodanis muses on the mixed joys of being away from one’s family.

As a working parent, one of the greatest challenges is the gear shift and balancing act required to be efficient at work, and devoted at home.

Rarely does my professional life take me on the road for very long; these past two weeks have been the exception.

The kids started school on Wednesday. For my daughter, it was her first day of kindergarten; her first steps into a big-kid school.

My son started grade two. Gone is his preschool innocence, replaced by a slighty jaded edge of a 7-year-old one year from being in the ‘senior’ yard.

After a week, he needed more than phonecalls from a Hilton.

Although my wife will be joining me for the last week of my trip, preparing for her vacation adds to her already considerable workload. Groceries must be bought and meals must be planned for the week we’re both away. She’s attempting to make the house a little more Mary Poppins, a little less Dorothy-leaving-Kansas.

Babysitting will be shared among family members. Each person must be made aware of emergency pĥone numbers, school and after-school activity schedules, lunch menus, and homework routines.
It’s becoming a question of whether her ‘vacation’ will be relaxing enough to alleviate the accumulated stress involved in preparing for it.

My hotel room and cable TV, my new colleagues in London who have become my friends, and the unparalleled inspiration of the Paralympic games are slowly having their hypnotic appeal shaken awake by my desire to be at home and contributing to my family’s life.

I know it won’t be long before we’re four to a bed again during storytime after supper. Soon after that, certain memories of my three weeks in the United Kingdom will seems years behind.
My right brain is determined this experience is worth it – once in a lifetime.
Its counterpart is a little weary, a little lonely, and feeling a little helpless.

Some parents travel regularly. I guess their family routines are as well organized as their carry-on luggage.
I’m not sure I could do this regularly.
Absence makes the heart grow fonder. But not far beyond that, it’s just chest pains. 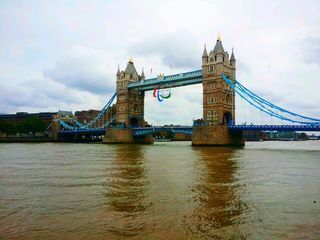 Photo—Big Ben and parliament from Shutterstock