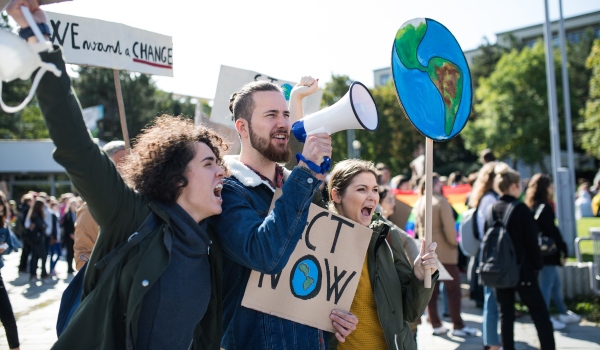 After almost three months of continuous protests and sit-ins staged by activists in a battle to save Mashtots Park, the Armenian President, Serzh Sargsyan, ordered the removal of structures already constructed on the basis that they weren’t aesthetically appealing, a reason that wasn’t on the agenda of those fighting against illegal construction in one of Yerevan’s last remaining green spaces.

In addition to their demands to preserve the park for health and environmental reasons, protesters objected to the ’boutique’ kiosks because no public hearings were held on the matter and no environmental impact assessment was conducted on the area, both of which are required by law. Voice of the Nightingale voiced its concerns [AM] with the government’s disregard for rule of law.

Translation Original Quote
It was made clear that the President has forgotten about the law when the issue has to do with the aesthetics of objects. The president announced that the construction of the kiosks were perfectly legal, the mayor had done everything correctly, but the kiosks weren’t so pleasing to look out and it wouldn’t be a good idea to have them as eye sores for the next few years.

The decision came just a few days after police used force against protesters, injuring a few and arresting others. Save Mashtots Park, a tumblr setup in support of the movement, named those detained while Civilnet, the news and analysis site of Yerevan-based think tank and development agency Civilitas Foundation captured footage of the scuffle.

The activists detained were later released and congratulatory messages left on the Facebook group of civic NGO Մե՛նք ենք այս քաղաքի տերը (This City Belongs to Us), who were instrumental in initiating the movement, highlighted frustration at how the Armenian president handled the situation. Group member Lena Nazaryan writes:

During his visit to Mashtots Park, Sargysan was also accompanied by Yerevan Mayor Taron Margaryan, who didn’t meet with protesters despite repeated pleas. Some, like Anahit Markosian, called for his resignation on the Armenian Environmental Network Facebook group page:

I think the latest events at Mashtots park call for mayor Margarian’s resignation. Not only has he shown his unwillingness and inability to solve the problem, but he also created a situation where the citizens and police are constantly being pitched against each other, thus putting both sides in the harms way. Such irresponsible and destructive behavior on behalf of the Mayor should not be tolerated.

Although the kiosks were ordered to be dismantled for all the reasons activists were not voicing, the longevity of the movement has been seen as a sort of awakening of Armenian civil society which has otherwise remained rather apathetic since the collapse of the Soviet Union some 20 years ago.

[…] the activists forced the country’s top official to carry out their demand and this is a remarkable achievement of civil activism in Armenia. These guys showed they’re real fighters, who stood there under snow and rain, fought back police and provocateurs and won their cause!

Writing on his organization’s blog when the movement started in February, Kirk Wallace, Armenia Office Program Director at the Armenian Environmental Network, has also seen a change.

Mashtots Park is already a victory for justice and the rule of law. Young people have sparked a renewed interest in social consciousness and have provided the first real glimmers of hope in decades.

While welcoming the development, however, some such as Unzipped noted the timing of the move, coming as it did just days before Armenia’s crucial parliamentary election. “Ha! Reports: #Armenia president visited the site, hijacked #OccupyMashtotsPark & ordered dismantlement of kiosks.How sweet #armelection #PR,” the blogger commented on Twitter.