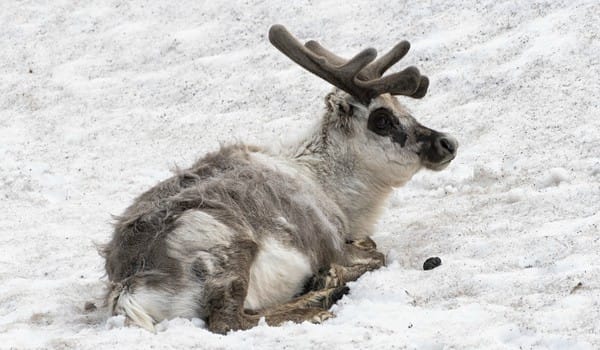 —
LONDON, 30 May, 2019 − Deep in the Arctic Circle, on the remote Norwegian archipelago of Svalbard, nature has found a way to outwit climate change: deprived of their normal diet, the world’s most northerly reindeer turn to seaweed.

Strangely, it is not cold and snow that have threatened them with starvation, but rain. In the warmer winter weather rain falls instead of snow, causing a crust of ice too thick for the reindeer to break through and reach the plants beneath which they need to eat to survive.

The Svalbard reindeer are a sub-species adapted to the extreme climate and known locally as Arctic pigs, because of their round shape and stubby legs.

Normally even with deep snow the reindeer can use their hooves to scrape the covering layer away to reach the grasses and plants underneath and survive the long dark winter. But recently Svalbard, which is at the most northerly point of the Gulf Stream, has been experiencing warmer winters

.Frequently it rains heavily rather than snowing, and the rain turns to ice when it hits the frozen surface, cutting off the reindeers’ food supply. The animals have taken to moving down to the seashore to graze to get enough nourishment until the spring comes.

“The reindeer are surprisingly adaptive. They have different solutions for new problems like rapid climate change, and most are able to survive surprisingly hard conditions”

Scientists who studied the reindeer report in the journal Ecosphere that they had assumed that global warming would make life easier for the reindeer, but found that the 20,000 Arctic pigs were struggling to survive the rain.

An earlier study found that the impact of climate change on the vegetation the animals eat had caused their average weight to fall by more than 10% in a 16-year period.

To find out about their new eating habits the scientists, from the Norwegian University of Science and Technology (NTNU), studied the droppings of the reindeer to establish what they had been eating.

This was no small task. Using GPS tracking devices attached to 2,199 animals the scientists tracked their movements over nine years. They compared the movements with nine years of data they had on ice thickness covering the snow, called basal ice: this showed that reindeer moved to the coast when the ice was thickest.

Biologist Brage Bremset Hansen and colleagues, who have been studying the reindeer for decades, were delighted to be able to prove that the newly acquired seaweed-eating habit was related to new conditions on Svalbard.

But the reindeer don’t exclusively feed on seaweed; the stable isotope and GPS collar data show instead that they eat it as a supplementary source of nutrition. “It seems they can’t sustain themselves on seaweed. They do move back and forth between the shore and the few ice-free vegetation patches every day, so it is obvious that they have to combine it with normal food, whatever they can find,” Hansen said.

Eating seaweed also comes at a cost – it gives the reindeer a lot of diarrhoea – probably from the salt, according to Hansen.

Although eating seaweed isn’t ideal, he said, it does show the animals are able to adapt, which is the good news. “The bigger picture is that, although we sometimes observe that populations crash during extremely icy winters, the reindeer are surprisingly adaptive,” he said.

“They have different solutions for new problems like rapid climate change, they have a variety of strategies, and most are able to survive surprisingly hard conditions.” − Climate News Network

This post was previously published on climatenewsnetwork.net and is republished here under a Creative Commons license CC BY-ND 4.0.
—
—