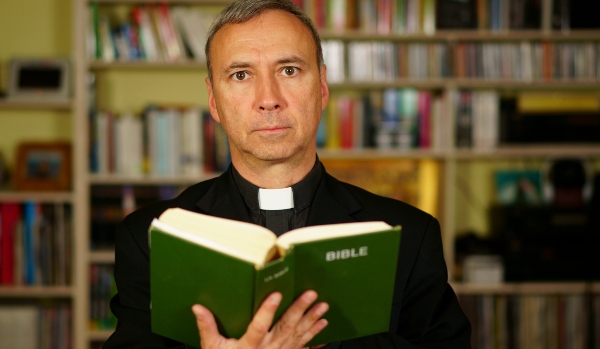 Skeptics face a quandary: When we declare that supernatural dogmas are false fairy tales, believers who devote their lives to those dogmas may feel bitterly insulted. This makes it difficult for well-meaning freethinkers and well-meaning churchmen to hold open, sincere, friendly discussions.

How can we make dialogue possible?

First, it’s glaringly clear that some believers – especially Muslims – are outraged when their faith is challenged. Remember the death warrant issued by the Ayatollah Khomeini against novelist Salman Rushdie for “blasphemy”? Remember deadly riots that erupted because a Danish newspaper printed forbidden cartoons of Muhammad? Remember the massacre of the Charlie Hebdo magazine staff in Paris? Some Muslims felt so insulted they became murderous.

Currently, Muslim nations want the whole world to pass laws making it a crime to “defame religion.” In addition to Islamic lands, Russia and a few European nations have done so. For example, an Austrian woman was convicted because she declared in a forum that Muhammad’s marriage to a six-year-old girl constituted pedophilia. Last year, the European Court of Human Rights upheld her conviction. Similarly, a half-dozen Russian skeptics have been jailed under a 2013 law against “insulting believers’ religious feelings.”

Such laws clash with the principle of free speech, which normally lets everyone criticize anything and everything.

Why do believers react so strongly? Bertrand Russell wrote that it’s because they realize, subconsciously, that their supernatural beliefs are senseless, so they cannot tolerate any challenge.

In the face of all this, it’s difficult for sincere doubters to talk with sincere believers without causing bad feelings. We probably won’t fall into discourse with Muslim extremists, but how do we handle pious neighbors, friends and family members? Here’s the wrong way:

One day, two flashy-looking evangelists came into my newspaper office. I tried to tweak them light-heartedly – but within minutes, we all were screaming at each other, purple-faced. It was awful.

Is there a better way? I really can’t tell a churchman “I respect your right to worship supernatural beings” – because I don’t respect it. I think it’s stupid.
Here’s the only workable approach I know: Be polite. Stay calm. Be reasonable. Don’t assert your doubt too forcefully. Instead, ask questions designed to make the believer see flaws in his or her faith. For example:

Q: The Bible (Exodus 31:13) decrees: “Whosoever doeth any work in the Sabbath day, he shall surely be put to death.” What about all the police, firefighters, paramedics, hospital staffs and others who work on Sunday? Should the Bible be obeyed?

Q: Deuteronomy 22 commands that brides who aren’t virgins shall be taken to their fathers’ doorsteps and stoned to death. Should Christians obey that chapter?

Q: Leviticus 20:13 mandates that gay males “shall surely be put to death; their blood shall be upon them.” Should the Bible be obeyed?

Q: The Holy Book advises how to buy and sell slaves. Leviticus 25:44 says: “Both thy bondmen, and thy bondmaids, which thou shalt have, shall be of the heathen that are around you; of them shall ye buy bondmen and bondmaids.” Exodus 21:7 gives rules to follow when “a man sell his daughter to be a maidservant.” Should the Bible be followed in this regard?

And, of course, the clincher:

Q: Why does a merciful God let children die of horrible diseases, doing nothing while parents pray desperately? And why does He let tsunamis, twisters and the like kill multitudes? And why did He create foxes to rip rabbits apart, cobras to kill children, etc.?

Maybe polite questioning is the best course in dealing with religious believers who surround you. If that doesn’t work, we can just smile to ourselves and avoid debates.

Facebook51TweetPinEmailShares51
wpDiscuz
Share this ArticleLike this article? Email it to a friend!
Email sent!