Get Daily Email
Join/Login CLOSE
Home / Ethics & Values / Do Better, We Can Because We Are Better 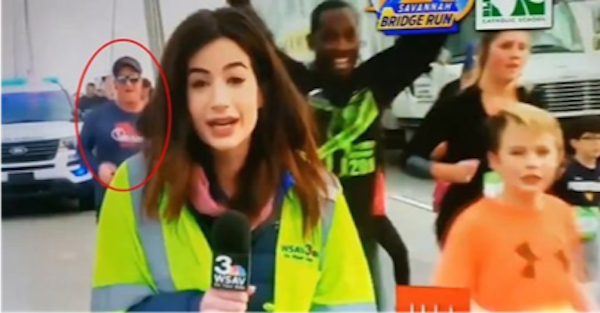 Tommy Callaway, a participant on a 10k race in Savannah Georgia decided to slap the backside of reporter Alex Bozarjian, while she was on live news television as he ran past her. Over twelve million views of the video have been racked up so far. Ms. Bozarjian went on talk shows to express how she was affected by the act claiming she was hurt emotionally and physically. She said that he “Helped himself to a part of my body” and she tweeted about it ending her statement, “Do better.” She handled it with dignity and professionalism, and with appropriate action by filing a police report for sexual assault.

Tommy Callaway, a married father of two daughters, Boy Scout leader and youth minister of his church, was banned for life from participating in and future races of the sponsoring organization. He was publically thrown out of the Boy Scouts that he was part of for thirty-three years, arrested by the police and booked on charges of sexual battery not to mention he has been flashed online to millions as a creep and misogynist. His apology on national television was deemed incredulous and insincere.

Ok, that is the story. But it isn’t the story that I want to focus on. I want to take a closer look at the public reaction to this incident. Americans love a good story that includes outrageous acts caught on film, a cute girl as a victim, the hypocrisy of a church youth minister and Boy Scout leader and the public flogging of the culprit as far and wide and they can humiliate him for humiliating the innocent victim who was doing her job at the time. It is as juicy as twelve million people could ask for. This was even better than the outrage of that dentist that shot Cecil the lion in Zimbabwe that no one remembers anymore. People are outraged, but just for a little while. The lessons to be learned here can not fade upon the next Instagram flash.

However, it wasn’t the worst crime ever to be caught on live television.

The Oswald Dallas jail transfer caught Jack Ruby shooting Oswald on live television in front of too many policemen to count. Egyptian president Anwar Sadat was ambushed and killed on live television while reviewing his troops during a parade. Why was this incident, where nobody died or was even seriously injured, such a lightning rod of such media attention? Instant social media reactions available now as opposed to the other incidents that happened before we could post our outrage could be a huge factor. Also, the fact that we can sit back and condemn, throw slurs and condemnation in total anonymity. Callaway will surely face appropriate public criticism for a long time to come and will answer to a criminal charge that he cannot escape.

Some have launched criticism on Ms. Alex Bozarjian, by saying she is making too much of it. One such comment was, ”So you got your ass slapped, not the first time and probably won’t be the last time, get over yourself.” Others attacked her professionalism as a reporter which had nothing to do with it. I ask the question, “What have we become as a human race that our sensitivity to people’s suffering, whether massive or merely inconvenient, is ignored?”

Women have been objectified, touched inappropriately and brushed aside when they complained for centuries. We should have been better than that and now we are. It took women to say, “It ends here and now,” publically, at the risk of losing all to make it happen. I respect that and I support that. Callaway’s two-second slap on her butt was probably just a playful act in his mind, no harm no foul, as it has been in offices, bars, parties, and clubs for decades. Considering there was a police car twenty feet behind him, I doubt he felt that his actions would rise to the level of sexual battery but the surprise of surprises to him, it did.

We are adults and we don’t act on our impulses and hormonal instincts just because it gratifies us. We are better than that. Women deserve us to be better than that. Women want to be able to trust us, understand us and be part of society shoulder to shoulder with us. They deserve that and if men want to be treated like a prince, in our homes, at work or in public, then we need to treat women like princesses. It is our own lack of self-esteem that makes us treat anyone, men or women, with less than the respect that they deserve. We are better than we give ourselves credit for. Sometimes we just don’t act like it.

There is one more crime that Callaway committed that will never be heard in front of a judge. Our world is so horrifically divided with imaginary lines that people draw. Those lines divide us into races, religious beliefs, political sides, socio-economic divisions, men vs. women and so many more “Us vs. Thems.” People shout, fight and even kill those on the other side of those lines. Callaway, in a thoughtless act of denigration upon a total stranger, made the line dividing men and women deeper, thicker and pushed us farther apart at a time in our history that we cannot afford any more divisions. There is no court, no public scourging, no social media humiliation to fix that error. Callaway does not represent us all, but from the comments I have seen, women are quick to paint us all with the same brush. “Men are pigs, men are all abusers, potential Bill Cosbys and Harvey Weinsteins.” No apology is going to erase the stigma of centuries of misogyny but our example of decency and understanding with empathy the plight and issues women endure by the lesser of our male brothers might begin to go a long way. Alex Bozarjian nailed it with just two final words, “Do better.”

Jim Killon is an American born humanitarian, author and exhibited artist currently living in the Peruvian Andes where he created his non-profit project Changes for New Hope. To date over 6000 disadvantaged children have been helped through this project. His latest project is focused on Mindfulness, meditation and motivation and is called MindEncounter. His list of e-books can be found on Amazon.com You can learn more about Jim and his work on his website at www.changesfornewhope.com

Facebook11Tweet2PinEmailShares13
wpDiscuz
0
0
Would love your thoughts, please comment.x
()
x
| Reply
Share this ArticleLike this article? Email it to a friend!
Email sent!