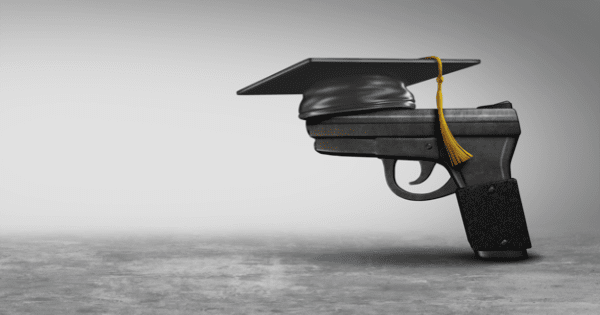 It all began with the shooting from the University of Texas tower in August of 1966. It was the first time a person opened fire on a campus and began indiscriminately killing people.

Again this August we remember the UT tower tragedy and those that followed. We remember the lessons learned. Most schools and many businesses instruct students and staff to think, plan, and prepare in order to survive an active shooter. A video, “Surviving an Active Shooter Event,” is worth watching. Run if you can, hide if you can’t get away, fight only if you must.

Some politicians think the solution for campus gun safety is for more students to have guns. Texas enacted a law allowing individuals with concealed carry licenses to bring their handguns to public colleges and universities. But consider:

College campuses have a high concentration of people. Millennials, aged 18-33, are the country’s most-stressed generation. Suicide is the second leading cause of death among college students. Homicide is the second leading cause of death for people aged 15-24 years. More than half of all people who suicide do so with a gun. Drug use is highest among people in their late teens and twenties. 39 percent of college students engaged in binge drinking in the past month.

Guns on college campuses; what could go wrong?

Other politicians believe we can create campus safety if we train school staffers on the use of firearms. But considering the rigorous training police cadets receive, I think it would be more efficient if we train police on how to teach our students.

In the meantime, schools are grasping at straws in their efforts to prevent active shooters.

Some schools screen for firearms with metal detectors. Others screen for mental health by focusing on behavior.

Some think gun locks and background checks would suffice. Others want to strengthen laws. A growing number of people support limits on access to high-capacity magazines and assault-style weaponry.

Some cry for enforcement of existing gun laws. Others want new laws, laws that would regulate the gun – and the gun owner.

“Guns don’t kill people, people kill people.” Everyone has heard that argument. Some may think it realistic, sceptics may think it fallacious, and others think it oversimplifies the issue.

Nonetheless, I think that it’s neither guns nor people that kill people. I think bullets kill people. I’ve heard it said that the average gunshot victim has 2.3 bullet wounds. Instead of gun control laws, I would like to see some bullet control laws.

I don’t want to make it illegal to own bullets. I would just like legislation to put a state tax on each bullet. A $10 “tax” on each round is not going to affect the homeowner who wants to keep a gun for self-defense. It may cause hunters to aim more accurately so as not to waste any ammunition trying to bag that buck. Of course, I would exempt law enforcement from such a tax; I’d even advocate for tax-free bullets if used only at a registered rifle range.

Most states have a ‘sin tax’ on items like tobacco and alcohol in order to discourage their use. Perhaps a special tax on bullets would reduce some gun deaths. After all, if an active shooter fires multiple rounds, rat-a-tat-tat-tat-tat-tat-tat, that would be 10, 20, 30, 40, 50, 60, 70 dollars. Fifty rounds would cost the shooter $500. And that $500 in tax revenue could be spent on hospital trauma care centers or survivor treatment; they are the ones who have to deal with the fallout from gun violence.

And if anyone argues that people will simply evade such a tax, they should remember why Al Capone was sent to prison.

Some say more cops on campus will prevent school shooters. Others think there is nothing we can do; we need to accept it as a way of life. Others think that prayer is the answer.

“Our prayers are with all who were harmed by this evil act,” a governor may exclaim. ”Please join us in praying for all involved,” the Attorney General may intone. The representative may pray for the dead and the senator is keeping the victims and the first responders in his prayers.

But after “Amen” is said, can we discuss how we’re going to stop the next shooter? I pray our lawmakers will do something.

I’m not going to wait for politicians to act. I encourage all to get help for any who are thinking of harming themselves or others. And know what to do in case of an active shooter. Have a safe semester.

Thoughts in this essay have previously appeared in the following periodicals: https://www.sacurrent.com/sanantonio/first-words-what-could-go-wrong-with-campus-carry/Content?oid=2492516

Facebook48TweetPin1EmailShares49
wpDiscuz
0
0
Would love your thoughts, please comment.x
()
x
| Reply
Share this ArticleLike this article? Email it to a friend!
Email sent!